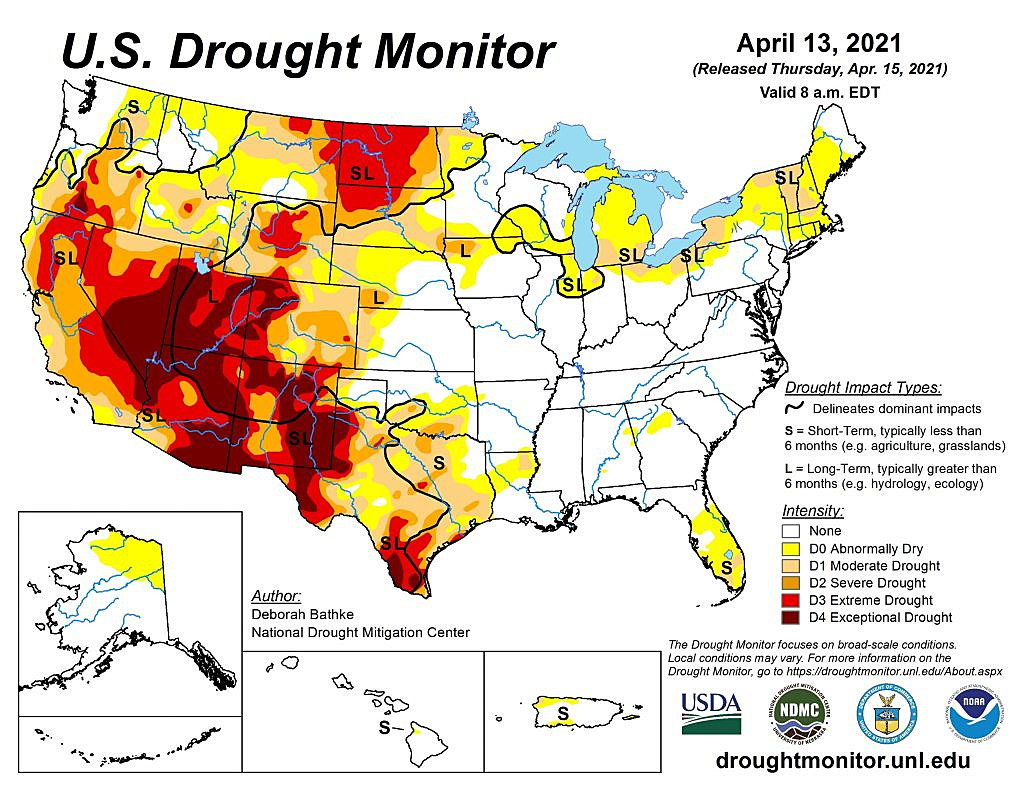 (CN) — The prospects for alleviating the drought afflicting a large portion of the American West are not good, according to weather forecasters with the National Oceanic and Atmospheric Administration.

“Drought is expected to expand and intensify in areas of the Pacific Northwest extending into the Rocky Mountains, parts of Montana and the intramountain west,” said Dan Collins, with the Climate Prediction Center during a conference call Thursday morning.

The drought is likely to intensify in California and other parts of the West Coast, Collins said, since precipitation is rare after spring in the Golden State’s Mediterranean climate.

Some level of drought covers approximately 92% of the American West, according to the U.S. Drought Monitor published Thursday.

“Conditions once again deteriorated in Oregon this week with expansions in extreme and exceptional drought,” the report states. “The warm, dry winter added to deficits that had been in place for more than a year, leaving soils extremely dry and limiting runoff.”

The Klamath River, which marks much of the border between Oregon and California, is running so low that federal officials announced Wednesday that the U.S. Bureua of Reclamation will offer $15 million in aid to farmers in the Klamath River Basin.

Idaho has also experienced increasingly dry conditions with little to no precipitation falling in the state for going on two months, meaning many areas in the state are below the 10th percentile in terms of overall precipitation.

“Another week without rainfall has continued to build upon longer deficits,” the report says.

The Four Corners region remains one of the hardest-hit areas in the country, as a lack of precipitation dating back years was compounded by a monsoon season that never materialized last summer.

“Another week of hot, dry weather showed its impact on streamflow, soil moisture, and vegetation,” the report says about Arizona. “It’s worth noting that high temperatures ranged from 10 to 20 degrees above normal last week and that many areas are now at record dry levels for the past 12 months.”

Currently, the entire state of Arizona is experiencing some form of drought. Exceptional drought — the most severe category — blankets most of the state, with a large pocket of extreme drought making up much of the rest.

Drought encompasses all of Nevada, with 40% of the Sliver State firmly in the worst category of drought.

NOAA said Thursday that dry conditions and a lack of water allocations is already affecting agricultural and livestock production.

‘Decreases in water allocation and reduced or negligible forage are causing producers to respond by culling and selling herds,” the report says.

Cal Fire announced this week it is beefing up its crews and calling them in early in response to what is anticipated to be an early and busy wildfire season in the state.