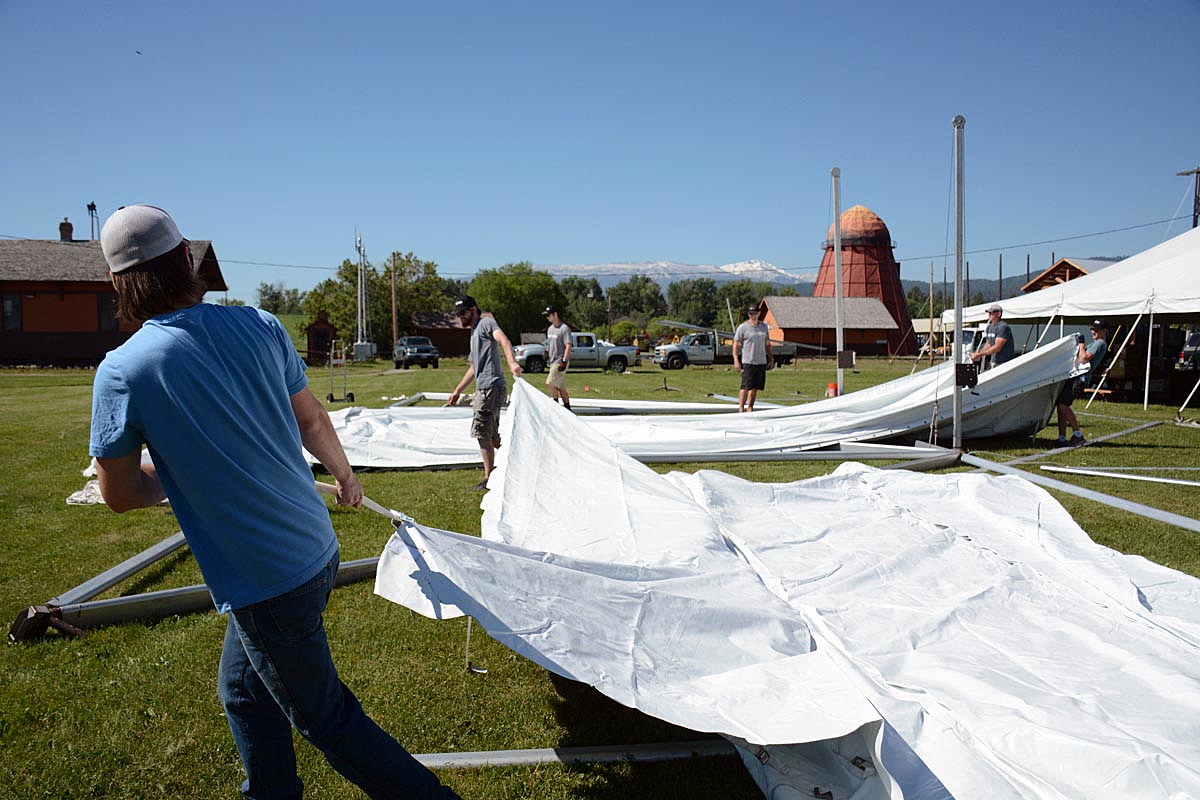 COVID-19 has forced the Backcountry Hunters and Anglers to take its annual Rendezvous outdoors. But for a group that promotes activities on public land and waters, it kind of makes sense.

This weekend, the Missoula-based Backcountry Hunters and Anglers will hold its 10th national Rendezvous in the open spaces at Fort Missoula. The two days offer several demonstrations and panel discussions of all things hunting and fishing, in addition to dozens of vendors.

But this year, the Rendezvous will also offer an evening bonfire, whiskey tasting and camping under the stars, one of the benefits of having everything outdoors.

In a promotional video, BHA president and CEO Land Tawney trumpeted that this 10th gathering returns the group to the site of its first Rendezvous. But that first Rendezvous in 2011 was really just a big dinner for 100 people, because the group was still small, having only gotten going about a year earlier, said Rendezvous coordinator Sawyer Connelly.

Since then, each Rendezvous has gotten a little bigger and a few have been held in Boise, Idaho, and Spokane, Wash. So the BHA staff has learned how to throw bigger versions of their kind of party. But they’ve all been indoors until now.

“Heritage Hall was where we had the first Rendezvous. It was really small. This will be huge,” Connelly said. “We started planning this one during the pandemic, and Grant (Alban) always wanted to do this campout rendezvous. He was finally able to twist Land’s arm and had a good excuse because we can socially distance.”

The organization had to skip last year’s Rendezvous because of the pandemic. To make it happen this year, BHA is offering the options of either attending in person or online. But the online portion will be more than boring Zoom presentations, Connelly said, which is probably good news to the 500 or so who’ve registered virtually.

“It’s essentially going to be a live broadcast, like a sporting event,” Connelly said. “I have a production team of four and we’re able to send live video into a production studio in that building, where the producer-director will be editing on the go and then broadcasting it out. I’m a little nervous, but Land likes to push the boundaries.”

On Wednesday, BHA staff was busy erecting tents, making signs and assembling power connections, generators and supplies in anticipation of about 500 members arriving on Thursday. One of the challenges has been figuring out how to get power to all the food trucks, sound systems and other electrical equipment. Then there are portapotties and other amenities that organizers didn’t have to think about during previous rendezvous at the Holiday Inn.

But it’s all necessary for people to have a good time. And when there are plenty of other sportsmen’s organizations to join, Tawney said that’s what draws people to BHA: having fun. When he was younger, Tawney was a member of Hellgate Hunters and Anglers, and he took some lessons from those early years.

“Being at Hellgate Hunters and Anglers, we learned how to have fun as an organization, and really built up a local rod and gun club in the early 2000s. There hadn’t been many that had seen growth in this state for a while. And we did that with fun,” Tawney said. “The work that we do is very serious, whether that’s at the state Legislature or in Washington, D.C. Policy matters – both on fighting bad policy and getting good policy passed. But policy can be a slog, and we gotta have fun in the meantime. And that’s what Rendezvous is about.”

That “fun” aspect plays well with everyone but especially younger members, which the organization actively courts through college programs. As a result, about 70% of its membership is younger than 45 and quite a few are new to hunting or fishing.

Their energy can keep the organization from aging out, but Tawney wants to broaden BHA’s appeal to people of all backgrounds who are interested in hunting and fishing. One of the Rendezvous events will feature members of the Blackfeet Nation teaching attendees how to butcher a bison.

“I want our organization to look more like America,” Tawney said. “We need to increase diversity, partly just for voting, conservation and advocacy. If we do not do that, ultimately we are left behind.”

Tawney took the reins of BHA in 2013 and has watched the membership grow from around 1,000 to around 40,000 today in all 50 states and a few Canadian providences. That growth has allowed BHA to transition from mainly promoting advocacy to doing a lot more local conservation and service projects, from cleaning up public land in North Carolina to stringing wildlife-friendly fencing in Arizona.

Tawney credits local chapter leaders and volunteers with sparking those kinds of projects.

“The Trashy Squirrel contest started in North Carolina where they have a squirrel hunting outing and picked up trash at the same time. And we were like, ‘Whoa, we should be doing more of that.’ That’s just us seeing a good idea and scaling it up,” Tawney said. “That boots-on-the-ground getting your hands dirty – that has changed, and that is awesome. It gives people more of an opportunity to engage with the organization. For some people, policy is not something they gravitate toward.”

In addition to defending public land and water, and protecting and restoring wildlife habitat, the organization emphasizes the importance of being an ethical hunter or angler. Hunting ethics focus on the concept of fair chase – not using a lot of advanced equipment that gives hunters more advantage over game animals – and ensuring a clean kill so animals don’t suffer.

One of Friday’s panel discussions will feature a debate about whether hunters should consider their tag filled if they wound an animal that gets away.

Recent legislation in Montana and Idaho has removed the fair-chase element from predator hunting, especially with wolves. Snares, hunting at night with lights or night-vision goggles, and using bait are now allowed. For animal-loving Americans who already oppose hunting, the new laws add fuel to the fire.

“We’ve got to be the hunters with the right heart,” Tawney said. “I think we have to be humble and talk about this commitment we have to conservation. The more you can talk about how you’re doing things, why you’re doing things, it’s not going to make everybody happy, but I would say with the general public, we will stay in good standing. And that’s exactly what we’re doing this weekend: teaching and sharing. Filling (member’s) buckets, making them overflow and having them go back and share what they’ve learned.”