A University of Montana study adds more evidence that climate change is contributing to more and bigger wildfires, as evidenced by this June’s high temperatures and early season fires in Montana.

This week, the University of Montana College of Forestry and Conservation, along with the University of Wyoming, published recent research indicating that high-elevation forests in the central Rocky Mountains now are burning more than at any point in the past 2,000 years.

The research paper was published Monday in the peer-reviewed journal Proceedings of the National Academy of Sciences.

Compared to the rest of the West, Montana was fortunate last year when it came to wildfires. But other states suffered such devastating fires in 2020 that UM fire ecology professor and lead author Philip Higuera and his colleagues suspected that the size and severity of wildfires were becoming unprecedented.

Last year, in Colorado where Higuera does research, wildfires kept burning into October, unusually late in the year. By the end of the season, Colorado had seen three of its largest fires on record and the 2020 wildfires were responsible for almost three-quarters of the total area burned in high-elevation forests since 1984 in their study region. The forests of the West Coast had their worst fire season on record.

Fortunately, during 15 years of research, Higuera and his team have collected sediment cores from 20 lakebed locations in Colorado and Wyoming that show how often and to what extent certain events have taken place over thousands of years.

“When the smoke settled (in 2020), we thought ‘Wow, we may have witnessed something truly unprecedented here.’ So we combined the existing records for the first time and compared them to recent fire activity. To our surprise, 2020 indeed pushed fire activity outside the range of variability these forests have experienced over at least the past two millennia,” Higuera said.

The charcoal layers in the cores showed that since 2000, wildfires are burning nearly twice as much area, on average, compared to the last 2,000 years. Fires are also recurring more frequently.

High-elevation forests – which aren’t as fire-prone as those at lower elevations – historically burned once every 230 years on average, but that time period has shrunk to around every 120 years. That’s more fire activity than occurred during the “Medieval Climate Anomaly,” around 1,200 years ago the last time Earth’s temperatures spiked. Back then, fires burned every 150 years. 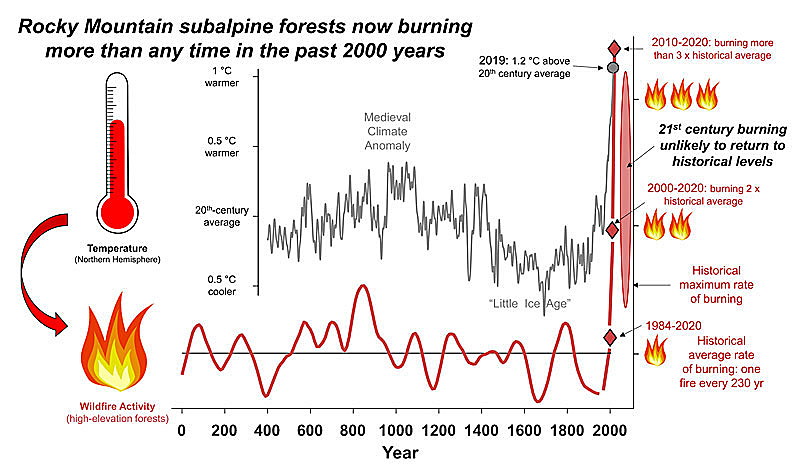 Wildfires are exacerbated by thick, often similarly aged tree stands that are the result of fire suppression carried out by the U.S. Forest Service during the 20th century. Then waves of pine beetles – which multiplied due to fewer long, cold winters in the early 2000s – killed the dense stands in some forests, creating more fuel for fires.

The fact that people now cause 80% to 90% of wildfires doesn’t help matters. Decades ago, that percentage was only about 50%, partly because fewer people roamed the woods.

But the megafires of the past two decades have ramped up due to the increasingly warm, dry conditions resulting from greenhouse gases trapping an increasing amount of heat in the Earth’s atmosphere. The resulting drought coupled with abnormally high temperatures and winds create tinderboxes just waiting for an errant spark.

“It isn’t unexpected to have more fire as temperatures rise,” said UM doctoral candidate Kyra Wolf. “Our records show that fire tracked past variations in climate just as it does today. What’s striking is that temperatures, and correspondingly fire, are now exceeding the range that these forests have coped with for thousands of years – largely as a result of human-caused climate change.”

Already this June, Montana has endured daily highs in the 90s and even triple digits. All those who have moved into Montana over the past two decades aren’t aware of the change, but temperatures that high normally don’t occur in the state until August, if then.

Missoula has already seen three days top out in the 90s, something that didn’t used to occur in Western Montana. Billings and Miles City broke records earlier this week with temperatures of 104 and 109 respectively. Miles City was 10 degrees hotter than its previous record.

While summers are getting hotter and drier, winters are doing the same. The past mild winter didn’t bring as much snow to the mountains. Due to the high temperatures, what snow was there has melted earlier than usual, leaving some river basins, such as the Bitterroot, Missouri headwaters, upper Yellowstone and Sun-Teton-Marias, with no snow as of mid-June.

Only 10% of the state isn’t suffering drought. So it shouldn’t be surprising that large fires are already surging through forests near Red Lodge and White Sulphur Springs. No doubt more wildfires will spread across the state as the summer continues to dry out and people flood into the state for the tourists season.

For decades, scientists have predicted that a warming climate would increase wildfire activity in high-elevation forests beyond what has historically occurred, Higuera said.

Higuera hopes this paper helps illustrate the significant impacts of human-caused climate change on wildfire, forests and the human communities that live among them. Scientists, foresters and fire experts agree that logging isn’t the only answer when wildfires such as California’s August Complex burn almost a million acres.

Prescribed burns, such as those carried out this spring by the Bitterroot National Forest, can be more effective but are limited to wetter times of the year and they can face societal resistance. In the meantime, forest managers are reluctant to let some wildfires burn if they don’t threaten people.

So limiting the effects of climate change should be another tool to help battle megafires.

“It may sound dire, but it’s critical to remember that we have ample opportunities to limit or reverse climate warming while still working to adapt to the increasing fire activity expected in upcoming decades,” Higuera said.