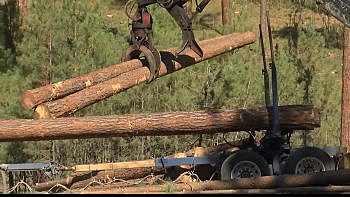 A Missoula federal magistrate must decide if the Lolo National Forest cut too many corners in order to approve a Ninemile logging project. With the project scheduled to start this fall, she has to move fast.

On Tuesday, Missoula federal Magistrate Judge Kathleen DeSoto heard arguments on whether the Lolo National Forest did enough to consider the effects of the Soldier-Butler logging project on grizzly bears, elk and streams along the Ninemile valley. If forest managers failed to do sufficient analysis, the project’s three timber sales – Butler, Soldier-Blue and Pine – may be delayed for at least a year.

Attorneys Kristine Akland and Timothy Bechtold, representing Alliance for the Wild Rockies and Flathead-Lolo-Bitterroot Citizen Task Force, argued the Lolo National Forest hedged certain numbers when it came to the length and density of roads existing in grizzly bear territory while giving no numbers for other measurable standards such as the number of snags or percentage of elk cover remaining in certain areas after the project is over.

“The standard is quantitative. (Saying) ‘greater amounts’ is meaningless,” Bechtel said. “Again, it’s a standard they’re required to meet. And simply saying (it’s) so doesn’t make it so.”

The project was created to log or burn about 10,000 acres along the northeast side of Ninemile Creek and harvest 18 million board feet. About 3,000 truckloads would be required to carry the timber out. To enable those trucks, the Lolo National Forest intended to build 7 miles of new roads and 9 miles of temporary roads.

The U.S. Fish and Wildlife Service issued a 2012 biological opinion on the Lolo Forest Plan that justified the 7 miles, with the knowledge it would result in a limited “take” of grizzly bears. Under the Endangered Species Act, “take” means having an effect on a species from disturbance to death. Research has shown that higher densities of roads or building into roadless areas leads to more bear deaths due to human conflict.

The problem, Akland said, is that 2012 Biological Opinion wasn’t able to consider 137 miles of “undetermined” roads that were discovered later and reported in the 2019 Soldier Butler analysis. Akland said the 2012 Biological Opinion was flawed, because it used a baseline of fewer roads, which would predict a lower incidental take of grizzlies. In reality, the take of bears is likely higher.

If the 137 miles of road were taken into account, the Lolo National Forest would likely have to zero out the miles of road it could construct without endangering too many bears.

DeSoto questioned Akland, saying the Forest Service had argued that the Biological Opinion applied to the entire Lolo Forest Plan, not the specific project, therefore it didn’t limit the project.

Federal Department of Justice attorney Anthony Ortiz argued that the Lolo National Forest is already consulting with the Fish and Wildlife Service for a new biological opinion for the Forest Plan. Meanwhile, project managers went ahead and calculated a baseline road limit specific to the Soldier-Butler area, Ortiz said, which the Fish and Wildlife Service analyzed in 2020. The project is stand-alone, Ortiz said, so there is no error.

DeSoto questioned why each project could create its own baseline when the overall forest baseline was not only set but also based on bad information.

Taking over from Akland, Bechtold argued the Soldier-Butler project didn’t follow other standards and parts of the Lolo Forest Plan and therefore violated the National Forest Management Act.

In particular, the project cuts down too many trees to maintain enough crown cover to give elk protection from the elements, particularly in winter. When project managers realized they would have less than the required 50% cover, they eliminated 96 acres and said certain areas would receive different treatments to try to increase cover.

Bechtold said he doubted that was sufficient and the project analysis didn’t crunch the numbers to show how the treatments would equal the standard of 50% cover. Similarly, the analysis didn’t quantify how the project would meet forest standards of the number of tree snags that should remain.

It was just hand-waving, Bechtold said, and that’s why it violates the Forest Management Act.

“One thing that’s important about elk winter range is that it’s crucial for elk survival,” Bechtold said. “The whole notion of having our elk being able to stay on public lands as opposed to going on private lands in wintertime is a critical part of elk management. As much as possible, I think all wildlife managers want to keep elk on public lands. If the habitat isn’t there, they’ll choose to go to haystacks.”

DeSoto asked Dept. of Justice attorney John Tustin how the public could show the Forest Service wasn’t complying with their own standards if the project analysis didn’t provide verifiable numbers.

Saying time is of the essence, DeSoto asked the attorneys about timelines.

Tustin said the projects were scheduled to start in September but had no hard date. It depended on the operators, who could be ready any time from Sept. 1 through mid-October. But the need to go forward was based on completing road building before conditions get too muddy in the late fall.

The attorneys agreed to a reduced objection period of 10 days if needed but the plaintiffs could still file a temporary restraining order if operators started early. DeSoto said Judge Dana Christensen would probably end up reviewing her recommendation, so that could add time.