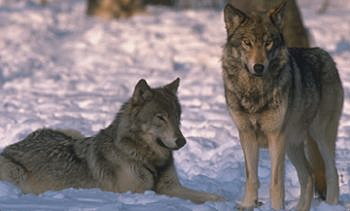 MADISON, Wis. (CN) — Six Wisconsin Chippewa tribes sued state government officials on Tuesday in the latest attempt to put the brakes on a gray wolf hunting and trapping season planned for this fall that has been roiled in controversy.

The tribes’ complaint filed in Madison federal court says the wolf hunt planned to start on Nov. 6 and its inflated kill quota violate multiple long-standing tribal rights as held by treaties they signed with the federal government in 1837 and 1842. They want the court to declare that the fall hunt violates their treaty rights and scrap it completely.

The tribes are represented in their lawsuit by attorneys with the Chicago and Washington offices of Earthjustice, a nonprofit dedicated to litigating environmental issues.

Wisconsin Department of Natural Resources Secretary Preston Cole is a defendant in the complaint, in addition to the seven members of the Wisconsin Natural Resources Board, or NRB, a body that sets policy for the DNR whose members are appointed by the governor and approved by the state Senate.

Wolf hunting in the Badger State has been under withering scrutiny since a hunt in February—rushed into being by legal action from conservatives and hunting advocates after the Trump administration removed the gray wolf from the federal endangered species list in late 2020—saw 218 wolves killed in less than three days, exceeding state hunters’ kill quota by 99 wolves and generating widespread bad press.

Amid the aftermath of the February hunt, the NRB in August approved an unprecedented second hunting and trapping season for the calendar year by a split vote after hours of tense deliberation and public testimony from both outraged wildlife advocates and those in support of hunters’ rights. The board ultimately set the fall hunt kill quota at 300 wolves, more than double the recommended 130-wolf quota proposed by the DNR.

At least one NRB member worried at that August meeting that lawsuits over the hunt and the quota were practically inevitable, and Tuesday’s filing is the second so far after animal rights groups sued in Dane County Circuit Court late last month to nix the hunt and void the 2011 Wisconsin law that mandates a gray wolf season if the species is not on the federal endangered species list.

The Chippewa, or Ojibwe, people had been living in the Upper Midwest, including what is now Wisconsin, for centuries by the time they entered their first treaty with the United States in the 1820s. Two additional treaties cited in Tuesday’s lawsuit—one from 1837, another from 1842—ceded tribal lands to the federal government, but the tribes retained their right to hunt, fish and gather on the ceded lands.

The tribes argue in their filing that the history surrounding the 1837 and 1842 treaties not only demonstrates the reserved right of tribes to hunt, fish and gather on the lands, but “that same history shows that the tribes also retained the right to conserve and protect the key species they relied upon for their livelihood, to maintain healthy populations of those species, and to ensure their continued existence.”

Among the rights protected by the treaties and violated by the DNR and NRB’s actions over the fall hunt, the tribes say, are a claim to a half-share of virtually all the natural resources in the ceded lands, including wolves, and the court-established right that those resources be managed according to sound biological principles aimed at conservation.

The tribes say their right to their share of the wolf quota was essentially nullified by some NRB members pushing for a higher kill quota for this fall’s hunt to get around the tribal take. They also claim the 300-wolf quota has no basis in sound biological principles and threatens conservatorship of the state wolf population, particularly because of the overkill of the February hunt.

Animal rights groups attest, with some support from the scientific community, that the February hunt, which occurred during the wolves’ breeding season, could have killed off as much as one-third of Wisconsin’s gray wolf population.

Wisconsin is the only state that allows hunters to use dogs in their pursuit of wolves, a tactic the tribes say accounted for 86% of the wolves killed in February. Wisconsin hunters can also use bait to attract wolves and can pursue them at night, but not with dogs. Trappers can use foot-hold traps or cable restraints to ensnare wolves.

A DNR spokesperson offered no comment on the tribes’ lawsuit on Tuesday. The spokesperson confirmed that the agency has received 27,388 total applications for the fall wolf season, including more than 16,000 for a harvest license. Planning for the fall hunt is ongoing, she said, and the drawing to determine which hunters get a wolf license has not yet been conducted.

Gray wolves are held in high esteem as brothers to the Chippewa tribes, the tribes’ complaint explains, that “exemplify perseverance, guardianship, intelligence and wisdom” and not only play an integral role in the health of their ecosystems but share a special cultural partnership with the tribes.