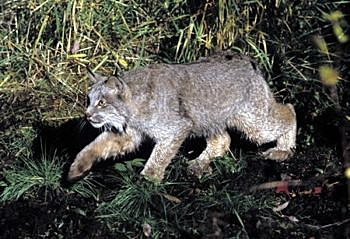 After listing the Canada lynx as threatened more than two decades ago, the U.S. Fish and Wildlife Service has reaffirmed its responsibility to develop a recovery plan for the wild cat instead of trying to delist the species.

On Monday, the U.S. Department of the Interior and the U.S. Fish and Wildlife Service reached a settlement with conservation groups in Missoula federal court, where they agreed to produce a draft recovery plan for the lynx by Dec. 1, 2023 and then have the final version finished one year later.

This follows the Biden administration’s withdrawal of a December 2017 U.S. Fish and Wildlife Service decision to write a rule delisting the lynx. The agency also said during settlement negotiations that it intends to review and update the Species Status Review published under the Trump administration in October 2017, which was supposed to describe the lynx’ current status and future viability.

“It’s nice to see the U.S. Fish and Wildlife Service reverse course, apply the best available climate science, and put its time and energy into recovery planning for the species. This sets the agency up for success in terms of a legally sound, science-based plan while the Biden administration is still in charge. This is a victory for lynx, science, and for everyone who values healthy ecosystems,” Bishop said.

The U.S. Fish and Wildlife Service listed the lynx as threatened in 2000 but never wrote a recovery plan. Conservation groups finally sued in 2013 to force the agency to write a plan.

As the name indicates, recovery plans are essential to a species’ recovery, because they detail what the agency needs to do to recover a species and include maps of habitat that needs to be preserved because it’s essential to the species’ recovery. Recovery plans also include goals that must be met – such as population size, density or distribution – before the species can be delisted.

In May 2014, Missoula federal judge Donald Molloy agreed with the conservation groups that a delay of 13 years was excessive for a recovery plan that’s supposed to be finished less than 3 years after delisting.

“The service has repeatedly stated that it will initiate recovery planning for the lynx,” Molloy wrote in 2014. “The service cannot delay its statutory obligation indefinitely.”

However, that’s what the Service attempted to do after the Trump administration took control in January 2017.

The U.S. Fish and Wildlife Service had started designating critical habitat to be used in the recovery plan, but the plan wasn’t to be finalized until January 2018. Then, in October 2017, the agency released its Species Status Review, which was then used as part of a 5-year review of lynx protection.

Just one month later, the agency concluded lynx didn’t need protection so it should be delisted. This, in spite of evidence that lynx and their habitat are threatened by climate change, wildfires, logging, development, motorized recreation and trapping, all of which disturb and fragment the landscape.

In his 2014 ruling, Molloy said the agency didn’t have to complete a recovery plan if “it finds and documents that such a plan will not promote the conservation of the lynx.”

On Dec. 11, 2017, the U.S. Fish and Wildlife Service took that cue and issued a decision saying it had determined a recovery plan wouldn’t promote the conservation of lynx. It moved forward with carrying out a delisting.

In December 2020, after Joe Biden won the presidential race on Nov. 3, the conservation groups sued the U.S. Fish and Wildlife Service, challenging the claim that a recovery plan wouldn’t help lynx. Now, almost a year later, new U.S. Fish and Wildlife leadership has settled the case, agreeing once again to develop a plan.

“Lynx require the protections of the Endangered Species Act because threats from massive logging projects and climate change are degrading and fragmenting their habitat,” said Arlene Montgomery, program director for Friends of the Wild Swan. “They deserve a recovery plan that contains measurable criteria to address those threats and make sure that their populations increase, not decline to extinction.”