Regulations around the placement and sale of recreational marijuana cleared the Consolidated Planning Board this week, and included a last-minute amendment regulating the amount of watts a grow operation can use based upon square feet.

Approval by the Planning Board sends the zoning regulations to the Missoula City Council for final approval. The additional regulation limiting a grow operation to 36 watts per square foot was intended to send a message about the importance of addressing climate change when opportunities to do so arise.

“We’re setting a standard for the City Council to work with,” said board member Dave Loomis. “They’re the decision-making body.”

The zoning regulations are intended to prevent the clustering of marijuana dispensaries and limit the amount of screening they place on their storefront windows. They also limit manufacturers and growers to certain districts based upon the size of the business.

Those regulations sailed through the Planning Board without controversy. However, the addition that regulates a grow operation to 36 watts per square foot didn’t receive a unanimous vote.

Neva Hassanein pushed to amend the ordinance to include language stating that “lighting power density shall not exceed 36 watts per square foot.” In effect, she said, it will require marijuana growers to use LED lights in place of other energy-intensive lighting.

The 36-watt allowance was still generous, she said.

“Global climate meetings are happening right now. We don’t have time to dink around,” said Hassanein. “We have to mandate some energy conservation measures, some renewable energy as part of this. I can’t in good conscious vote for this without it in it.”

While city staff acknowledged that the impacts of climate change represented a significant threat to the health, safety and welfare of the general public, they sought instead to nudge marijuana growers toward LED lighting and other efficiencies.

Planning staff suggested it was important to put the right regulation in the right place to achieve the greatest outcome. They also said they were working to adopt a more comprehensive plan covering all energy-intensive businesses, not just one or two industries.

“If we put it into business licensing, we can get them to take measures during license renewal,” said planner Cassie Tripard. “If we put it in this ordinance, we would only through zoning be able to regulate energy for new businesses, and we can’t go back and make existing business start to come into compliance with our energy goals.” 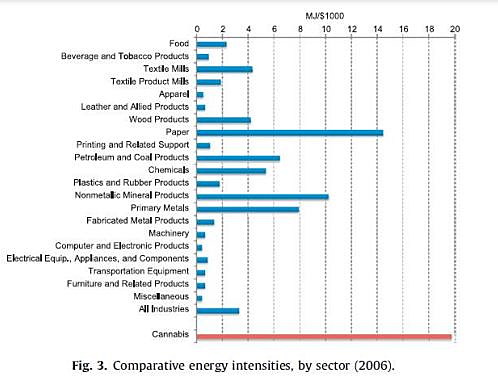 Leigh Ratterman, the city’s climate action specialist, said that since 2014, electricity use among Missoula’s commercial and industrial sectors has increased by 21% while natural gas usage has increased 28%.

At the same time, the total number of jobs within those industries have increased just 6.8%.

“It tells us that within the commercial and industrial sector we’re seeing more energy use since 2014, without a huge increase in businesses or job growth,” Ratterman said. “We’re just seeing more use, which is something we’re committed to working with our businesses to reduce.”

But marijuana growers represent one of the largest energy consumers when compared to most other industries. They consume 10 times the amount of energy per square foot as a typical office building in the Southwest, according to the city.

In a report to the Planning Board, city staff wrote that “With the legalization of recreational cannabis in the State of Montana, the City of Missoula can expect to see a significant increase in marijuana businesses and cultivators. The likely increase in cultivation within the city will result in a significant increase in energy demand, which is directly correlated to greenhouse gas emissions and associated changes in our climate.”

Board member Tung Pham agreed that climate change was a threat, but disagreed with regulations targeting one specific industry. He said the last-minute amendment could present challenges down the road, and he wanted to give the city time to create a plan addressing all energy-intensive businesses.

“I don’t think we need to rush to come up with a cannabis-specific energy policy. I had these same concerns when we discussed cryptocurrency mining operations,” Pham said. “That one is incredibly narrow. It targets a very specific usage and I hope we can do something better than narrow rules around cannabis and crypto mining, which singles out two specific industries.”

Those in favor of the measure, however, said recreational sales and cultivation are set to begin in less than two months, and there wasn’t time to waste waiting for the city to adopt wider conservation measures.