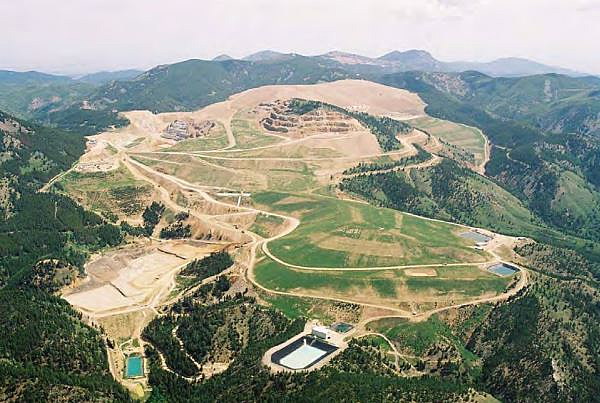 The Montana Department of Environmental Quality will take public comment on possibly restarting mining at the Zortman Landusky site next week.

A small exploration project on private land near the former gold mining site has been outlined by property owner Luke Ployhar. It is not a permit that would restart large-scale mining operations, rather it would last just 10 days and remove rock to test for minerals. The open public meeting comment period will last through Jan. 11.

The DEQ staff has determined the overall exploration project will have little impact on the current environment.

However, environmental groups and the president of the Fort Belknap Indian Community are speaking out against the proposal.

The former gold mining site has been idle for more than 20 years after the mining company that owned it went bankrupt, leaving a toxic site that would take millions of dollars to clean.

Ployhar is proposing to excavate one trench, approximately 25 feet long by 10 feet wide by 25 feet deep, to extract a bulk sample of ore, approximately 125 tons, for metallurgic testing. After that, according to the DEQ overview, he would backfill with overburden and waste rock, when the rock is extracted. The trench would be backfilled and graded to match the existing topography.

The proposed permitting documents said that no blasting would be needed.

Ployhar’s project said the excavation will take place during the course of a 10-day process, lasting during the daylight hours, 8 a.m. to 6 p.m. The excavation site is located approximately two miles Northwest of Zortman.

“The severity, duration, geographic extent and frequency of the occurrence of the impacts associated with the proposed exploration would be limited,” said Whitney Bausch, environmental science specialist with the DEQ who wrote the environmental assessment.

Reclamation of any part of the site would have to be completed within two years.

“DEQ does not believe that the proposed exploration activities by (Ployhar) have any growth-inducing or growth-inhibiting aspects or conflicts with any local, state or federal laws, requirements or formal plans,” said Bausch.

The decision to open discussions about mining at a site may include discussion of acid mine drainage, which is water that has been polluted by the minerals exposed by the mining process. Pollution occurs when that water seeps from the site and flows into water sources.

The decision to possibly restart mining has rankled environmental advocates and the Fort Belknap Indian Community, which is located just several miles from the site. Previously, the Bureau of Land Management had placed a moratorium on any mining activity, but the federal government let paperwork lapse, allowing Ployhar to submit the paperwork.

“The Montana Department of Environmental Quality proposes to authorize an exploration project and not actual mining, but it is likely that a full-blown mining proposal will follow should testing of the ore body suggest there is a profit to be made from more mining in the Zortman and Landusky area,” said Fort Belknap President Jeffrey Striffarm. “Acid mine drainage has despoiled the land, water, and sacred sites of the Fort Belknap Indian Community. The Community Council’s desire to continue protecting our land and water against further devastation from mining development in our beautiful ancestral homelands in the Little Rocky Mountains is what led to the community’s decision to oppose the exploratory mining proposal.”

Attorney Derf Johnson with the Montana Environmental Information Center called the assessment inadequate and said that it makes assumptions that may be scientifically unsound, and also fails to consider whether an archaeological assessment is also needed.

“We are alarmed that the DEQ is continuing to ignore our concerns,” Johnson said. “This is is just shocking that they’re considering mining on this incredibly managed and sensitive area.”

For more than 20 years, the former Zortman Landusky site has been the location of extensive an extensive environmental cleanup that officials have previously said will last forever to curtail acid mine drainage, toxic water that seeps from the site and is a hazard to wildlife and humans.

Johnson said that the DEQ has determined that exposed minerals and rocks have been oxidized, lessening the chances of acid mine drainage. However, he said the department doesn’t have the science to back that claim.

“Have they done the science to prove that’s true? What potential risks are they assuring us of at a site that has been declared a mini-Superfund site?” Johnson said. “If that’s the assumption, they need to do a full assessment, which would include geochemical testing.”

He said the MEIC is advocating that the DEQ deny the permits because the risk of harming the land again, undoing the massive clean-up that has run into the tens of millions of dollars is too great, and there’s questions about any archaeological surveys, too.

He believes the department has the authority and responsibility under the state’s constitution to deny the permit.

“There’s such a long torrid history at this site that the risks are just too great,” Johnson said.