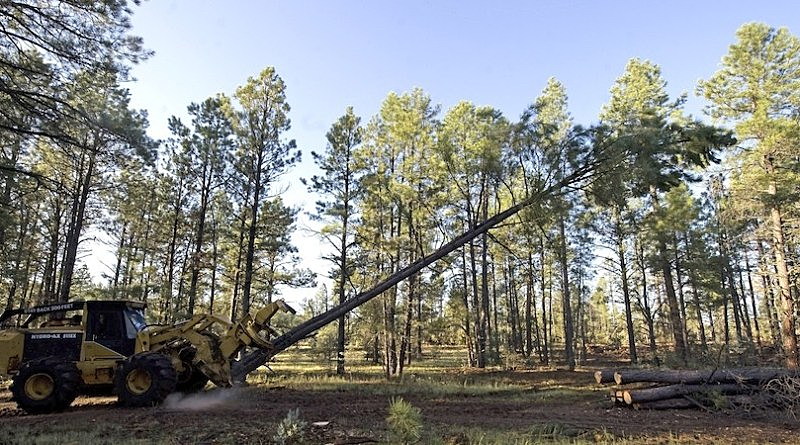 A lawsuit challenging a logging project near Libby is gaining some stiff opposition.

Two weeks ago, the American Forest Resource Council, the Kootenai Forest Stakeholders Coalition and Lincoln County requested to be allowed to intervene on behalf of the Kootenai National Forest and the U.S. Forest Service in a lawsuit challenging the proposed Ripley Project southeast of Libby.

The interveners said they are relying on the project’s timber for their economy, and a few members of the resource council and coalition have already bought the timber sales. Meanwhile, many Lincoln County residents were counting on the logging jobs, while others worry about wildfire near their homes. Finally, the groups said they need to have their say because the Forest Service doesn’t share the economic incentive or wildfire worries of the locals.

On Nov. 22, Missoula federal magistrate judge Kathleen DeSoto granted their request, saying they met the legal requirements for interveners: They made the request in a timely manner; they have a “significantly protectable” interest and could be negatively affected by the outcome; and the main party – in this case, the Forest Service – wouldn’t adequately represent their interest.

The American Forest Resource Council is a Portland, Ore.,-based regional trade association that advocates for logging projects on Western public lands, weighing in on federal and state laws and decisions regarding forest lands. The Kootenai Forest Stakeholders Coalition is a northwest Montana coalition of recreationalists, business owners, timber operators and conservationists.

“AFRC is pleased to join our county and collaborative partners in defending this very important project to protect Libby and other nearby communities as well as to promote forest resilience on the Kootenai National Forest,” said AFRC General Counsel Sara Ghafouri in a release. “Action is needed because Lincoln County has the most acres at risk from catastrophic wildfire events than any other county in the state and ranks the highest for the percentages of structures that are at very high or extreme risk from wildfire.”

Stimson Lumber Company also bought one of the timber sales but chose not to intervene, said Stimson procurement manager David Brummer. However, Stimson will file a formal declaration on behalf of the project.

Approved in May, the Ripley Project created four timber sales to commercially log almost 17 square miles, 30% of which would be clearcuts, near the Cabinet Mountain Wilderness. To move the logs, the Kootenai National Forest would build 13 miles of permanent road and 6 miles of temporary road while maintaining almost 100 miles of existing road over the course of 25 years. The Forest Service estimates the project would require $643,000 in taxpayer dollars even with the timber sales.

The Alliance for the Wild Rockies sued in September to stop the project, saying the logging and associated road building could negatively affect grizzly bears moving into the nearby Cabinet-Yaak grizzly bear recovery zone.

Some Lincoln County officials object to the characterization of the area as grizzly habitat, because a 1.5- to 2-mile-wide corridor between the Cabinet Yaak recovery zone and the Ripley Project already contains thousands of residents, the Libby Airport, a shooting range and is divided by a state highway. The American Forest Resource Council said 40% of the project is in the wildland-urban interface. The Resource Council added that managing it for grizzly habitat could have the unintended effect of increasing human and grizzly bear interaction.

“I just think on this particular one, this is just ridiculous saying this is grizzly bear country. We just need to stand up on this one,” said Mark Peck, Lincoln County Port Authority board member and former county commissioner.

The Alliance for the Wild Rockies argues the Ripley project area should be less exploited because it provides stopover habitat and migration routes for grizzly bears traveling between the Northern Continental Divide and the Cabinet Mountains.

A 2015 U.S. Geological Survey study determined that the Cabinet-Yaak area is too small to provide enough home range for a healthy population of grizzly bears and the lands immediately surrounding the area have such high road densities that grizzly bears are at risk. The study also found the Cabinet population was “highly inbred” because the population is so small and isolated, and concluded that “increased connectivity and gene flow with other populations” was needed.

The Kootenai National Forest has indicated it wouldn’t start road building until May 30 so DeSoto has requested all documents be submitted by the end of March.