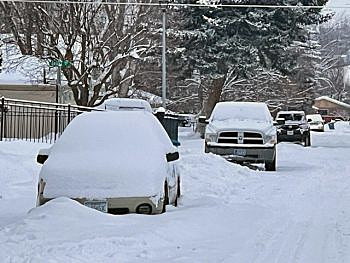 The state’s snowpack doesn’t look bad yet, but February needs to bring more precipitation than January did.

As of Feb. 1, Natural Resources Conservation Service measurements indicate that snowpack moisture in the mountains of western Montana is hovering close to the 30-year average, thanks to a series of January storms that helped bolster the mostly below-average snowpack measured on the New Year. But east of the Continental Divide is a bit drier.

Some regions, such as the Beaverhead and the Big Hole river basins, are around 93% of normal snowpack and the upper Clark Fork has only 86%. However, farther north and west, the lower Clark Fork and Kootenai basins have about 104% of normal. Worst off is the Shields River basin north of Livingston, which has only about half of its normal snowpack moisture.

This was predicted to be another La Niña year, which has typically been associated with below-normal temperatures and slightly above-normal precipitation in Montana, which together have the potential to benefit snowpack. But that didn’t bear out last year, and this year is questionable.

While the mountain snowpack is doing okay, the precipitation has yet to show up in the state. Most areas of Montana received precipitation amounts that were well below average for January, particularly in the northeast.

The regions between Sidney and Wolf Point and north of Havre and Fort Belknap received only a quarter of their monthly precipitation. Only the Blackfeet Indian Reservation and the valleys of southwest Montana saw above average precipitation. Still, the Missoula Valley’s 1.34 inches of precipitation was only a third of an inch above normal, according to the National Oceanic and Atmospheric Administration.

The average January temperatures were basically normal for about half of the state, unlike December when most of the south and west was several degrees above average. During January, regions in the southwest and north-central part of the state were still a couple degrees above average, including the Bitterroot, Sapphire and Pioneer ranges, although nearby valleys were a couple degrees below normal due to inversions caused by prevalent high pressure systems.

As a result, winter has done little so far to relieve Montana’s drought. As of Jan. 25, 85% of the state is still in severe drought or worse, much as it was at the end of December, with the plains of the Rocky Mountain Front east as far as the Upper Missouri Breaks National Monument in exceptional drought. Only the region from the Flathead Indian Reservation north is out of the drought. For now.

So there’s a chance next month’s snowpack will still be holding on, but so too might the drought. The state’s soil moisture is still very low from last summer. As a result, the NOAA Drought Outlook shows little change for the state over the next month.