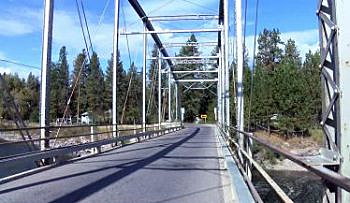 After years of debate, studies and public input, Missoula County on Thursday evening recommended that the historic Maclay Bridge be removed as part of future plans for a Bitterroot River crossing on South Avenue.

None of the decisions facing commissioners were simple, though in the end they opted for removal, saying it made the most sense given costs, safety and the ongoing environmental impacts of leaving the old bridge in place.

Removing the bridge would lessen by one foot the risk of upriver flooding, experts told commissioners.

“We’ve heard from Montana Fish, Wildlife & Parks, our floodplain administrator and the Clark Fork Coalition as far as the hydrological impacts,” said Commissioner Dave Strohmaier. “The consensus was pretty clear that if one new bridge was to go in, namely the South Avenue bridge, for the sake of mitigating hydrological impacts the Maclay Bridge should be removed,”

The county was presented with a suite of options, each carrying a range of costs. The cheapest among them was to do nothing – an option that would preserve the historic Maclay structure. But it would also leave the county liable given the bridge’s age, upriver flooding and ongoing river scour.

A second option would see the county lift the bridge so it stands above the 100-year floodplain and rehabilitate the structure. Doing so would cost around $3.6 million and require ongoing maintenance and inspection costs.

While that option would keep a historic resource and reduce the risk of a washout, the piers supporting the bridge would remain misaligned and leave the river susceptible to additional scour.

The final option would see the bridge removed at a cost of around $350,000. It was the option recommended by county staff and other experts – and ultimately chosen by commissioners.

“All those criteria – liability, cost, what’s going to happen to the river with flooding – just looking at that matrix, if the South Avenue bridge is built, the best thing for the river is to have the Maclay Bridge go,” said Commissioner Josh Slotnick.

Both sides offered varying views and focused on certain aspects of each option. Some wanted the bridge left in place for nostalgic reasons while other argued it was worthy of rehabilitation and continued use, despite the cost.

Bob Gentry, an attorney representing the Maclay Bridge Alliance, suggested a recommendation by the county would represent a predetermined outcome of the National Environmental Policy Act. As such, he suggested, it could lead to a lawsuit.

“Stating your preference for the Maclay Bridge today is premature,” he said. “It does in fact presuppose an outcome that a new bridge will be built at the western terminus of South Avenue. As such, it constitutes a predetermined outcome of the NEPA process.”

County officials disagreed, saying their decision didn’t hinge on NEPA but rather was intended to offer a preferred recommendation to the Montana Department of Transportation on which route it should consider as it moves forward with its own process of review.

Others seeking the bridge’s removal noted that a modern bridge would never have been placed at that location on the river given today’s values over impacts and other environmental concerns. The costs of removing the bridge and restoring the riverbank could be included in the project costs and funded by the federal Off System Federal Bridge Program.

If the county chose one of the other options, they noted, local taxpayers would foot the bill.

“The matrix with the summary of options addressing the river hydraulics, floodplain and costs presents you with a clear choice,” said former county commissioner Jean Curtiss. “The bridge needs to be removed and the riverbank restored as part of the South Avenue bridge project. This will allow the river to flow naturally by removing those bridge piers, removing issues of pier scour and flooding by having debris collect on the piers.”

Others suggested the Maclay Bridge Alliance was opposed to the South Avenue project – hence their fight to see the old bridge left intact. County officials with Public Works acknowledged that a growing population and changes to the transportation network always left some satisfied and others displeased.

“You always run into situations where roads change. Those who live on those roads aren’t always happy with the outcomes,” said Shane Stack, director of Public Works. “At the end of the day, we have to look at the county as a whole. We have to look at these things more on a global perspective.”