The residents of Missoula combine for more than 1.8 million vehicle miles each day, accounting for nearly 84% of all the greenhouse gas emissions released annually by the city’s transportation sector, outpacing both the airport and railroad combined.

That’s according to the findings of the latest community Greenhouse Gas Inventory using 2019 as the baseline to measure where Missoula is in doing its part to reduce its carbon footprint and push back against climate change.

“This is a snapshot of what we’re emitting as a community,” said Leigh Ratterman. “The spoiler is that we’re pretty average for communities that have climate action goals.”

The data was collected across the Missoula urban area, which in 2019 had a population of 92,600 people. Together, those living and working within the boundary emitted 1.1 million tons of carbon dioxide, or roughly 12.1 tons per person.

Broken down by sector, around 36% of all emissions within the study area came from the commercial and industrial sectors, with around 70% of that stemming from electricity use and 30% from natural gas.

Add it up and Missoula’s transportation sector alone equates to 2,100 railroad cars worth of coal burned.

“We’re talking about transportation of vehicles and buses,” said Ratterman. “We’re focusing our efforts on sustainable transportation and electric vehicles, those types of things that can drive down our tailpipe emissions.” 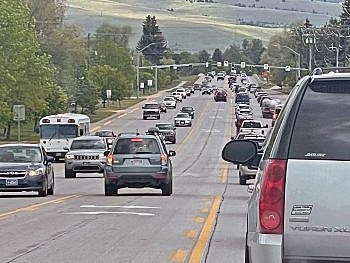 Residential energy use also contributed 23% of all emissions within the study area, or more than 263,000 metric tons of carbon. Of that energy, around 50.4% came from electrical use and 49.5% from natural gas.

But this year, Ratterman said, the study also looked at sequestration and found that the city’s 82 acres of urban forest pulled around 1% of the city’s total carbon emissions from the air. That basically eliminates the carbon released by the city’s water and wastewater operations.

Ratterman was hired as the city’s new climate action specialist last year, representing one of many efforts the city is taking to reduce its carbon footprint, not just for municipal operations but for the community as a whole.

Now on the job, she looks to implement the city’s various goals and policies to begin helping Missoula reduce its carbon footprint.

“We’re really focused on implementing and driving down emissions so we can have positive reports year after year,” said Ratterman.

The city and county have adopted a number of goals aimed at carbon reduction, including 100% clean electricity by 2030 and zero waste by 2035. Mountain line has ramped up its fleet of electric busses and the city is planning an eventual shift to electric vehicles and more electric charging stations.

While the clean electricity goals may be ambitious, Ratterman said they can be achieved if the city’s effort to develop a green tariff with NorthWestern Energy bares fruit. Bozeman and Helena are also part of that effort.

“We don’t quite know what the outcome is going to be. We’re working with NorthWestern to develop a green power product where businesses, residents and municipalities can buy into renewable energy to source clean electricity. If that is adopted, the city will meet its 100% clean electricity goal. If not, we’ll have to pivot and look at other solutions we can explore.”

With solid waste accounting for a portion of the carbon emissions, the city currently employs a state-authorized program that provides tax increment to deconstruct buildings during redevelopment. Deconstruction costs builders more time and money – as well as the end user – but offsetting those costs can help Missoula move closer to its carbon goals.

“The construction and demolition is the largest contributor of solid waste to our landfill,” said council member Stacie Anderson. “Tax increment is a way we as a community can put funds toward a larger community goal that lowers the waste that goes to the landfill.”

Ratterman said a consultant hired by the city is also doing an audit of municipal buildings and will make recommendations on capital projects that could lower emissions. The city will also begin using climate as a lens through which it views most projects.

“There really is a big group looking at what this climate lens looks like,” said council member Amber Sherrill. “When projects come to us, they’re going to have been looked at through a climate lens. It’s going to be invaluable, not only for us but for the department heads to be considering that.”