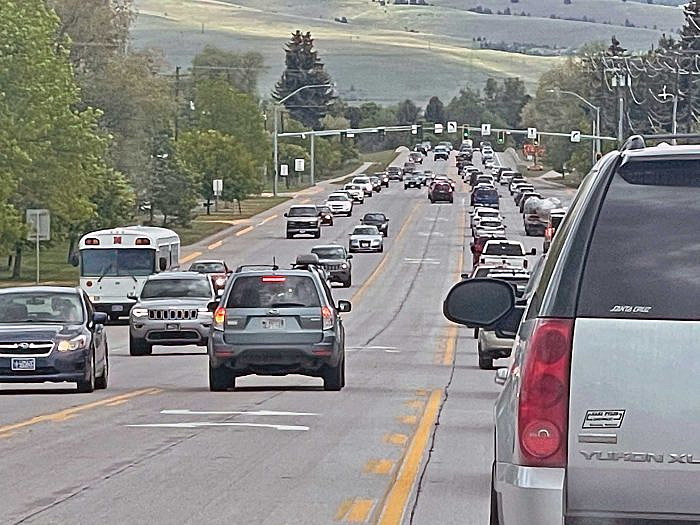 Two weeks after the City of Missoula released its newest greenhouse gas inventory, members of the public are urging council members to take note of the city’s carbon footprint and develop tools to reduce it.

The City Council last summer adopted an equity resolution and directed a working group to develop a lens though which decisions would be made with the city’s equity goals in mind. A similar effort to address carbon emissions through a climate lens is also in the works.

But some members of the public are growing impatient.

“I haven’t heard it applied yet at any of these meetings,” said resident Shamis Land on Monday night. “There needs to be a focus and flow into all the (city’s) projects.”

Last month, the city released its newest Greenhouse Gas Inventory, which found that those living and working within the city’s urban boundary emitted 1.1 million tons of carbon dioxide annually, or roughly 12.1 tons per person.

It also found that the residents of Missoula combine for more than 1.8 million vehicle miles each day, accounting for nearly 84% of all the greenhouse gas emissions released annually by the city’s transportation sector, outpacing both the airport and railroad combined.

While the trends won’t be reversed overnight, city officials said they are working to develop a climate lens through which future decisions will be made.

“We are getting closer to this, and I think it’s going to be a very important piece for this body’s decision making,” said council member Amber Sherrill, who is helping develop the policy. “It’s going to push policy around climate change, and we will have every single department looking at this and considering this in all sorts of different ways.”

Those efforts could run as deep as the products purchased by the city, Sherrill said.

“We’re talking down to where products might come from,” she said. “We need to balance the financial piece with that, but it’s going to be a complete game changer for how different projects and purchases are brought to this body in the future.”

The city and county have both adopted a number of goals aimed at carbon reduction, including 100% clean electricity by 2030 and zero waste by 2035. Mountain Line also has increased its fleet of electric busses, and the city is planning an eventual shift to electric vehicles and more electric charging stations.

While the clean electricity goals may be ambitious, Leigh Ratterman, the city’s climate action specialist, said they can be achieved if the city’s effort to develop a green tariff with NorthWestern Energy bares fruit. Bozeman and Helena are also part of that effort.

But some council members want to see change on a broader scale. Council member Daniel Carlino on Monday scolded the state’s congressional delegation for propping up the oil and gas industry in light of the Russian war on Ukraine.

“We’re hearing a lot from our politicians in Montana that think this is the time to drill, drill, drill,” Carlino said. “Both our Montana senators now are advocating for more drilling, fracking and more pipelines under our rivers in Montana. Shame on Sens. Daines and Tester for supporting oil and gas infrastructure in 2022 knowing the exact facts and science. I think that comes from their large contributions from the fossil fuel industry.”