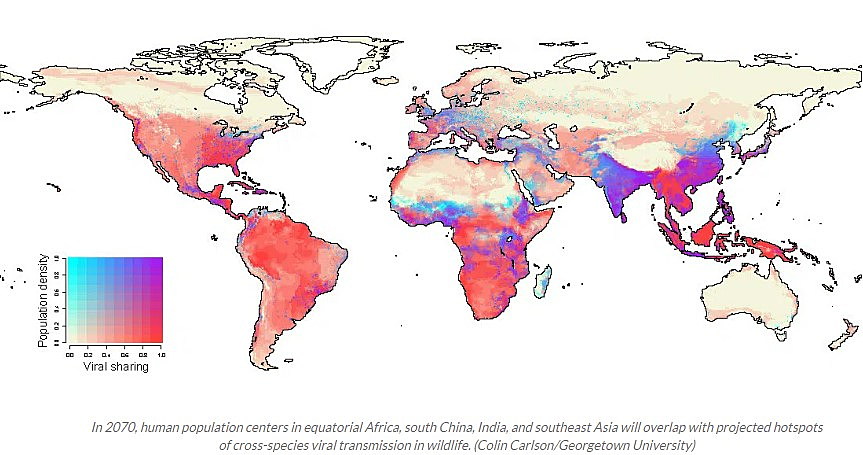 (CN) — Wild animals forced to relocate to areas where humans have settled due to a warming climate could dramatically increase the chances of another pandemic caused by a zoonotic disease, researchers said Thursday.

The study, published in Nature by Georgetown University researchers, includes the first comprehensive assessment of how climate change will restructure the global mammalian virome.

As wild animals shift their geographic range to follow their habitats into new areas, they’ll encounter other mammals for the first time — including humans — and are predicted to share thousands of viruses, according to the researchers.

Much of the process is already underway as the planet has warmed 1.2 degrees. Efforts to reduce greenhouse gas emissions may not stop the animal migration, the researchers warn.

The movement of animals into areas heavily populated by humans will create opportunities for viruses like Ebola or coronaviruses to emerge in new areas, making it easier for viruses to jump from animals to humans.

“The closest analogy is actually the risks we see in the wildlife trade,” the study’s lead author Colin Carlson, an assistant research professor at the Center for Global Health Science and Security at Georgetown University Medical Center, said in a statement.

He added: “We worry about markets because bringing unhealthy animals together in unnatural combinations creates opportunities for this stepwise process of emergence — like how SARS jumped from bats to civets, then civets to people. But markets aren’t special anymore; in a changing climate, that kind of process will be the reality in nature just about everywhere.”

Animal habitats are expected to move disproportionately in the same places as human settlements — into biodiverse, higher elevations — creating hotspots for viral spillover risk, according to the study.

Bats, which account for most novel viral sharing, will be able to travel long distances and share emerging viruses since they can fly.

“This mechanism adds yet another layer to how climate change will threaten human and animal health,” co-lead author Gregory Albery, noting, “It’s unclear exactly how these new viruses might affect the species involved, but it’s likely that many of them will translate to new conservation risks and fuel the emergence of novel outbreaks in humans.”

“When a Brazilian free-tailed bat makes it all the way to Appalachia, we should be invested in knowing what viruses are tagging along,” Carlson said.

He added: “Trying to spot these host jumps in real-time is the only way we’ll be able to prevent this process from leading to more spillovers and more pandemics.”

The study was funded by the U.S. National Science Foundation.