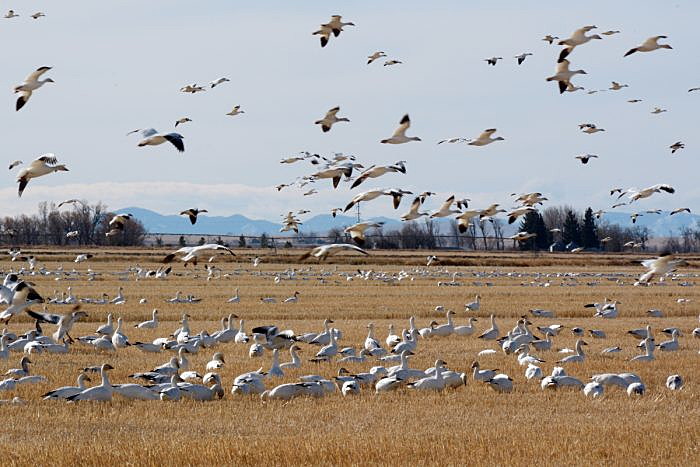 This year’s flare-up of avian flu has both livestock producers and wildlife managers worried so they’re hoping the public can help keep it from spreading.

In early April, the Montana Department of Livestock learned that some chickens south of Great Falls had contracted the Highly Pathogenic Avian Influenza. Shortly after that, two sick wild birds – a Canada goose near Belgrade and a snow goose on Canyon Ferry Reservoir – were found and also tested positive.

Knowing the avian flu has been working its way across the nation since December when it showed up in South Carolina, Montana livestock and wildlife experts grew concerned.

Highly Pathogenic Avian Influenza pops up every few years because it’s always in bird populations because some species can carry it without ill effects. The previous event was in 2015, which was one of the costliest animal health emergencies nationwide, said State veterinarian Marty Zaluski, partly because it was allowed to spread more and lasted about six months.

“In 2022, we have a larger number of states affected, but the total number of poultry so far is significantly less. But we’re not through it yet,” Zaluski said.

However, Montana Fish, Wildlife & Parks veterinarian Jennifer Ramsey said this outbreak appears to be having a worse effect on wild birds than the 2015 event. In addition to the snow goose on Canyon Ferry, a snow goose at Freezeout Lake west of Great Falls tested positive and many snow geese are dying, Ramsay said.

In 2015, almost 50 million domestic birds were affected in the U.S. over six months. So far this year, 31 million birds are affected in 29 states.

“That’s higher than we had in 2015. I think these numbers speak to the greater virulence or pathogenicity versus 2015,” Zaluski said.

Zaluski said the highly pathogenic flu can kill up to 90% of domestic poultry flocks. That’s why an outbreak can affect the trade status of the U.S. related to poultry products – other countries don’t want to risk spreading the disease.

Finally, there’s always a concern about effects on public health, although it’s not a high risk. Poultry producers don’t ship sick birds to processing plants, Zaluski said. Even if a sick bird got through, it can be safe to eat as long as people use safe cooking techniques and sanitation.

“We haven’t had any type of exposure detected in humans in Montana or the U.S.,” Cozart said. “However, we want to reduce any potential risk of it becoming a spillover event, which means we want to reduce human exposure as much as possible.”

So far, the Department of Livestock has tested nine domestic flocks and got four positive results while two are pending. Two were small backyard flocks while two were commercial endeavors. All the birds in those flocks have to be killed to prevent spreading the disease.

The domestic flocks have contracted the disease from wild birds, primarily waterfowl, that are on their spring migration through the state. However, chickens can also catch it from each other.

So to prevent further spread, the state has suspended all poultry shows for 60 days. After that time, the wild birds should have passed through, and the risk should be lower.

Zaluski recommends that poultry producers, including those who keep chickens in town, take precautions when dealing with their flocks, especially if they live near bodies of water. Use a separate set of clean clothes to handle the birds, use sanitation techniques and don’t visit other people’s poultry operations.

On the wildlife side, Ramsey said the flu affects mainly waterfowl and raptors that feed on the carcasses of diseased birds. She has submitted a red-tailed hawk and a wild turkey that have preliminary positive results. The turkey would be the first confirmed to have died of avian flu. She’s also submitted ducks and pelicans.

Ramsey has been receiving birds daily, but she cautions the public against collecting dead birds. If a bird is found, people are to contact FWP to send someone to collect it.

Also bird hunters should use caution and wear gloves when field-dressing and skinning wild turkeys or other birds.

FWP is also asking people to put bird feeders away to prevent birds from congregating. Ramsey said smaller birds that frequent feeders, such as chickadees, starlings, grackles and blackbirds, are rarely affected by the avian flu. Even so, to prevent exposure, it’s wise to take feeders down, especially since more food is available elsewhere now.