People are harder to manage than bears, but if more Missoulians would make just a few changes, coexistence with bears could improve, advocates contend.

On Wednesday evening at the Zootown Arts & Community Center, Missoula for Bears, a wildlife advocacy group, sponsored a free screening of the documentary “Bears of Durango” and panel discussion of what communities, especially Missoula, can do to reduce conflicts with bears.

Event co-organizer Brett Haverstick said the event and founding of Missoula for Bears was prompted by concerns over the fate of the grizzly sow and cubs that have frequented Missoula’s North Hills.

“Just like Durango, Missoula is growing, so it’s more important than ever to get this in place now,” Haverstick said. “We need to engage the university. We really need to be Griz Nation.”

“Bears of Durango” is a 2018 International Wildlife Film Festival award-winning documentary about a Colorado research project on the behavior of black bears and residents in Durango between 2011 and 2016. Residents had assumed that bear conflict was increasing due to more bears, but biologist Heather Johnson showed the bear population was fairly stable.

It was the human population that was causing the problem by expanding into bear habitat and bringing with it all its bear attractants – garbage, bird seed and pet food. Even within Durango, unsecured garbage bins could be too great a temptation if bears’ natural food was less available. 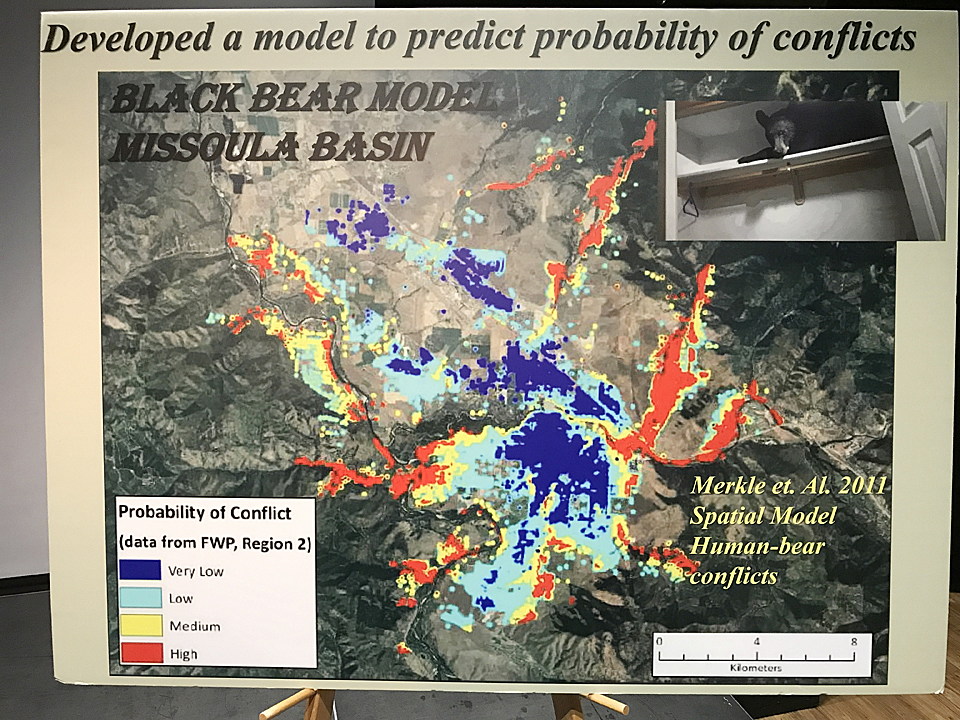 Panelist Jamie Jonkel, Fish, Wildlife & Parks bear biologist, said Missoula has basically the same conflict situation as Durango with the exception of a few different food sources like apples. People continue to build in the drainages surrounding Montana where University of Montana biologist Jerod Merkle showed the risk of bear conflict was the greatest. The Rattlesnake Creek drainage is a prime example of where houses dominate but bears congregate.

“Every single one of these drainages has 20 or more black bears. So there are a lot of bears in and around this area,” Jonkel said.

Because it’s May, bears are out looking for food after hibernation, so conflict tends to increase. Reports of about four or five black bears getting into garbage or chicken coops have popped up in each Missoula drainage.

Jonkel said he hadn’t gotten any recent reports of the North Hills grizzly sow and her cubs. But about four weeks ago, a lone grizzly came off Waterworks Hill, ambled through the Rattlesnake and climbed up onto Mount Jumbo.

If bears get into too much trouble, biologists or wardens might have to kill them. That upsets some people, but people don’t understand how they contribute to the problem.

In the past, Missoula has tried to pass ordinances and create bear-smart areas that require bear-resistant containers. But people still leave garbage and pet food out and don’t reinforce urban chicken coops.

Servheen, Jonkel and a few others recently created a Missoula Bear Smart Working Group to develop a more effective program for Missoula. Researched other community bear-smart initiatives, they’ve have modeled Missoula’s program on one developed in southern British Columbia.

Similar to the process for identifying wildfire risk, they’ve started with a hazard assessment to identify what and where the problems are and what decisions need to be made, which should be published in two to three weeks. The next step will be developing a bear-human conflict management plan that will have solutions like phased-in use of bear-proof containers.

Servheen said the working group got an enthusiastic response when they presented an overview of the process to the mayor, some city council members and the county commission a few couple ago.

“This is not the city making people do this. It’s not a bunch of bear people making people do this. Everybody has to be part of the solution,” Servheen said. “Everybody has to realize, like the folks in the film, that this is a real issue. What you can do is be involved and that’s what we’re trying to do: create ownership in this among everybody in town and a bunch of solutions that we can move forward with.”

Three Missoula City Council members were in attendance. Councilwoman Kristen Jordan asked why people tended to be resistant to securing their garbage or getting bear-resistant bins.

“Most people are very supportive. But there are some private-righters out there – those are going to be tough. And there are some folks who won’t spend an extra $5 a month, and there’s no way you’re going to make them do it,” Jonkel said.

The documentary showed that bear conflict in Durango dropped significantly if at least 70% of homeowners used bear-resistant bins properly. If the bins were secured with a gravity latch rather than two ring clips, compliance jumped to 90% from 40%, said documentarian Dusty Hulet.

Other cities in Montana, such as Whitefish and Red Lodge, have already created bear-smart programs, using taxes to fund bear-proof containers. Last month in Jackson Hole, Wyo., the Teton County Commission voted to make bear-proof containers mandatory county-wide. So some are surprised that Missoula, home of the University of Montana Grizzlies, is lagging behind.

Panelist Michele Dieterich of Friends of the Bitterroot, who served on the 2019 Governor’s Grizzly Bear Advisory Council, said some people are always resistant to change so it was good to hear that the Missoula County Commission supported becoming more bear-smart. Ravalli County does not, even though it’s right next to the Bitterroot Grizzly Bear Recovery Zone.

“They’re saying ‘we don’t have a problem; grizzlies aren’t here yet.’ What we’re trying to do is bring bear awareness to the forefront. We also want to be a community that’s bear smart,” Dieterich said. “All eyes are on you, Missoula. We’d like to see the change here so that we can use that momentum to move south to Ravalli County.”