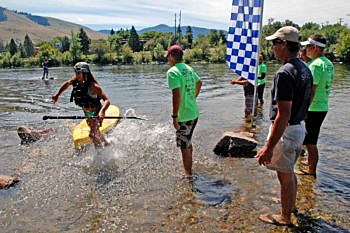 With summer in the air, ambassadors with an eye out for litterbugs and bad behavior on the Clark Fork River will return for another season, along with shuttle services aimed at alleviating parking and traffic congestion.

Missoula County last week approved an agreement with the city, Montana Fish, Wildlife & Parks and the Clark Fork Coalition as they team up for the summer hatch of recreators and split the related costs of dealing with them.

“It was a successful effort trying to alleviate some of the river recreation issues that a lot of folks have been seeing, largely around the urban area in Missoula,” said county planner Chet Crowser. “Having this non-enforcement, boots-on-the-ground presence with this educational message was really necessary and we saw some huge benefit from all that.”

This year’s agreement looks to build on last year’s success and grows the Missoula Valley River Recreation Ambassador program. The program aims to address public safety and the bad behavior of some river users during the summer season.

Pressure on the Clark Fork River has grown in recent decades as the summer heat intensifies and the river becomes an easy afternoon getaway. Parking and traffic congestion have created safety concerns while human impacts have increased erosion, litter and drunken behavior.

Some also lack simple river ethics. The ambassador’s deal with it all.

“This will continue us through this upcoming season,” Crowser said. “We’ve been able to get more of a commitment from the city and their contribution financially from this, as well as FWP. In the future, we might be able to incorporate some of the funding the Forest Service has.”

Under this year’s agreement, the county will contribute $30,000 and the city $15,000 to support hiring the ambassador positions. Montana FWP will contribute $10,000 while the Clark Fork Coalition provides in-kind services by coordinating the effort.

“I’m excited to see that our partners from last year have stepped up their contribution” said Commissioner Josh Slotnick. “Nothing breeds engagement like success. Our partners want to be more deeply involved.”

Mountain Line and the the Associated Students of the University of Montana will also continue free shuttle service this year. That program began last season and was billed as successful.

“They do have plans this year to provide some of the transit options to river recreation,” Crowser said. “That’s been a cool partnership that started last year and will help alleviate issues of congestion and parking.”