Even with May’s cool weather, Missoulians have been getting outdoors, flocking to the usual offerings of nearby trails. From downtown, observers can see colorful specks intermittently dotting the trails as people climb Mount Jumbo, Mount Sentinel and Waterworks Hill. Those tromping the trails have been treated to their own colorful scenes as wildflowers have stippled the hillsides, brightened by the rains.

For those wishing to escape the madness of Missoula, however, it’s increasingly difficult to get away from all the people. Fortunately, starting this weekend, there will be a new public trail for those wishing to get above it all.

On Saturday, in association with National Trails Day, the Five Valleys Land Trust will officially open the House of Sky Trail and the Skyline Ridge Trailhead at the head of the West Fork Deer Creek drainage. That will also be the day that volunteers will help smooth and clean out the most recent trail construction and put up new signs to welcome the public.

“This is a project that has been in the works for about two years, and we’re really excited to be able to share it with the public,” says Five Valleys Associate Director Ben Horan. “This has really been a community effort, with strong partnership from the Mount Dean Stone Committee, trail building expertise from MTB Missoula, and essential support from Run Wild Missoula, onX Maps, and Montana Fish, Wildlife and Parks’ Recreational Trails Program.”

On Wednesday, Horan went up to the trailhead to see the final product a few days after the parking area and trail had been finished. The trailhead is about a 25 to 30 minute drive from town, past the Pattee Canyon Recreation Area and up the somewhat rough single-lane road to the top of the West Fork of Deer Creek. But already, one truck was parked there.

The House of Sky Trail is 4.6 miles, following the ridgeline west from the trailhead, up over Mitten Mountain to where it connects to the Mount Dean Stone Preserve Trail. The Preserve Trail then circles the summit of Mount Dean Stone before descending north along the High, Wide and Handsome Trail toward either the Sousa or Barmeyer trailheads.
MTB Missoula built the trail with the help of many volunteers. The project was funded by a $75,000 Montana Fish, Wildlife & Parks Recreational Trails Program grant in 2021, as well as contributions from the Missoula business community including OnX, Sapphire Physical Therapy, Zilla State and Endurance Physio.

Horan, who has trail-building experience, hiked easily, pointing out the design details of the new trail, including the banked switchbacks and relatively low climb gradient.

“The most iconic hike in Missoula is the ‘M.’ And it’s extremely difficult. A lot of the older trails around Missoula are just crazy steep. So we wanted to shoot for an average 8% grade. That drastically lowers the bar for participation,” Horan said. “The M trail is more like 25%. A lot of the trails in the Rattlesnake, they’re still 15, 20% for long stretches. So the flatter trails here are designed to be more accessible. And more sustainable because steeper trails have more erosion and require more maintenance.”

Within about 20 minutes, the trail topped out on the ridge, surrounded by tiny biscuitroot, sandwort and fleabane flowers where most of the trees dropped away. From there, the trail heads west up and over nearby Mitten Mountain along an old fire line that was cut to fight the 1977 Pattee Canyon Fire. 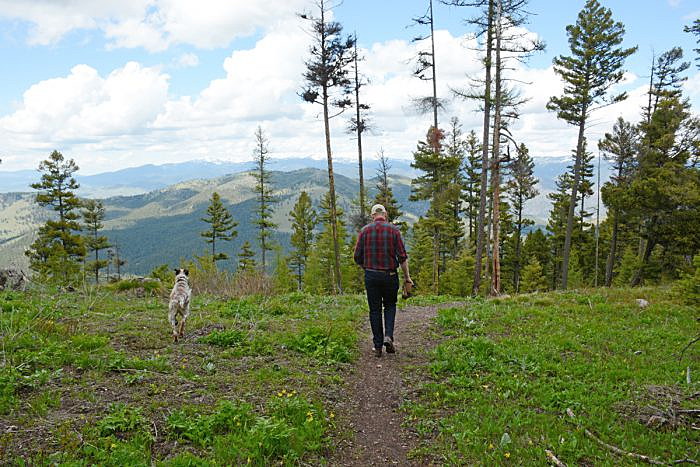 Standing at almost 5,800 feet elevation, slightly higher than University Mountain, Horan pulled out his binoculars and scanned the snow-covered peaks in all directions. To the south, he could see dark clouds topping Trapper Peak in the Bitterroot Range and parts of the Anaconda Range farther east; to the northwest, Ch-paa-qn steepled on the horizon; and to the northeast he could see over the Bonner mill site into the Swan Range and the Bob Marshall Wilderness.

“You drive so high. So it’s not that far to get up to the ridge. It’s just a few hundred (feet) vertical up to the top. It’s the easiest way I know of to be all the way up at the top,” Horan said. “Walking from the university to University Peak is a different feel.”

After a few moments watching the cumulus clouds float by – Horan joked they were “Simpsons” clouds because of the opening scene of “The Simpsons” television show – Horan headed back to the parking area, this time taking a leg of the trail that angles to the northeast, traveling a more tree-covered route that reconnects with the original trail near the parking area. The loop is about 3 miles and the trail is a bit wider than the rest of the ridge trail, because trail designers figured it would get more traffic than the longer route leading to Mount Dean Stone.

Along the way, a few signs are already up, telling visitors the trail is closed from Jan. 1 through May 15 to conserve the area for elk and other wildlife. But for the rest of the year, it’s a new public playground, thanks to the help of The Nature Conservancy and the Montana Department of Natural Resources and Conservation, which own the land the trail travels through.

Normally, every hiker would have to get a state recreation license to go on state trust land. But Horan said Five Valleys Land Trust has an agreement with the DNRC where the Five Valleys pays an annual fee for a public access land-use license to cover everyone and it will maintain the trail. For The Nature Conservancy land, the Conservancy has granted free use of the land in anticipation of Five Valleys eventually raising enough money to buy all 2,500 acres that TNC owns behind the ridge down to Miller Creek. Horan called it “a huge leap of faith and a show of trust.”

Run Wild Missoula recently pledged $100,000 to Five Valleys Land Trust to support the next steps on the Dean Stone landscape including finishing the construction of the House of Sky Trail.

While a running organization in charge of a marathon might seem like a logical but maybe unlikely supporter of public open space, Horan said the credit for the collaboration goes mostly to the late Tony Banovich former Run Wild Missoula executive director.

“This project was near and dear to his heart,” Horan said. “He’d been involved in the Mount Dean Stone conversation for several years and providing more places to get people outside, whether they’re running or going for a hike or just going for a walk.”

The next step for Five Valleys is considering options for possible trails that might lead from Mount Dean Stone down to Miller Creek. That’s still a long way off, but Horan said it’s a priority.

“It was really highlighted (during the pandemic) that getting outside for physical and mental wellness is more important that it’s ever been in my lifetime. Having friends and family living in Chicago and New York, I think their pandemic experience has been somewhat different,” Horan said. “And as the Missoula community looks to how we’re going to solve this affordable housing challenge, what we see is the community being asked to embrace higher density living. That really elevates the importance of community open space. If we’re going to live closer together, it’s even more important to have space to spread out.”

Hands-on volunteer work will start at 9 a.m. on Saturday at the Skyline Ridge trailhead. Volunteers will be hand-finishing trail, building fence, and completing other necessary work prior to opening the trail. Community members interested in volunteering for the workday can learn more and register by visiting fvlt.org.