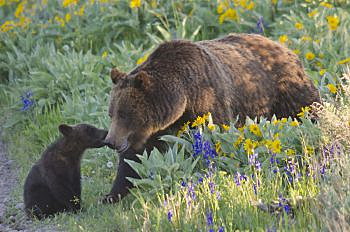 Two environmental groups are taking the U.S. Fish and Wildlife Service back to court over the Flathead National Forest’s reduced efforts to keep roads to a minimum in grizzly country.

On Tuesday, Earthjustice, on behalf of the Friends of the Wild Swan and the Swan View Coalition, sued the U.S. Fish and Wildlife Service in Missoula federal court, saying the agency failed to do what the court had previously told it to do: thoroughly evaluate how changes to road policies in the 2017 Flathead Forest Plan affected threatened grizzly bears and bull trout.

“The Fish and Wildlife Service attempted to paper over the deficiencies cited by the court, but the on-the-ground impacts to bull trout and grizzly bears from roads are real,” said Arlene Montgomery, Friends of the Wild Swan program director. “They eliminated the very standards that protected bull trout and grizzly bears and replaced them with a scheme that allows more roads to be built. More roads equals less security for griz and degraded habitat for bull trout.”

In 2017, the Flathead National Forest finalized its new forest management plan, a replacement of the previous version published in 1986. The new plan abandoned a previous Forest Service amendment, Amendment 19, which set limits for motorized use and road density within grizzly management units to ensure that most of the core area stayed secure, that is, free from roads.

The aim was to have at least 68% of each grizzly unit qualify as security core area. Amendment 19 also helped bull trout because fewer roads mean fewer stream culverts are crushed or blocked with debris.

Instead of Amendment 19, the new Forest Plan used the road density existing in 2011 as a limit. And the Forest Service was supposed to close a section of road for every new section added, the only requirement to consider a road “closed” is to block the first 50 to 300 feet of the road with rocks or logs to make it supposedly “impassable.”

So Friends of the Wild Swan, Swan View Coalition and two other organizations sued the Flathead National Forest and the Fish and Wildlife Service, saying the Forest Plan and the biological opinion violated the Endangered Species Act. In June 2021, Judge Donald Molloy ruled that the Flathead Plan was sound except for the analysis of how roads and road densities in the forest might impinge on grizzly bear survival.

Molloy even cited a 2004 Swan View Coalition survey on the Swan Ranger District, which found that roughly 68% of closed roads showed use because of ineffective closure methods. So he ordered the Fish and Wildlife Service to redo its Biological Opinion paying particular attention to the risks posed by roads.

Roads are bad for bears. Research has shown that extending roads into wild areas increases the chance of human-bear conflict, which often results in dead bears. Even the original Biological Opinion said “the presence of roads and associated human activities has detrimental impacts to grizzly bears.” Bears learn to avoid roads, so adding more roads can force bears out of even the best habitat. Thus, in “secure grizzly habitat,” the fewer the roads, the better.

But this February, the Fish and Wildlife Service returned with a biological opinion not much different from the first one. That’s what led to Tuesday’s lawsuit.

The plaintiffs once again argued that road density will actually increase beyond what existed in 2011 because new roads are being built – so far, 66 miles of new road is planned within three logging projects – while closed roads will remain mostly untouched.

“…‘impassable’ roads, as defined by the Revised Forest Plan, are no such thing,” the Earthjustice complaint said.

In its revised opinion, the Fish and Wildlife Service refused to consider the possibility that the unauthorized use of closed roads would increase, saying past levels of use hadn’t caused problems for the bear. Yet, since the start of the pandemic, the Flathead Valley has had one of the fastest growing human populations in Montana, and tourists continue to flood into the area for outdoor recreation.

“In short, FWS irrationally assumed that future adverse impacts to grizzly bears from ineffective road closures would mirror past impacts,” the lawsuit said.

The groups are asking the court to once again require the Fish and Wildlife Service to redo the Biological Opinion.