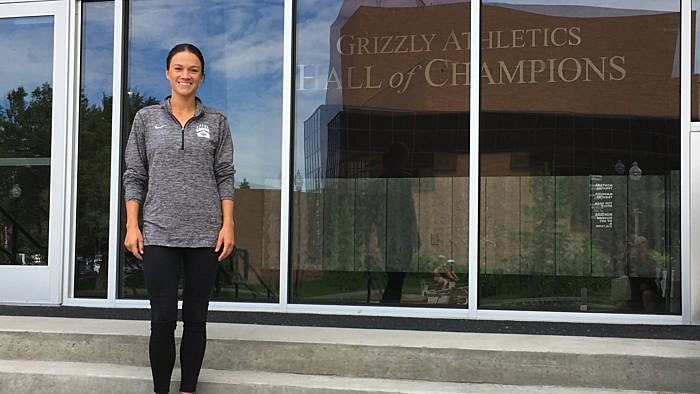 When Montana’s new assistant soccer coach was recruited to play at Cal, little did she know that one year ahead of her, at the same position, would be Alex Morgan, who would develop into one of the best players in the world.

Nor did she anticipate dealing with a series of injuries that would hold her back.

But then there was this: Given her chance as a senior, a fully healthy Katie Benz scored 10 goals in the season’s first eight matches, a torrid and record-setting pace. And, sadly, finally this: In match No. 10 that season, at Santa Clara, Benz suffered a career-ending broken leg.

Not even touching on the year she spent as a member of a band, her work at a leprosy hospital in India or the camping trailer she built by hand to use on a months-long road trip, Benz has experienced some things, and she plans on using all of them in her new position.

“You have the one percent, the Alex Morgans, but I think my story is more of the norm, and that’s my way of being able to connect with players a little bit better,” said Benz, who got her start in collegiate coaching last season as a volunteer at Denver.

“I understand that not everyone gets what they want right away and that it can be a difficult adjustment. I had injuries throughout my career and really had to adjust and work for what I wanted. That’s the more typical story, and I was better because of it. That’s the approach I take with coaching.”

Benz completes the staff of seventh-year coach Mark Plakorus, joining the program’s other assistant, Micaela Castain, who will be starting her second season at Montana in the fall. Benz replaces Vijay Dias, who left the program last winter to pursue new career opportunities.

Born in Halifax, Nova Scotia, but raised from the age of 2 in Sonoma in northern California wine country, Benz, a gifted singer, spent two years attending nearby Santa Rosa High so she could take part in the school’s renowned music program. She graduated in 2008 from Sonoma Valley High.

A high-scoring forward for the Dragons and member of the Santa Rosa Soccer Club’s State Cup-winning team in 2007, Benz had college choices, but Cal was Cal. High-level soccer in the Pac-12. High-level academics at one of the nation’s most prestigious public universities. No one else had a chance.

“Once I heard from Cal, that was my focus,” she said. “I was a good student, but I probably wasn’t a Cal-grade student. I wouldn’t have gotten into Berkeley without soccer.

“So if that offer was in front of me, why wouldn’t I take it? I think it was a great choice. Having a degree from Berkeley is huge.”

Benz scored her first collegiate goal as a freshman, helping the Golden Bears rally from a 2-0 deficit to earn a 2-2 draw with Arizona State. Two days later she added another, matching Morgan’s goal in a 2-0 win over Arizona.

She was limited to nine matches and just two shots in an injury-plagued sophomore season, then played in seven matches as a junior, getting three starts. Her lone goal came in an 8-1 rout of Hawaii.

It also took Benz that long to come to terms with what, exactly, she wanted to get out of her collegiate soccer experience.

“It wasn’t until my junior year that I asked myself, What would make me feel successful at the end of my time here?” she says. “What was my motivation? For me, it was to become captain. From that point on, that’s what I worked toward.”

It sounds simple. What does a player want? To lead the team in scoring? To make four trips to the NCAA tournament? To earn first-team all-league honors? To be voted a team captain?

That should be one of the starting points for a coach, learning what drives a player, but nobody ever asked, so Benz had to do her own self-searching.

“It took until my junior year to figure out what I wanted,” she says. “As a coach, I want to do what I can to help players begin that process the moment they step foot on campus. I want to help them figure out their own motivations, whatever those might be.”

Benz reached her goal. She was named captain as a senior.

She scored the game-winning overtime goal in Cal’s 2-1 win over San Diego State in the second match of the 2011 season. She would score nine more goals over the next six matches, two coming against North Dakota State, a hat trick in a win over Denver.

On Sept. 6 she was named the Pac-12 Player of the Week. Not long after that, with Cal sitting 8-1 and Benz ranked first in the Pac-12 in scoring, second in the nation, her season and career were over.

“I don’t know if I would have wanted to coach if I had continued and played out my career,” she says. “It had an open-ended finish to it, so maybe coaching is my way of closing it out.”

Benz graduated in 2012 with a degree in legal studies. She put it to use as a paralegal while coaching in Sonoma County and playing for the North Bay FC Wave of the Women’s Premier Soccer League, working partly to decide if law school was in her future. It wasn’t.

The next phase of her life story starts out like this, the type of tale everyone in their 20s should be able to tell: “A friend of a friend was starting a new band down in Texas…”

She quit her job, spent a month in India with her mom volunteering at a leprosy hospital and then moved with the four other members of The Youngest — every member of the band was the youngest child in their families — to a small ranch house in La Grange, Texas, and got to work.

After six months of collaboratively writing and recording, Feral Road, a collection of folk-rock Americana songs — she pushed for Wild Road but was outvoted — was finished. She and the rest of the band spent the rest of that year on the road, one car, one trailer, sleeping on the couches of friends.

“Two of the guys in the band were from Chicago, another one was from St. Louis, so most of our tour was in the Midwest. That’s where most of their friends were,” Benz says. “I found out I don’t need music in that capacity, so that kind of played its course.”

She wasn’t quite done with the road. She built a camper from a flatbed trailer, which she still owns, and went on a two-month road trip, only to end up in Denver, where she discovered soccer hadn’t quite left her system yet. The competitive fires still burned.

“I had a normal job at first, but coaching was something I continued to go back to. Finally I said, Okay, I’m going full-go,” she says. “I quit my 9-to-5 desk job and started with DU as a volunteer director of ops and coached for the Colorado Rush.”

She serendipitously worked Montana’s camp last summer, then watched her Pioneers lose at home last fall to the Grizzlies 1-0.

“Mark was looking for someone this spring, so it was a smooth transition,” says Benz. “I’m from a small town in California, so I wasn’t connecting to Denver as a city as much as I wanted to. Missoula is a lot more appealing. It reminds me a little bit of home.”

Working at Montana will be her first full-time college coaching position. She’s ready. And she hopes it is just the first step on a long journey that takes her to where she wants to end up: a Division I head coach.

“That’s my ultimate goal,” she says. “I think having a female on staff everywhere is necessary, but I also think there is a huge need for us to keep going forward and getting to the head coaching position. I don’t think you see that enough.”

With fewer than 330 Division I head coaching jobs, the odds are stacked against her. Of course she’s been in this position before. As a player she learned that she won’t get what she wants right away. She will face twists and turns, ups and downs. But one thing is certain: she’ll get her wild road after all.