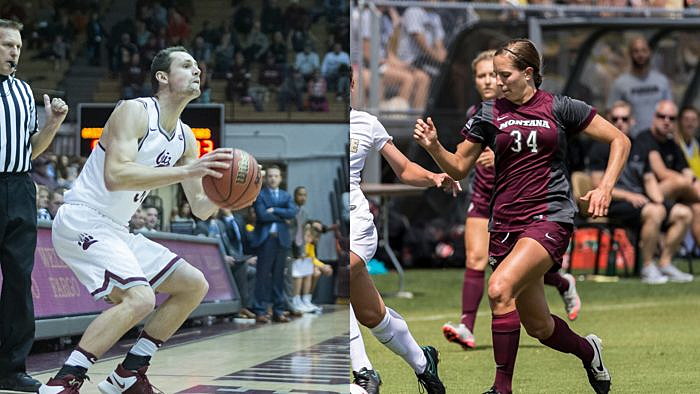 Tess Brenneman and Brandon Gfeller have been named Montana’s recipients of the Big Sky Conference Scholar-Athlete awards for 2016-17, the league office announced.

Brenneman, of Kalispell, was a five-year member of the Griz soccer team and graduated with a degree in health and human performance. Later this summer she will move to Ukraine and spend a year working in youth ministry.

Gfeller, from Colfax, Wash., was a four-year member of the men’s basketball team. The department’s Grizzly Cup winner in April, Gfeller graduated with a degree in accounting. He plans on attending graduate school.

To qualify for the annual Big Sky Scholar-Athlete award, student-athletes must have a GPA of 3.2 or better, must have competed at their school for at least two years and been a letter-winner, and must be a member of the graduating class or have completed their last year of eligibility.

Brenneman redshirted in 2012 and didn’t miss a match the next four years. She played in 81 matches, starting 77, including her final 69 as the Grizzlies won the 2014 Big Sky championship and three times advanced to the league tournament.

Brenneman earned second-team All-Big Sky Conference honors as a sophomore, when she played mainly outside back. The team’s defensive anchor at center back as a junior and senior, she was voted first-team All-Big Sky both seasons.

Gfeller, the first Griz men’s basketball player to win the award since Mathias Ward in 2013, was a four-time Academic All-Big Sky selection and one of the best 3-point shooters in program history.

He knocked down 83 triples as a sophomore, 72 more as a junior, including eight in a double-overtime road win at Northern Arizona to earn Big Sky Player of the Week honors. His 203 career 3-pointers were 15 shy of the school record of 218 set by Kevin Criswell.

Gfeller three times was voted the winner of the program’s Allan Nielsen Award, presented to the player who best represents Grizzly Basketball. He played in 215 games, getting 65 starts.