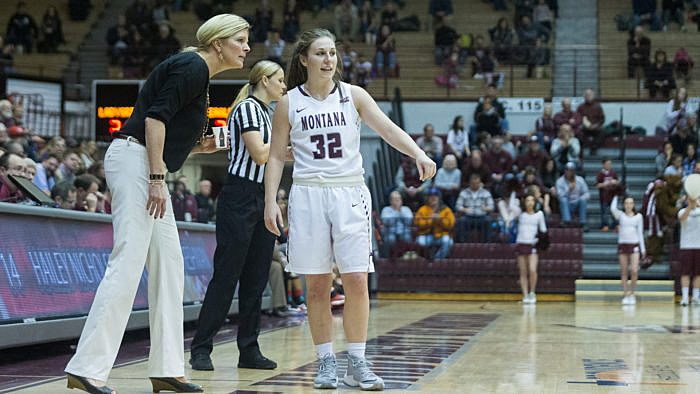 The first time Kentucky called, looking for a game to add to its November road trip to Washington State, Montana coach Shannon Schweyen wasn’t so sure. It was her first year, and the Lady Griz, shorthanded and inexperienced, were going 59 days between wins.

When the second call came, after the season had ended, things were different. Schweyen’s team had finally turned a corner late in the season, and the return of Kayleigh Valley and Alycia Sims from knee injuries had Schweyen feeling confident her team would be up for the challenge.

So she agreed. A date was set, the contract was signed. Kentucky will be playing at Montana on Thursday, Nov. 16, the marquee game on the Lady Griz’s 2017-18 schedule.

“It was an absolute no-brainer to get a team of that caliber to Missoula,” said Schweyen, whose team will open the season at Wyoming on Monday, Nov. 13, before facing the Wildcats in its home opener three days later.

“They’d lost a few games on their schedule, so they wanted to pick up another game on this swing, so it worked out great for us. It was a chance to open with a big name and create some early excitement, so it was a great opportunity.”

Kentucky highlights Montana’s nonconference schedule, and for good reason. The Wildcats have put together eight consecutive 20-win seasons and have been to eight straight NCAA Tournaments, but that’s hardly the only test that will come the Lady Griz’ way in November and December.

Of Montana’s 10 Division I nonconference opponents who dot the schedule before the Lady Griz open Big Sky Conference play on Dec. 28, seven played in postseason national tournaments last March, including four in the NCAA. Two of those teams had seeds of No. 5 or higher.

“I hope everyone is healthy and ready to go when the season starts, because we’re going to need them if we want to have a chance to make some noise,” said Schweyen.

“The schedule has created a spark in the girls as far as getting ready in the offseason. It should be a great way to get us ready for the conference season.”

Montana and Wyoming, which won 22 games last season and advanced to the WNIT, will meet on Nov. 13 in Laramie, the 14th straight year the region rivals have met.

The Lady Griz then will return home for a pair of games that should only add to the excitement surrounding the week of the Montana-Montana State football game. They will host Kentucky on Nov. 16, then renew a dormant series against Gonzaga, hosting the Bulldogs on Saturday, Nov. 18.

Kentucky won 22 games last season, Gonzaga 26. Both made the NCAA Tournament, the Wildcats as a No. 4 seed.

“Oftentimes with so much going on, people don’t really talk about basketball until later in the year,” said Schweyen. “One area we’re trying to focus on is creating some excitement right off the bat. This schedule certainly will do that.”

When Kentucky comes calling, it will be the first home game for Montana against a team from a Power 5 conference since the Lady Griz hosted Washington State in the WNIT in 2014.

It will be Montana’s first matchup against a team from the SEC since facing Georgia in Spokane at the 2013 NCAA Tournament, its first home game against a member of the SEC since Mississippi traveled to Missoula for the 2007 Lady Griz Classic.

It will be the first-ever meeting between Montana and Kentucky, which ended last season ranked No. 18 in the final AP poll after a second-round loss to Ohio State in the NCAA Tournament.

“The challenge to get to play someone like that, whether it’s at their place or at a neutral, is what you want as a player,” said Schweyen. “We’re fortunate enough to get them at home.”

Despite their proximity, Montana and Gonzaga have not played since 2011-12. The annual series will be renewed when the Lady Griz and Bulldogs, who have been to the NCAA Tournament eight of the last nine years, meet at Dahlberg Arena on Nov. 18.

“Getting that series going again will be great,” said Schweyen. “That was a great game for us for a lot of years, with a lot of interest.”

The team’s nonconference schedule will continue with a trip to Mexico the week of Thanksgiving for the Cancun Challenge, followed by the Lady Griz Classic the first weekend of December.

In Cancun, Montana will face Indiana State and Marquette. The Golden Eagles won 25 games last season and were a No. 5 seed in the NCAA Tournament. They are ranked 18th in ESPN’s early preseason poll for 2017-18.

Joining Montana at the Lady Griz Classic will be Oral Roberts, Long Beach State and Cal State Fullerton. With Long Beach and Fullerton both members of the Big West, the Classic will have predetermined matchups so those two teams don’t face one another.

Montana will play Cal State Fullerton on Friday, Dec. 1, Long Beach State on Saturday, Dec. 2. The 49ers won 23 games last season and came up one point short of becoming the first 15 seed to knock off a 2 seed in NCAA Tournament history when they lost 56-55 at Oregon State in the first round.

Jody Wynn turned that success into the head coaching job at Washington after the season.

Montana will close out its pre-Christmas schedule with games against Stephen F. Austin, Fresno State, Seattle and Rocky Mountain, three of them at home.

Stephen F. Austin won 25 games last season, including a 54-46 victory over Montana at Nacogdoches, Texas, in December and advanced to the WBI. Seattle made the WNIT.

The Lady Griz will get Stephen F. Austin at home, then travel to Fresno for their only road trip in eight December games. Seattle and Rocky Mountain will also be home games, the latter on Dec. 20, the final game before Christmas.

Montana’s day-night, women’s-men’s doubleheader against Montana State will be in Bozeman on Saturday, Jan. 20, and in Missoula on Saturday, Feb. 24.

The Big Sky tournament will return to Reno for the third year in March.