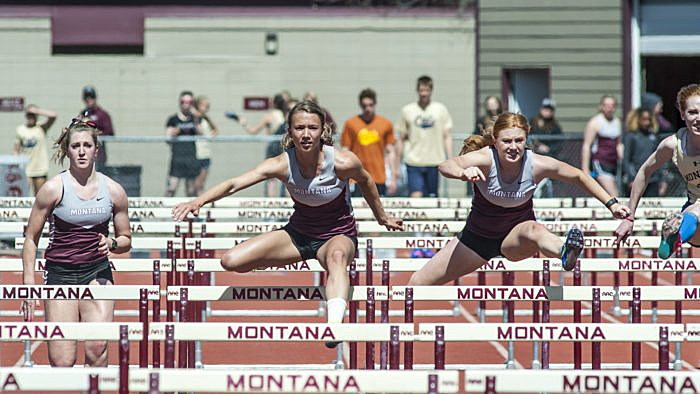 Four years before she would earn her eighth Academic All-Big Sky Conference award — four for indoor track and field, four for outdoor — Nicole Stroot arrived on Montana’s campus and at coach Brian Schweyen‘s office door holding nothing but a dream.

It was the summer after her senior year at Superior High, and she had no scholarship offer from Schweyen. She didn’t even have a walk-on spot, which only adds to the story of an athlete who four times would place in the top three at Big Sky championships in her career.

Already enrolled as a student at Montana, all Stroot asked for that summer day was an opportunity to compete for the Grizzlies. If nothing else, at least a chance to practice with them to show what she could do.

“I didn’t know how it all worked or if they would even give me a chance to be on the team,” says Stroot, one of 72 Grizzlies named this week to the spring Academic All-Big Sky Conference teams, the highest total in the league.

Because of the nature of high school sports in a state with a relatively small population, Schweyen was aware of Stroot, who won multiple Class B and C state titles at Superior, but in track and field, numbers don’t lie.

She won a state title in the long jump as a sophomore at 16-10, as a junior at 17-1. Ho-hum marks but done by a seasonal athlete who also was a standout for Superior in volleyball and basketball, not unusual for small-town Montana.

“I may have seen her jump once but not enough to assess her. We weren’t actively recruiting her,” Schweyen says.

But after meeting with Stroot that summer day four years ago, he trusted his instincts and offered her a spot on his team. “Boy, am I glad she popped into my office and wanted to talk.”

It would be a perfect match, Stroot at Montana, a win-win for both sides.

Stroot, who went from no aid as a freshman to a full-ride scholarship by the time she was a senior, graduated in May with a 3.61 GPA in biology, a warm-up act for the next phase of her life: four years of veterinary school at Oregon State, where she will start in September.

“She wasn’t an average athlete, but Nicole’s marks coming out of high school were average,” says Schweyen. “Her marks weren’t indicative of what she was capable of, and that happens a lot.

“We live off people like that, who come in with average marks but who are good athletes and great students and understand what it takes in terms of hard work. I’d take 20 Nicoles every year if we could get them.”

Stroot joined the team with the expectation from both sides that she would compete in the hurdles and long jump, the two events in which she excelled at Superior.

But it wasn’t long into the indoor season of her freshman year that she was asked if she would like to try the pentathlon. It was a perfect match. It combined Stroot’s work ethic, athleticism and dedication to a program that had given her an opportunity into a competitive multi-events package.

It took time and diligence — and plenty of convincing from Schweyen and UM multi-events coach Adam Bork that Stroot could be one of the best in the Big Sky — but it was worth the effort.

There were small returns on the investment early on, with the big payoff coming her senior year. She placed second behind teammate Erika McLeodin the pentathlon at the Big Sky indoor championships at Pocatello, third in the heptathlon at the outdoor meet in May at Sacramento.

“Coaching plays a part, in how you build confidence in a person and get someone to see what they are capable of. That’s the biggest piece to get someone really good,” says Schweyen.

“Everything else in track and field falls upon the individual, because they are the ones who have to do the work. And that’s where Nicole was really good.”

What was said by Schweyen could have been repeated by a number of professors on campus, because not only did Stroot work her way into a high-caliber Division I performer, she matched it in the classroom, graduating in four years in a challenging major with a lofty GPA.

Organic Chemistry 2 pushed her academic limits, just like learning the shot put did her athletic ones. Same with Advanced Biochemistry and the javelin. All either took was commitment and time. The former came easily. It’s part of who she is. The former she found through discipline.

“It was a great experience all around,” says Stroot. “I thought that if I worked hard enough, I could do it. My friends who aren’t athletes would say, I don’t know how you guys do it. You just have to make it happen.”

Now, a new journey, heavier on the academics, much lighter on the athletics, which can come, or not, at moments of her choosing. Three more years of classroom work, then a year of rotations before boards. Then, finally, a childhood dream realized. Nicole Stroot, veterinarian.

And when it is, she’ll have Montana partly to thank for it. It’s where she learned time management, how to prioritize, how to take 14 hours of work and get it done in 12. And still excel in everything she touched.

“Having done it, I think it will be an advantage (when I go to Oregon State),” she says. “I know what it’s like to plan everything and balance out my time, so I think I’m well prepared.”

* Montana’s 72 Academic All-Big Sky Conference selections came from the spring sports of men’s and women’s outdoor track and field, men’s and women’s tennis, women’s golf and softball. Inclusion on the list requires having participated in half a team’s competitions and a 3.2 GPA.

* The Grizzlies’ 72 selections edged out Weber State, which came in at 71. No other school in the Big Sky had more than 57.

* Schweyen’s women’s track and field team had 32 selections, which surpassed the record for that program by eight.

* Kris Nord‘s men’s tennis program had seven selections, or all the players who were eligible competition-wise, to tie for first in the Big Sky in that sport with Southern Utah. Steve Ascher‘s women’s tennis team tied for second with six, Matt Higgins‘ women’s golf program tied for third with five.

* Stroot and Samantha Hodgson of the women’s track and field program both concluded their careers with eight Academic All-Big Sky Conference awards, four for indoor, four for outdoor. Peter Mimnagh-Fleming of the men’s tennis team maxed out as a four-time winner.

Lauryn Wate was recognized for the 11th time, coming up one short of a four-year cross country, indoor, outdoor sweep.