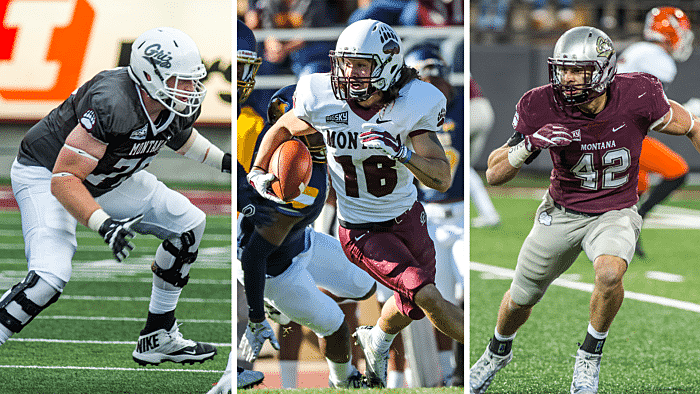 A trio of Montana football standouts have been named to the 2017 preseason All-Big Sky team the league announced Monday at the annual football kickoff event in Park City, Utah.

Record-breaking sophomore wide receiver Jerry-Louie McGee and senior offensive tackle David Reese were both given All-Big Sky accolades, following up on their postseason all-conference awards in 2016.

On the defensive side of the ball, junior linebacker and last year’s Steve Carlson Defensive MVP Josh Buss also earned a place on the preseason All-Big Sky team after earning all-conference honors in the fall.

“We’ve got a lot of good players on our team, and I know they’ll be excited to see those three players are recognized. We hope more players get recognized at the end of the season because of how we play,” said Montana head coach Bob Stitt.

“When a player gets an all-conference recognition, it happens because of the guys around him. I want everyone to be proud of these awards because they had a big part of it.”

Indeed, Montana posted one of the nation’s top passing attacks last year, and Louie-McGee and Reese were key components in that effort.

The Griz averaged 327 yards per game in the air, and 81.4 of those yards belonged to Louie-McGee (5-9, 168, Coeur d’Alene, Idaho. / Lake City HS) who led the Griz with 651 total yards in just eight games played. Louie-McGee shattered two Montana records as a freshman, hauling in 21 receptions against Cal Poly to break Josh Paffhausen’s 1997 record of 15 catches in a single game.

For his efforts, Louie-McGee finished at No. 7 in the voting for the STATS FCS Jerry Rice Award for the nation’s top freshman player.

Former quarterback Brady Gustafson also broke school passing records in 2016, thanks in large part to an improved offensive line led by Reese (6-7, 298, Happy Valley, Ore. / Clackamas HS), which allowed the pocket passer time to find his targets. Reese returns to the O-line having played in every game of his college career, making 35 starts in 36 contests – the most of any player on the 2017 squad.

Buss (6-2, 204, Boise, Idaho. / Mountain View HS) also received preseason All-Big Sky honors after posting 20 tackles-for-loss in 2016 – the most of any sophomore in the nation. That total earned him a place on the HERO Sports FCS Sophomore Defensive All-America First Team.

Buss was the Grizzlies leading tackler last year with 81 total takedowns and 5.5 sacks in addition to his league-leading 20 TFLs. Buss was also named the Big Sky Defensive Player of the Week on Oct. 15, an award he was nominated for five times over the course of the season.

The Big Sky’s Preseason All-Conference Football Team is selected by a mixture of television, radio, and print media, along with institutional sports information directors from around the Big Sky Conference. Coaches do not vote for the preseason list.