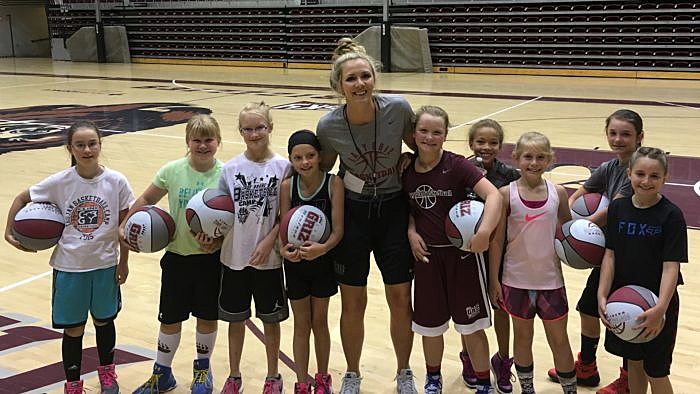 Ten months after making the decision to leave law school to pursue her goal of becoming a college basketball coach, Jordan Sullivan is living the dream, at the only school she ever wanted to be.

After spending last season as Montana’s director of basketball administration, Sullivan, a Lady Griz since birth, first as a fan, then as a player, has been promoted to assistant coach, joining Sonya Stokken and Mike Petrino on second-year coach Shannon Schweyen‘s staff.

“We’re thankful Eric agreed to come on board and take that first-year venture with us,” said Schweyen. “He did a great job helping us with the transition.

“We’re excited that Jordan has the opportunity to move up from her former position and get a chance to do what she’s always wanted to do, which is coach basketball.”

A year ago, Sullivan was preparing for her first year of law school at Montana, but a chain reaction, prompted by Selvig’s decision to retire, ultimately led her to the job she’s long wanted.

Sullivan didn’t have the background or experience at the time to be considered by Schweyen for one of the new coach’s open assistant positions. Those were filled by Petrino and Hays.

But when Schweyen’s first choice to be the program’s director of basketball administration, former Lady Griz Katie Baker, was lured away by Oregon State not long after being hired by Schweyen, Sullivan couldn’t say no to the opportunity to get her foot in the door, even weeks into law school.

She would be around the program on a daily basis, seeing the ins and outs, but not be able to coach on the court. A test drive of sorts, a chance to see what goes into being on the staff of a Division I women’s basketball program.

And she took the position knowing law school would hold a spot for her in a future class should she ever reconsider.

“I hoped something would work out. I knew it was going to be a good experience regardless if I decided I wanted to get into coaching,” Sullivan said. “I love Montana, so why not try to get into it here?”

It’s no surprise it was everything Sullivan thought it would be. Basketball 24-7? And get paid to do it? Even with the team’s 7-23 finish last year, Sullivan was convinced her future was on the court, not in court.

Or maybe it was just destiny that the daughter of former Lady Griz Sandy (Selvig) Sullivan would play for the same program. Or that the niece of Robin Selvig would take up the same career path.

He was four years removed from his Montana playing career when he got his start coaching the Lady Griz. Sullivan is at the same point: four years since taking off the maroon for the final time.

“Jordan’s passionate about basketball and always has been since she was a little girl coming to camps and later playing for the Lady Griz,” said Schweyen.

“She’s a Grizzly through and through. She has that in her blood. It’s great that she will be able to carry on the tradition.”

If anything could have had Sullivan, who’s known almost nothing but success when it comes to all things Lady Griz, a program that made decades-long success look easy, second-guessing her decision to leave law school for basketball, last season was it.

The team lost early in the season both Kayleigh Valley and Alycia Sims to the scourge of the torn ACL. Young, not-quite-ready-for-primetime players were pushed to the fore, and losses piled up, more than any in program history.

It didn’t dissuade Sullivan as much as show her a new side of things.

“Having a tough year like we had, it can be tough to keep the team energized,” said Sullivan, who was second-team All-Big Sky Conference as a senior in 2013-14. “We’ve had some so-so seasons, but nothing like that. It can be hard to keep everyone positive when you don’t win a lot of games.

“On the coaching side, you’ve got to show up every day and be high energy so the kids can match that. That was something new to me.”

Sullivan’s first official day in her new position was July 1. For the first time she was able to go out on the road as a recruiter, representing the program and identifying talent at the End of the Trail National Showcase in Oregon.

Find it, then one day try to convince it to come to Missoula to have the same experience she had.

But when you love a place and a program like Sullivan does, recruiting comes naturally. It’s when you don’t have history with a place or feel an investment in what you’re a part of that it becomes a tougher sell.

She’s going to be a natural.

“Jordan will be a great recruiter,” said Schweyen. “She’s confident and has a good presence about her. And she has deep ties to Lady Griz basketball. It’s always nice to have somebody who has actually played in the program and can speak from experience about what an incredible place this is.”