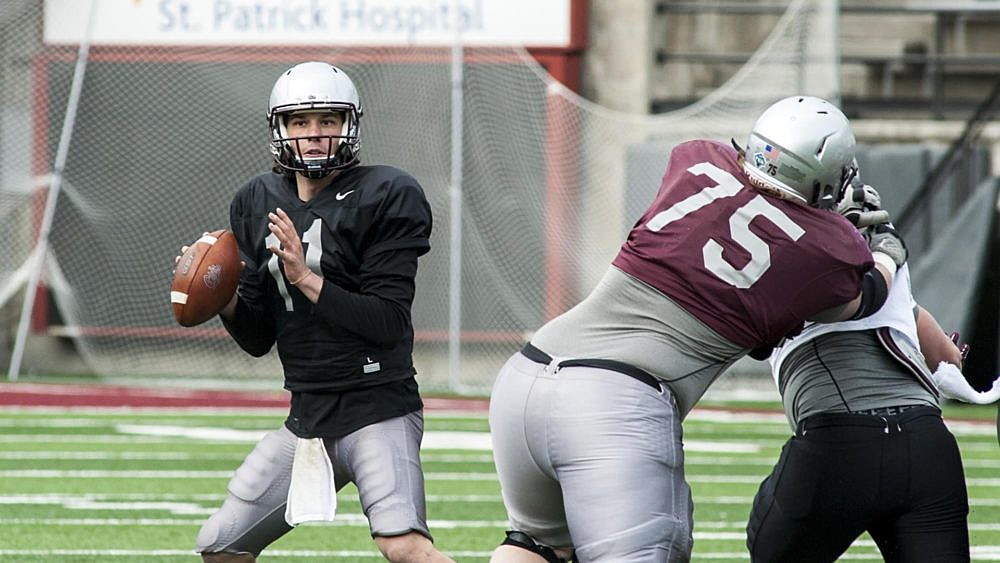 It takes time to learn all of the intricacies and elements of a Bob Stitt run offense, but the 2017 Grizzly team appears to be clicking on all cylinders after the completion of the final fall scrimmage. The offense moved the ball efficiently and quickly, scoring 42 points and racking up over 500 yards.

Reese Phillips, who appears to have a good hold of the starting quarterback job, led the Maroon team to an effortless first drive, completing all three of his passes and picking up yards on the ground.

He found Keenan Curran in the back corner of the end zone for his first and only touchdown pass on a day that saw him lead four drives. Phillips ended the day 12-of-15 for 168 yards, but he did throw a pick-six to Dareon Nash. Coach Bob Stitt liked the poise showed by his senior quarterback.

“He’s feeling really comfortable now with what we are doing and he’s got the physical tools to throw the ball and do some things with his legs, but mentally he is where we wanted him to be,” Stitt said.

The defense rested most of its starters, electing instead to give time to some younger players, but the offense hummed right along no matter who lined up across from them in white jerseys. The Maroon team used five different quarterbacks who combined to go 32-of-37 for over 400 yards.

“You can’t take anything away from what the offense was doing because it was pretty clean,” Stitt said. “It’s important for us to get those younger guys in on defense and build depth and we didn’t want any starters on our defensive side to take any hits.”

Gavin Crow and Andrew Harris both made big contributions on the defensive side of the ball, both recording a sack while also leading the team with nine and eight tackles, respectively. Nash’s interception return was the highlight of the day for the defense, but Curtis Holmes also brought the energy with a big hit later on in the scrimmage.

The last play of the day may have been the best, when a couple of true freshmen connected for a touchdown. Nate Dick, after leading a steady start to his only drive at quarterback, held his ground in the pocket before dropping in a 38-yard strike to Mitch Roberts.

Tanner Wilson, another freshman, also led a drive at quarterback, completing both of his passes for 61 yards.

“It was a fun day because we got to see all of the freshmen play and got to see the two freshmen quarterbacks do their thing, both moved the ball down and scored,” Stitt said.

And while the air attack looked great, the ground game also did work for Maroon. A mix of 12 different players combined to run the ball for nearly 200 yards on 52 carries.

The Griz will now begin preparations for Valparaiso on Sep. 2.

“It’s just fun to now scheme against something other than our defense,” Stitt said. “It is nice to put that to rest and go look at something different and have to scheme up our stuff against what they do.”