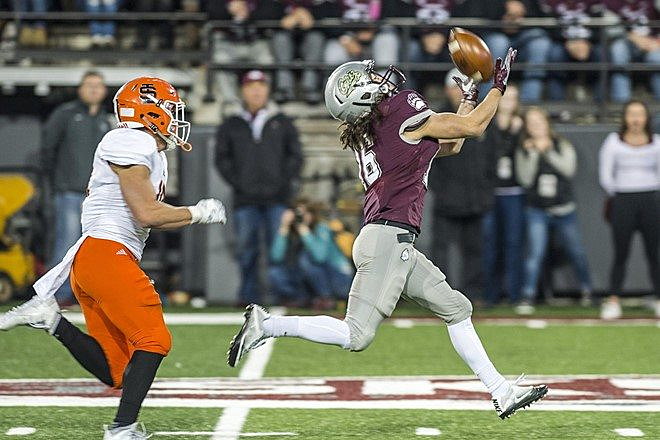 At an average of 326.5 yards per game in the air last season, the Montana Grizzlies posted the fifth-best passing attack in all of FCS football.

More than 248 of those yards return to accelerate the Grizzlies’ spread attack in 2017, and with guidance from a key group of senior leaders, UM’s receiving core is looking for a breakout year.

Third-year receiver coach and Griz alum Mike Ferriter is excited about his position going into the new season.

“I feel like we have a deep group. For the first time, I feel like we could play eight to ten guys any given Saturday,” says Ferriter.

While names like Jerry Louie-McGee and Justin Calhoun streak down the sidelines, Ferriter says this year’s success will come back to the leadership of the seniors inside at the “H” position.

“Not a lot of people know, but I think you start with Makena Simis in that group as being the driving force,” says Ferriter, “He hasn’t played a lot of snaps as a receiver yet, but he is going to have a good season at this position.”

Josh Horner is the other senior in the “H” backs and has the most experience with 26 appearances to his name over the past three seasons.

“His veteran leadership is what the group of receivers need,” Ferriter added.

For the outside receivers, both Ferriter and head coach Bob Stitt agree the 2017 passing attack starts with Keenan Curran and Justin Calhoun.

Curran and Calhoun come into the year with the most experience at the “X” and “Y” outside slots. Curran started every game his sophomore season, catching 40 passes for 601 yards that included 75-yard season high.

Calhoun has a breakout season as a redshirt freshman, hauling in 625 yards on 42 grabs for an average of 56 yards-per-contest.

Behind them is a youthful group looking for the chance to prove themselves.

Redshirt freshman Sammy Akem, sophomore Kobey Eaton, and Whitefish native Jed Nagler are just a few of the other young receivers who will be competing for playing time after solid spring performances.

Akem hauled in four catches for 34 yards in the spring game, while Eaton and Nagler combined for four catches for 39 yards, but with each standing tall in the 6-foot-4 range with the long strides and wingspan to match, expect to see plenty of balls thrown their direction.

Standing at 6′ 5″, Brennan Corbin also showed what he is capable of over the course of spring ball, and will be looking to make an impact as a redshirt-freshman.

Rounding out the receiving group at “Z” is Jerry Louie-McGee who is no longer a stranger to opposing defenses after leading UM in receiving in 2016 after playing in just eight games.

“He’s not a nobody anymore, people expect him to do things,” says Ferriter. “He has to continue to improve at the things he does and work hard in the film room.”

Although Louie-McGee has plenty of quality game experience, he is still only going into his redshirt sophomore year. At his young age, the leadership role is one he is still settling into.

“He also has to continue to develop those leadership qualities,” adds Ferriter, “Everyone looks at Jerry to be one of those guys, and he has to accept that responsibility.”

Also ready for a breakout season in a supporting role at “Z” is redshirt-freshman Samori Toure, who led the white team in the annual spring game with a 37-yard touchdown reception and 48-yards total on three grabs.

“Samori was a guy who had a good spring but is still young,” says Stitt, “He should give us some excitement at the “Z” position as well.”

Players report to fall camp on Sunday, August 6, with the first practice scheduled for Tuesday, Aug. 8.