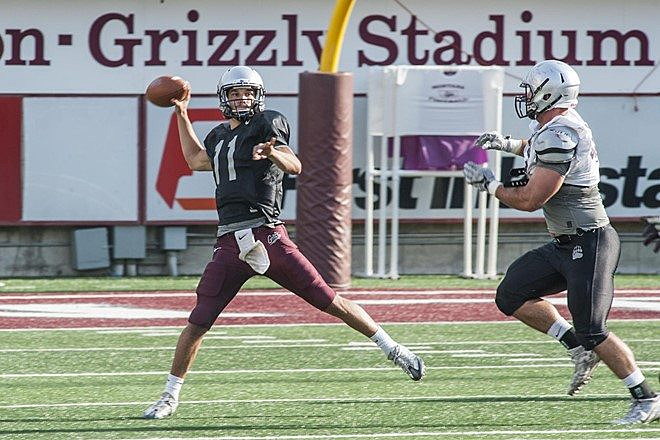 The Montana Grizzlies are exactly two weeks away from the home opener against Valparaiso on Sept. 2, and following the team’s second scrimmage, the pieces are starting to fall into place for the offense.

The Griz put up 20 points over the course of 83 plays, with just under 400 yards of total offense, accomplishing the two things head coach Bob Stitt wanted to heading into the 8:30 a.m. kickoff: “execution and no silly penalties.”

“We really cleaned some things up,” said Stitt. “We stayed on schedule and always gave ourselves a chance on third and fourth down. I thought the execution was pretty clean.”

Led by senior QB Reese Phillips, Montana’s offense came out of the gates firing, piecing together a clinical 13 play, 70-yard drive to open the game. The drive was capped off by a two-yard fade pass to Justin Calhoun for the first score.

“It was a long drive, but not a perfect drive,” said Phillips. “Defense still made tons of plays, but we kept our composure, and we didn’t get worried if it was second and long or third and long, we’re fine.”

“We trust the plays, and we do what our coaches tell us to do, and look what happens, it works out. We’re just really trusting our coaches right now.”

For Stitt, it was an early sign the Griz had built on what they had learned from Monday’s scrimmage as the coaches begin to fill in the depth chart.

“It’s getting better every day. In our first scrimmage, we were very close on a lot of plays, but they didn’t look very good from the stands, and today we went out and executed them,” Stitt said.

“I just told the guys you’ve got to give us your best, and what you put on tape today, you’re telling the coaches, that’s your best, and it better be good so we can evaluate and put you on the depth chart on top.”

Phillips cemented his place on top of the depth chart, receiving all the snaps with the first team, and putting together another solid stat line of 13 completions on 21 attempts for 155 yards and a pair of touchdowns.

The senior transfer from Kentucky says that after two weeks of camp, he’s settling in with his teammates, and starting to find a rhythm, as evidenced by four scoring drives and three drives with 10 or more plays.

Montana’s defense wasn’t totally shut out of Saturday’s scrimmage, however, asserting themselves with 13 tackles-for-loss and taking a single turnover.

Late in the game, redshirt freshman Dareon Nash made a diving interception on a Caleb Hill pass intended for Brennan Corbin for the defense’s only takeaway of the day.

“Our defense is solid. They got another turnover today, that’s going to be big for us, and they’re not giving up big plays. They’re making our offense grind it out,” said Stitt. “They’re going to make you earn it this year, and I love the way they’re playing.”

Hill finished the game 8-9 passing, with 53 yards and just the one interception, but he also was the team’s third-leading rusher, stretching his legs out for 19 more yards on five attempts. Phillips also picked up plenty of yards with his feet, running for 39 yards on eight attempts.

After Phillips’ opening scoring drive, the Griz defense held for two more series before the offense got back into it.

Hill put together the next scoring drive that consisted of 16 plays and finished with a 40-yard field goal from Tim Semenza.

Phillips then came back out on the next drive and picked up five first downs in seven plays, highlighted by a 14-yard burst up the middle by Jeremy Calhoun.

Two plays later, Phillips rolled out of the pocket and found senior H-back Makena Simis on a corner route for a 16-yard touchdown.

Brandon Purdy finished off the scoring with a 28-yard field goal on the second to last drive of the scrimmage.

All this adds up to a team that is starting to believe in itself. And with two weeks of practice before the home opener, the Griz are just getting going.

“If you’re a fan, coach, or just a bystander, you can tell how much different we are from spring practice,” said Phillips. “If we have a mistake, it’s so much better; we just bounce back. We forget it, we flush it and move on. We saw a couple of times, the defense stopped us, and we’re in third and long, second and long, but we made plays. It’s progression. That’s what it is. We’re starting to get comfortable, and I think we’re starting to realize how good we can be.”