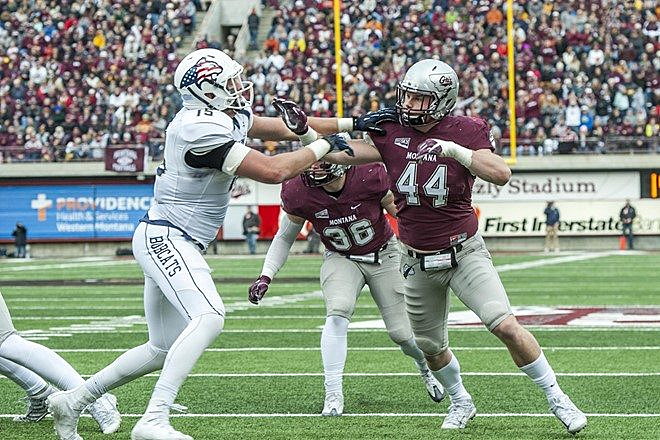 After a long offseason spent chomping at the bit to get back out and prove themselves, the Montana Grizzlies will finally get that chance on Saturday, Sept. 2 in the 2017 season opener.

“We’ve put so much work in since the last game of last year, and we’ve come so far as football team both physically and mentally, but probably more mentally,” said Montana head coach Bob Stitt at his weekly press conference on Monday. “It’s time to get ’em out on the field and see them do their thing.”

The Griz host the visiting Valparaiso Crusaders, a Pioneer Football League program out of Valparaiso, Indiana, to usher in Stitt’s third season as Grizzly mentor.

THE GAME: The Griz enter 2017 as a relative unknown, despite the fact the program returns a robust nine starters on defense and eight on offense.

After a 6-5 season in 2016 that saw UM miss the playoffs for just the third time in 24 seasons, Montana has flown under the radar this preseason, missing out on a place in early polling.

But the vibe around Griz camp has been one of sheer optimism this fall, with high energy and constant improvement on both sides of the ball as this year’s team sets out to prove that rankings are just a number and that they belong among the best in the FCS.

“Valpo” – a school perhaps best known for its basketball program after advancing to the Sweet-16 in the 1998 NCAA Basketball tourney with a last second win over Ole Miss – comes to Missoula as a team on the rise.

The Crusaders were selected to finish at No. 10 in the preseason Pioneer League poll, but head coach Dave Cecchini (pronounced: Chuh-KEE-NEE) returns 16 starters in his fourth year at the helm.

Wide receiver Frank Catrine and running back Jarrett Morgan – both All-Pioneer picks last season – return after leading Valparaiso in receiving and rushing. All-Pioneer linebacker Drew Snouffer returns after leading the team in tackles and sacks in 2016 as well.

Kickoff from Washington-Grizzly Stadium is set for 1 p.m. on Saturday. This week’s game is presented by Western State Cat.

WATCH: The Griz season opener against Valparaiso can be seen statewide on FOX Montana stations, as well as SWX Montana in the Billings/Miles City market. If you live outside the state, you can catch the game on Altitude Sports Network, or you can watch worldwide via web stream at GoGriz.com. To find out if you have the necessary channel to watch, visit the “Where to Watch” page on GoGriz.com for complete details.

LISTEN: “Voice of the Griz” Riley Corcoran will have the call of Saturday’s game, supported by long-time color commentator Greg Sundberg in the booth.

Fans can tune-in statewide to hear the call on the Montana Grizzly Sports Network, or visit gogriz.com to listen to the audio-only web stream from anywhere on the planet (with wi-fi).

SERIES HISTORY: This is the first-ever meeting between the Griz and Crusaders. Montana last faced a Pioneer League opponent in the 2014 FCS playoffs when San Diego came to Missoula and faced a 52-14 whitewash by the Griz in a snowy Washington-Grizzly Stadium.

For the fourth-straight year, San Diego represented the Pioneer League in the FCS playoff bracket with an 8-0 conference record in 2016, picking up their first-ever postseason win with a defeat of the Big Sky’s Cal Poly Mustangs.

The Griz have two other PFL opponents lined up on future schedules. Drake comes to Missoula in 2018, as does Moorehead State in 2020.

WHITE OUT: Saturday’s game is a “White Out” of Washington-Grizzly Stadium. Fans can purchase their official White Out shirts at Universal Athletic, The M Store in downtown Missoula, the University of Montana Book Store on campus, as well as the GSA office in the Adams Center, with a portion of the proceeds going back to the GSA.

LOOKING TO KEEP THE STREAK ALIVE: The Grizzlies have won every season-opening game inside Washington-Grizzly Stadium since 2003 when North Dakota State upset the Griz in Missoula – a 14-game win streak.

Since Washington-Grizzly Stadium hosted its first season opener in 1987, the Grizzlies have gone 26-4 in opening games. Montana’s all-time record in the friendly confines is 192-29, an 87-percent winning percentage.

Each week, Stitt and his staff will select a new group of seniors to lead the team out of the tunnel as game day captains.

WHEN YOU’RE HOT, YOU’RE HOT: Senior Korey Alexander will also lead the team as the “coin-toss captain,” representing the team in the pre-game coin toss at midfield. Alexander, a senior safety from Pittsburg, Calif., won the honor by winning a whole-team toss-off, going undefeated on heads/tails calls throughout the contest.

PLANNING FOR THE FUTURE: 26 of Montana’s 31 newcomers to the 2017 squad will redshirt this season, allowing the coaching staff to build for the future of the program. Freshman safety Isiahia Banks out of Mullen HS in Colorado is scheduled to dress for the Griz on Saturday, to be used only in case of emergency.

The last time Montana dug into its supply of true freshman was in 2015 when running back Jeremy Calhoun took the field at UC Davis and proceeded to rattle off nine touchdowns that season.

SCHYE’S FRIST START: Defensive end Tucker Schye became a household name for Griz fans in December when he was selected to be the next to wear the #37 jersey. He’s no stranger to the field, however.

Schye, a redshirt-senior from Malta, leads the team in career appearances with 38. Despite plenty of playing time at both linebacker and defensive end, Schye will surprisingly receive his first-ever start for the Griz on Saturday, in what can only be described as a nod to Montana’s illustrious line of pass rushers before him.

IRON MAN REESE: Senior offensive tackle David Reese returns to lead an experienced offensive line this season as the most experienced player on the team.

Reese has started nearly every game for the Griz since arriving on campus as a freshman, amassing 35 consecutive starts. That’s three-straight years of starts. For comparison: no other Grizzly has started for more than one full year (11 games).

THROUGH THE UPRIGHTS: Brandon Purdy has won the kicking job for the Grizzlies after a close completion with fellow redshirt-sophomore Tim Semenza in camp.

OTHER CAMP COMPETITIONS: Senior quarterback Reese Phillips has, as expected by the coaching staff, won the starting QB job at Montana after embracing the senior leader roll during the offseason.

Phillips gets his first start as a quarterback on Saturday since his senior season of high school in 2013 and has shown steady and measurable improvement since the spring season. The Kentucky transfer went 12-15-1 for 168 yards and a touchdown in the team’s final scrimmage of fall camp last week, leading the offense on a six play, 70-yard drive out of the gates to cement his spot as the starting QB.

PERSISTENCE PAYS OFF: Senior Mike Ralston has also won a starting spot at right tackle – the fourth position he’s played for the Griz in his career. Ralston started four games for the Griz as a tight end in 2014 before moving over to the defensive side of the ball in 2015 as a DE.

In 2016 he moved once again, slimming down as an “H” wide receiver. The Oregon City, Ore., native has since bulked up to an impressive 302 pounds to earn a spot on the O-line.

Sophomore return specialist and wide receiver Baily Gessinger piled up 808 combined kick return yards last season, the most in the PFL and the eleventh-most in all of FCS football.

The Crusaders had the fewest penalty yards in the PFL last season at 48.4 and had just 54 flags thrown their way, tied for No. 16 in the FCS in fewest penalties.