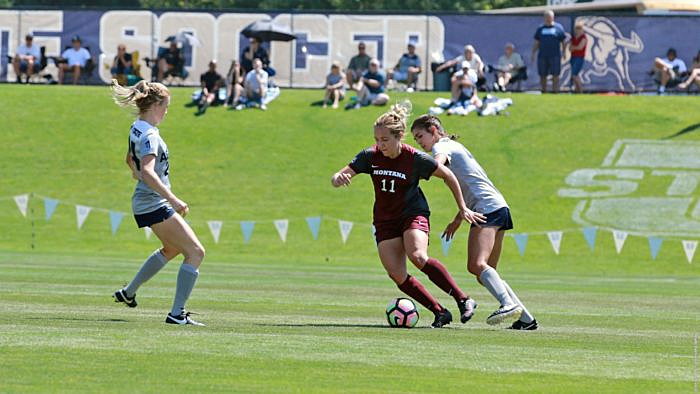 LOGAN, Utah – The Montana Grizzlies fell to 1-1 on the young season, dropping a 2-0 decision at Utah State on Sunday afternoon. The two teams were scoreless at the half, but Utah State took advantage of back-to-back second-half goals to earn the win.

“I thought we showed some great stuff today and played much better than we did on Friday night,” head coach Mark Plakorus said. “Unfortunately, we faced some adversity in the second half and we didn’t respond very well to it.”

Montana had plenty of opportunities in the opening half, recording seven shots – including three shots on goal – in the initial 45 minutes alone. That equaled their total number of shots from Friday’s victory at Boise State. However, the Griz were unable to find the back of the net.

Utah State (2-0) applied pressure in the first half as well, posting five first-half shots, including two in the 3rd minute. Neither team could find separation, however.

“I think this game was more of a game of two halves,” Plakorus said. “In the first half, we were able to settle into a good rhythm and move the ball extremely well, even getting into dangerous spots. I was extremely pleased with how we played the first half.”

The Aggies didn’t take their first shot of the second half until the 64th minute, but it would be enough for victory, as Ashley Cardozo scored her first goal of the season, assisted by Brinley Adams. The score came off of a throw-in, a long shot from the top of the box that was just out of the reach of a leaping Claire Howard.

Less than 4 minutes later, Bailee Hammond found the net on a cross shot, assisted by Amber Marshall. Hammond was in the box on the right side, shooting the ball across her body and past a diving Howard to hit the left back of the net.

“We made a mistake, but they hit a great shot and it put them up 1-0,” Plakorus said of Utah State’s first goal. “We got a little bit disorganized and become too one dimensional in the second half. We just had a hard time creating anything too dangerous.”

The Griz, despite all of the early pressure and scoring opportunities, got just two more shot off, by Ellie Otteson in the 80th minute and Hallie Widnerin the 88th. The attempts were both saved by Utah State goalie Sara Cobb, who finished the game with five stops.

Montana out-shot Utah State, 11-9, and had five shots on goal to Utah State’s four. The Griz also had one more corner kick, but was unable to take advantage. The Aggies are now 2-0, following a double-overtime victory over South Dakota State on Friday.

The Griz will regroup before hosting the Montana Cup this coming weekend. Montana will host Air Force on Friday and San José State on Sunday. The Falcons and Spartans will also face Eastern Washington over the weekend.

“We’ll take the lessons we learned in this game, just like we did on Friday, and get better during the week of training,” Plakorus said. “I think we’re disappointed, which is a good thing. We’ll get back to work and give it another go on Friday night against a really good Air Force team. It’ll be good to play in front of our home fans.”