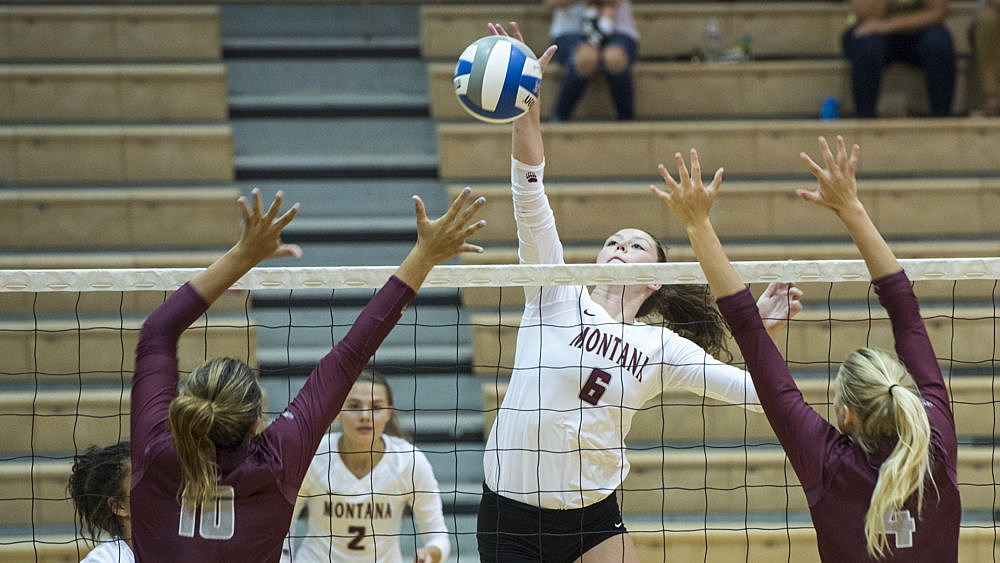 Montana rallied back from an early deficit to defeat UTEP in four sets on Friday night at the North Texas Invitational in Denton to make a winner of Allison Lawrence in her first match as head coach of the Grizzlies.

Mykaela Hammer and Cassie Laramee, the team’s junior co-captains, both had 14 kills, Baily Permann, in her collegiate debut, added 12 kills on .400 hitting, and setter Ashley Watkins led her team to a .256 hitting performance.

“It was a great time,” said Lawrence. “It was fun to watch them compete hard and just enjoy putting on display everything we’ve worked hard to create.”

It was a match the Grizzlies weren’t scheduled to play. Because of concerns about Hurricane Harvey, Prairie View A&M, Montana’s original Friday opponent, dropped out of the tournament on Thursday.

That opened up a spot for UTEP, which was without any weekend matches after Incarnate Word canceled its own tournament in San Antonio for the same weather concerns.

“I was a little bit jittery but really just excited to get started,” said Lawrence. “We went to bed last night thinking we weren’t even going to get a match today, so we were ready to get on the court. We couldn’t wait for it.”

The Miners hit .360 to take the opening set and built a 24-22 lead in set two. Kills by Missy Huddleston and Janna Grimsrud evened the score, and those two teamed up on a block with UTEP holding set point to make it 25-25.

After Hammer evened the score once again at 26-26 with a kill, the play of the match went Montana’s way.

UTEP’s Amanda King was called for a bad set but the referee pointed for UTEP to serve, meaning the Miners had won the point. Chaos ensued. After order was restored, Montana led 27-26, and Permann gave Montana its first set win of the season, 28-26, with a kill.

“That was a tight call. It went in our favor and the set went our way, and we got a ton of momentum out of it,” said Lawrence. “That was a pretty big blow to them.”

The third and fourth sets weren’t close, as Montana hit .380 and served up 10 of its 13 aces for the match.

The Grizzlies jumped out to a 9-3 lead in set three and had six aces in that set alone. Shannon Casale served most of an 8-0 run that turned a 10-10 deadlock in set four into a Montana runaway. The Grizzlies had four more service aces in the fourth set.

Five players had two or more service aces for the match, with Casale, Hammer and Laramee all finishing with three.

“I’ve got to give so much credit to everyone at the service line,” said Lawrence. “Serving is an indication of courage and of confidence. I know we were nervous going into this match, but you wouldn’t have known it from the service line.

“Shannon in particular went back there and scored run after run of points. She hit every zone I called. Serving opened up the match for us. That shows me we’re in a good place mentally right now.”

Grimsrud hit .500 and led Montana with four blocks. Watkins had a career-high 41 assists.

The Grizzlies had 17 more kills than the Miners to hit a better percentage than they did in all but one of their previous 33 matches, early payoff for the work put in by Lawrence and her assistants Giedre Tarnauskaite and Dana Cranston as they work to turn around Montana’s fortunes.

“It was just fun. It was fun to work with G and Dana,” said Lawrence. “They did an incredible job of getting information to the people who needed it.

“The three of us worked well together, and that’s exactly the way I wanted it. Our team responded to everything really well.”