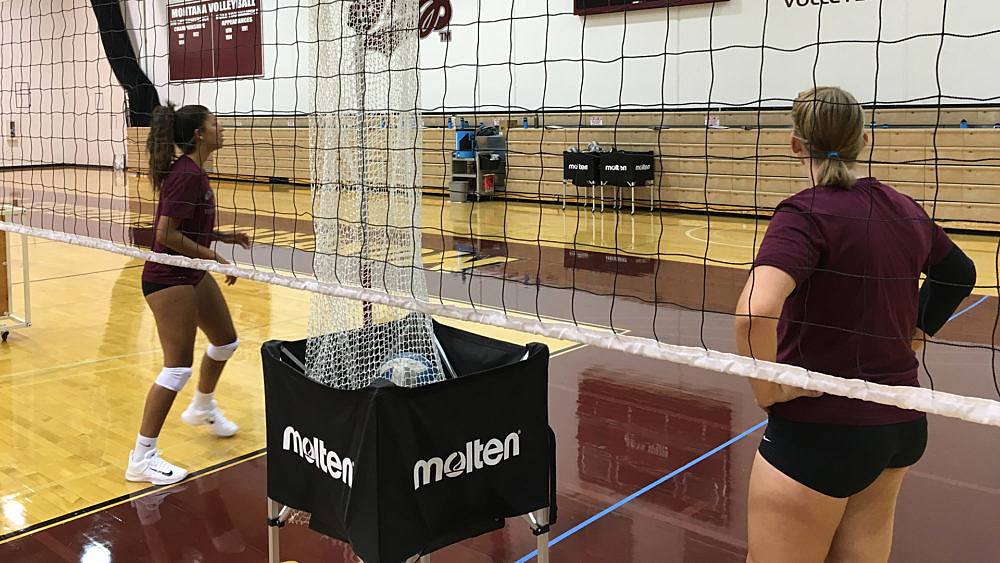 The face was familiar but the role was new as first-year head coach Allison Lawrence put the Montana volleyball team through its first practice of the season on Tuesday morning in the West Auxiliary Gym.

Lawrence, an assistant in the program since 2010, was elevated to head coach in January after former coach Brian Doyon, who is now an assistant at Central Florida, stepped down in November.

Lawrence inherited a team that went 19-64 the previous three seasons and missed the last two Big Sky Conference tournaments, which led to a change in leadership.

Her task is easily simplified into a few bullet points — win more matches, create a healthier program, give players a better, more positive, experience — but the route to get there will be difficult.

“The biggest challenge for us will be changing the way we think. That’s something easy to talk about but hard to do,” she says. “It’s not something that is going to happen overnight or 100 percent right away.”

Which makes this season about much more than just the volleyball being played on the court, but for no coach can the person be separate from the player. Both need to be brought along at the same time.

“One thing we need to focus on is our daily habits and the mental toughness we exhibit on a daily basis,” she says. “That means doing what we’re asked to do the right way all the time, because every decision is a conscious choice being made to step toward our goals or step away.

“The other is focusing on other people instead of ourselves. The focus needs to be on being the best I can be for this team and my teammates instead of always wondering what’s happening with me and all that other toxic thinking.”

The team will have a full practice schedule this week. Next week the Grizzlies will take a one-day break from practice for a trip to Flathead Lake. They’ll wrap up week No. 2 with an intrasquad scrimmage on Friday afternoon, Aug. 18.

The following week leads into the first competition of the season, with matches against Prairie View A&M, Tulsa and North Texas at UNT’s tournament in Denton, Texas.

Cranston, who later played professionally in Europe, was the Mountain West Conference Player of the Year as a senior in 2012. She spent last fall working as a volunteer assistant at CSU under Tom Hilbert, who has led the Rams to the NCAA tournament every season since being hired in 1997.

“One thing I love that Dana brought to the program is the idea of competing at everything we do,” says Lawrence. “She finds ways to create competition even within our warmups.

“She brought another level of awareness to the team and really challenged them to believe that they can out-compete anyone at any time, and pass somebody up and go win the job.”

Challenging for those starting and reserve positions will be a blend of nine players who saw the court last season, alongside seven who did not, including four true freshmen.

The team lost last year’s leader in assists when setter Raegan Lindsey graduated, but Montana returns the players who accounted for more than 98 percent of the team’s kills last season.

But any season preview under a new coach should best be kept vague, without projections. No one, not even Lawrence, knows who will be starting or coming off the bench on Aug. 25.

“It’s completely open. Nothing is set in stone,” she says. “I hope the team feels like if they came in fit from the summer and are ready to go and are mentally tough and a good teammate, they can be a go-to person, that they can go take it.”

While Montana returns much of its offensive production, the team hit just .117 last year, by far the lowest percentage in the Big Sky and one of the lowest in the nation.

Fifteen of the Grizzlies’ 21 defeats last fall came by 3-0 sweep. Three of their five wins came only after going to five sets.

But the margin between winning and losing was closer than those numbers indicate. It became routine last season that the team would be in a match that was tied 20-20 but lose 25-21.

“When I think of our team, that’s the biggest puzzle to me,” says Lawrence. “When you take us athletically, I think we hold up pretty well. We’re quick, we’re strong, we jump well. We can do the things athletically that our opponents can do.

“There are analytic answers, about who is getting set and things like that, but to me there is a mental component that is broken. I don’t think we trust each other down the stretch. I don’t think we know who we want the ball to go to. That’s what we have to get to the bottom of.

“Is it a fear of failure? Is it a fear of success? Is it a sense of, here we go again? I think we make a choice to back off, whether we’re aware of it or not. To me, the answer is in there, and that’s going to take the longest to fix.”

Montana will open its season against Prairie View A&M, a team that went 10-19 last year, at North Texas’s tournament.

The next week, at Utah Valley, the Grizzlies will face Long Beach State and Kansas, a team that went 27-3 last year, but tournaments at Drake and Southern Illinois-Edwardsville will provide a number of matchups that, at least based on last year’s records, should make them more 50-50.

“I tried to keep it heavier on teams that are similar to us. Any momentum we create is going to do more for us than playing a ranked team and figuring out our deficiencies,” said Lawrence. “We already know our deficiencies.

“Learning how to win is a skill, so the priority was putting us in a situation where we can still have some success in a match even if we stumble a little bit.”

The Big Sky Conference schedule will open with road matches at Eastern Washington and Idaho on Sept. 21 and 23. The team’s home opener will be against Sacramento State on Thursday, Sept. 28.

The Big Sky preseason poll is expected to be released on Friday.