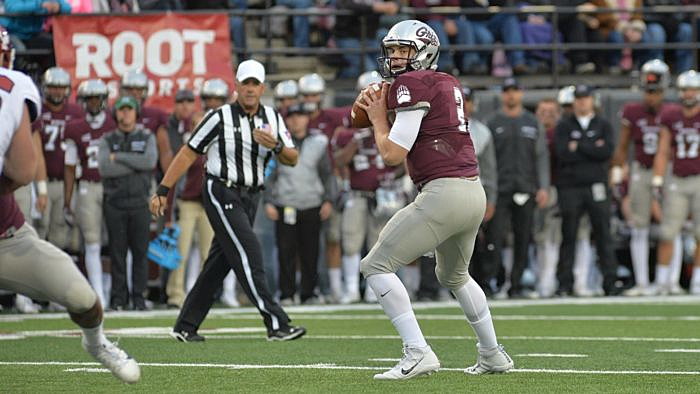 Montana opened conference play with a loss to No. 11 Eastern Washington on Saturday evening, giving up 42 second-half points and falling 48-41 in front of a sold-out crowd at Washington-Grizzly Stadium.

After building a three-possession lead in the first half, the Griz defense had no answer for EWU quarterback Gage Gubrud – the 2016 Big Sky Offensive MVP and preseason favorite to repeat. Gubrud completed 44 passes for 549 yards and four touchdowns, helping EWU to its ninth consecutive Big Sky victory dating back to 2015. Two Eagles receivers went for 100-plus yards, with Nic Sblendorio setting a school record with 18 catches for 189 yards.

“We played a really good football team and a really, really good quarterback,” head coach Bob Stitt said. “Hat’s off to them. They came into a very hostile environment and went into halftime with a lot of adversity, and came out and played very well and bounced back. They’re a team that’s won a lot of games and they know how to win.”

Of EWU’s nine second-half possessions, it scored six touchdowns and missed a field goal on another. Still, though, the Grizzlies had their chances, forcing an interception early in the third quarter and a punt late in the fourth quarter to give the home team the ball, down 7, with 3:13 remaining.

Montana was stopped on fourth down, however, turning the ball over on downs for the third time. The Eagles scored just 41 seconds later to take its largest lead of the game, 48-34.

The Grizzlies didn’t throw in the towel, marching down the field for a nine-play, 77-yard touchdown drive in 1:15 to cut the deficit to a single score with 50 seconds remaining. UM’s on-side kick went out of bounds, though, allowing the Eagles to run out the clock.

Despite the result, Stitt was proud of his team’s performance and fight.

“I’m very proud of our team,” he said. “There was a lot of really good football that was played today and our guys gave us everything they had. Our defense had to defend 96 plays and our guys never ever let down. They’re (EWU) the No. 11 team in the country; we’re a good team. I couldn’t be more proud of the way our guys fight.”

The first half was much different than the second, with Montana scoring on three consecutive drives late in the first quarter to build a 17-3 advantage over one of the nation’s top teams. On the final play of the opening half, UM extended its lead to 24-6 with a 44-yard Hail Mary from Gresch Jensen to Justin Calhoun.

“I saw Justin and threw it up for him,” Jensen reflected. “I gave him the opportunity at the end of the half and he made a play.”

Making his first career start, Jensen completed 25 of 49 passes for 358 yards and two touchdowns. He also rushed for another score. Calhoun was his biggest target, with the wide receiver catching three passes for 106 yards.

Coming out of the intermission, EWU cut the score to 24-13 with a quick touchdown, but came up empty on its next two possessions. After reaching the 13-yard line on its second drive, Markell Sanders intercepted Gubrud’s pass. On the following possession, EWU again threatened but missed a field goal. The Griz answered with a field goal of its own to extend the lead to 27-13.

But then the shift happened. The Eagles countered UM’s field goal with a 69-yard drive in 54 seconds. On the next play, Jensen threw an interception, and one player later, EWU was in the end zone again to tie the score.

“That touchdown to Dre was a big one,” said Gubrud. “That’s when I felt the momentum swing.”

The Eagles once again responded, scoring on their next two possessions – making it consecutive trips to the end zone.

Despite EWU’s yards total, several UM defenders stood out, including Josh Buss, who had 17 tackles and 2.5 tackles for loss, and Tucker Schye, who had three sacks and a forced fumble that he recovered. His forced fumble came in the first quarter and set up Montana’s second touchdown. One of his sacks came on the play preceding Sanders’ interception.

James Banks had 14 tackles, Josh Sandry had 10. In total, the Griz sacked Gubrud five times. Brandon Purdy was 2-for-2 on field-goal attempts.

“We are not happy with losing a ballgame,” Stitt said. “None of our guys play to lose a ballgame because it feels awful, but we’ve got to pick ourselves up and become stronger from this. We’re going to be just fine. These kids will stick together. They’ll hurt together tonight. They’ll talk about it. All it takes is great preparation next week and you go get a win and you feel like a million bucks. That’s the great thing about football.

“This is a team that’s going to get better every single week. We faced a great team early in the league schedule and it’s going to help us down the line.”