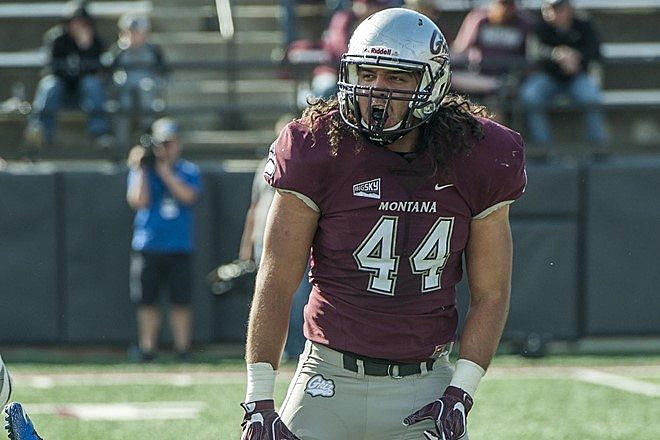 If you asked Montana football pundits and prognosticators for their predictions on how the Griz would emerge from the nonconference schedule, most would agree that a 2-1 record with plenty of offensive output sounded about right.

After two lopsided wins with over 500 yards of total offense each and a heavy loss at No. 7 Washington, the Griz are right where most thought they would be.

But now comes the real test.

“This is what we’ve been waiting a long, long time for. We’ve been preparing for this. We talked about it every day in the offseason, spring ball, fall camp, and it’s here now. Now is the time to get it done,” said Montana head coach Bob Stitt.

THE GAME: The Grizzlies jump right into the deep end of Big Sky Conference play this week, hosting the No. 11 Eastern Washington Eagles in a rivalry matchup against the defending league champs.

The Eagles enter the game at 1-2, taking a pair of losses from the Big 12’s Texas Tech Red Raiders (56-10) and FCS powerhouse North Dakota State (40-13) before traveling to New York and defeating a shorthanded Fordham squad 56-21 last week.

It’s been a tale of feast or famine for both Montana and EWU in nonconference play, and now both teams will set out to prove how good they really are on Saturday.

Montana will be led into battle by redshirt freshman Gresch Jensen at quarterback, getting his first career start against one of the Big Sky’s best.

Kickoff against the Eagles is set for 6 p.m. at Washington-Grizzly Stadium. The Griz face EWU in only the eighth night game in stadium history at UM, with Montana holding a 6-1 all-time advantage under the lights.

Saturday’s game is also the annual pink game to support cancer awareness, sponsored by Providence Health and Services. Fans are encouraged to get decked out in pink to raise awareness for the fight against cancer.

The Montana GSA tailgate opens at 4 p.m. on Saturday, serving up beverages to pregame partiers for a good cause. Proceeds from the tailgate go directly to the Grizzly Scholarship Association, providing scholarships to student-athletes. The GSA tailgate is open to the public and is the official home of the pregame radio show featuring Denny Bedard and Scott Gurnsey.

WATCH: Saturday’s game against Eastern Washington kicks off ROOT Sports’ season of Big Sky football coverage. This year, a total of five Griz games will be broadcast in HD by ROOT Sports, including the remainder of UM’s home games and the Griz/Cat game.

ROOT Sports, a division of AT&T Sports Networks, is available nationwide on DirecTV channel 687, Dish Network channel 426, and locally on Charter Spectrum cable on channel 60, 122, and in HD on channel 560. Visit GoGriz.com to find a link to a ROOT Sports channel finder to see if the broadcast is available in your area.

The game will also air LIVE regionally on AT&T Rocky Mountain, AT&T Southwest, and the Audience Network. Check local listings to see if you can watch. No webstream is available for ROOT Sports games this year.

Veteran announcer Tom Glasgow will lead the play-by-play call against the Eagles, with support from analyst Jason Stiles and Jen Mueller on the sidelines.

The Griz/Eagles game will directly follow the Seattle Mariners/Cleveland Indians game in Seattle on ROOT Sports.

LISTEN: “Voice of the Griz” Riley Corcoran will have the radio call of Saturday’s game against the Eagles, supported by long-time color commentator Greg Sundberg in the booth. Fans can tune-in statewide on the Montana Grizzly Sports Network, or visit gogriz.com to listen to the audio-only web stream worldwide.

SERIES HISTORY: Montana leads the series with Eastern Washington 27-16-1 and is resoundingly successful in the series when played in Missoula at 16-5-1. Over the last 10 years, however, the Griz/Eagles series is tied 5-5 in regular season games, with EWU holding a 6-5 overall advantage thanks to a 2014 FCS Playoff contest in Cheney.

Montana head coach Bob Stitt is 1-1 against the Eagles after dismantling EWU 57-16 in his first year as head coach – the last time the rivals played in Missoula.

Jeremy Calhoun, then a true freshman, rushed for a career-high three touchdowns that day and the Grizzly defense added a pair of scores as well in the route at Washington-Grizzly Stadium. Herbert Gamboa returned an EWU fumble 33 yards for the first defensive score, and JR Nelson ran back an interception 36 yards for the other.

Also getting on the score sheet that day? Eagle freshman QB Gage Gubrud, who ran in a TD from one yard out for his first career touchdown late in the third quarter. It was just the second appearance of the future All-America QB’s career.

FIRST AND TEN WITH THE GRIZ

PHILLIPS INJURY: There was no hiding the fact that Grizzly starting quarterback Reese Phillipswent down with a severe injury in the second quarter against Savannah State, witnessed by over 22,000 in Washington-Grizzly Stadium. The redshirt senior transfer from Kentucky underwent surgery that night at St. Patrick’s Hospital in Missoula and released the following statement on Tuesday morning regarding his condition.

“First off, I’d like to thank all my teammates, coaches and the fans of Griz Nation who have reached out to me and treated me like family during this time. So you can hear it from me, I shattered my fibula, ruptured just about all the ligaments in my foot and dislocated my left foot all in one play. Pretty impressive, right?

“Being the QB for this team is truly the honor of a lifetime and simply a dream come true. Although I won’t be on the field playing, I’ll be at every game doing everything in my power to help my team continue to reach our goals. I look forward to communicating more with Griz Nation in the near future. Until then let’s pack WGS this Saturday and get after the Eagles! Go Griz!” – Reese Phillips

Defensive tackle David Shaw posted a sack and a pair of TFLs against the Tigers and has moved back into the starting role after being beat out by Brandt Davidson last week.

Toure was one of 12 Grizzlies to catch a pass last week against SSU, the most for UM in a single game since 2016’s win over Sac. State when 14 Griz caught a pass.

Also having his best day as a Grizzly las week was running back Alijah Lee who led a Montana rushing attack that racked up 193 total yards on the ground, the most for the UM offense since November 2016 at Northern Colorado.

Lee led the Griz with 10 carries for 74 yards and a pair of touchdowns. The Washington State transfer averaged 7.4 yards-per-carry and took off for a long run of 33 yards.

GRIZ IN THE POLLS: Just as it was expected that the Griz would enter conference play at 2-1, it was also expected that UM would remain on the outside of the national polls looking in until the start of conference play, barring a major upset of Washington or at the hands of Valpo or Savannah State.

The Griz have the perfect opportunity to break back into the polls against No. 11 Eastern Washington, while at 1-2, a loss to the Griz could see the Eagles fall out of the Top-25 altogether.

Offensively, Justin Calhoun is riding a similar streak for the Griz. The redshirt sophomore receiver is the only Grizzly to catch at least one pass in every game of his college career, dating back to his first game in2016 when he caught four passes for 42 yards and a touchdown against Saint Francis.

GRIZ QUICK HITS: Montana is the No. 2 team in the nation in red zone offense this week. The Griz have made 12 trips to the red zone and come up with scores on each one.

This week’s winners of defensive coordinator’s “production belts” – boxing-style belts that are presented to the top defensive producers for the Griz each week – were Buss and James Banks.

It’s the second time Banks has earned a production belt (the first after Valparaiso) this year. The senior from Oregon leads the Griz in total tackles with 27 so far this season (10 solo, 17 assisted). He’s posted double-digit tackles in both of Montana’s home games, 12 against Valpo and 10 against Savannah State.

FOUR DOWNS WITH THE EAGLES: The Eagles tallied the seventh-most offensive yards in school history with 650 total against Fordham last week. For his effort, Gage Gubrud was named the ROOT Sports Big Sky Offensive Player of the Week for the fourth time in his career. The McMinnville, Ore., native passed for 399 yards and three touchdowns and ran for two more.

The Eagle defense held Fordham to 217 yards of offense, with just 26 yards of net rushing. The Rams were without the services of three-time All-America running back Chase Edmonds

Aaron Best is in his first season as the Eagles head coach as a 20-year veteran of the program as both an assistant and player.

AROUND THE SKY: Conference play begins in earnest around the league, with 12 schools playing in six Big Sky contests, and no nonconference games on the schedule.

Montana fans will want to keep an eye on the Montana State at North Dakota game in Grand Forks. The Bobcats are coming off a bye week after giving No. 4 South Dakota State all they could handle in Bozeman two weeks ago. Meanwhile, the No. 17 Fighting Hawks, who were picked to win the Big Sky, are limping along with injury coming off a 45-7 loss at the, now, No. 13 South Dakota Coyotes in Vermillion, S.D.

Also of note is the UC Davis at Weber State game in Ogden, Utah. UC Davis has been resurgent this season at 2-1 under first-year head coach Dan Hawkins. The Aggies dismantled Portland State 37-14 last weekend in Portland. PSU had been on the cusp of knocking off two FBS powers earlier this year, falling to BYU 20-6 and Oregon State 35-32 before falling to UC Davis. Weber State has been consistently strong this season, climbing to No. 23 in the STATS FCS media poll and No. 18 in the coaches’ poll at 2-1.

UP NEXT: Montana faces its first Big Sky road test at Portland State on Sept. 30. The Griz then travel to Idaho State the week after, who won on the road in Reno against Nevada 30-28.