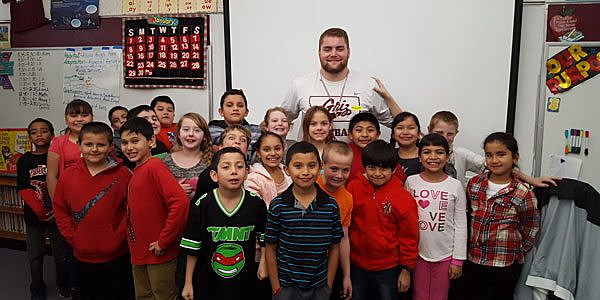 What started with a simple pen pal exchange with a group of kids in California has blossomed into the trip of a lifetime that could inspire a new generation of college-bound students.

This coming Friday, a group of 19 fourth- and fifth-graders, and eight chaperones from Gerber Elementary in Gerber, Calif., will board a bus and hit the road for Portland, Ore., to see their friend and starting center for the Montana Grizzlies Cooper Sprunk play at Portland State on Saturday.

Thanks to a fundraising drive started by Missoula’s Sentinel Kiwanis Club and the generosity of the Missoula and Montana community, Sprunk’s pen pals will travel to Portland for a trip that’s about more than seeing a football game. This trip is about exposing the kids to a world of possibilities outside of the Sacramento Valley.

And for Sprunk, he couldn’t be more excited to see his friends.

“I’m pumped. I can’t believe it’s actually going to happen, it’s been such a long time coming. It’s super exciting that they raised all the money,” said Sprunk. “Those kids are just old friends at this point. It will be awesome to see them all, and make that connection even stronger.”

In addition to seeing Sprunk and the Griz play on Saturday, the busload of kids will get a guided tour of Nike headquarters courtesy of Sprunk’s dad Eric, an executive with the sports apparel giant.

Aside from a football game and a tour of Nike, the kids from Gerber Elementary will also receive a guided tour of Portland State University, and therein lies the real purpose of the trip.

“That tour means a lot. I hope it gets them excited about, not just college, but going to high school,” said Sprunk. “A lot of them aren’t pressured by their parents to go to school, so just seeing there are other options to stay in school will be awesome for them.”

“It’s been a whirlwind, but I’m just so excited it’s actually going to happen,” said Keri Spengler, the teacher of Sprunk’s pen pal class. “It’s going to be amazing for the kids to be in Portland and experience it.”

“My hope is, even if one kid comes away from this trip knowing there is a bigger world out there, and if I put my mind to it I can go to college and be like Cooper too, would make it all worthwhile,” she added.

As a No Excuses University school, Gerber’s mission is to give underprivileged kids the knowledge that they too have the ability to finish school and go on to pursue their dreams in college.

NEU schools adopt a university as a part of the curriculum. In return, a representative from the university adopts a class to promote the idea that anyone can obtain a college education.

Gerber was inspired to adopt Montana as its university of choice through a connection with former UM football player Eric Dawald, a longtime family friend of the Sprunks.

After reading about Sprunk’s pen pal friendship with the kids at Gerber, and how he took his own time and money to fly to California and meet them during UM’s holiday break in January, Michele Wheeler of Sentinel Kiwanis became inspired to help take it to the next level.

Over the summer Wheeler and Sentinel Kiwanis set out to raise enough funds to bus the kids from Gerber to the closest Griz game of the season, this year played in Portland, a seven-hour drive north on I-5.

Thanks to the help of several different organizations, businesses, and the kindness of strangers, the fundraiser was a resounding success, pulling together nearly $8,000 and enough contributions to make the trip a reality.

“The outpouring we’ve received from the Kiwanis family, the Missoula community, Griz Nation, and the Gerber community has been overwhelming,” said Wheeler. “As a Kiwanian, I’ve never been prouder or more moved by the power of the human spirit. It’s been absolutely amazing how we have seen hearts come together for these kids.”

“I don’t know 70 percent of the people who have donated to this project. So, it’s beyond Kiwanis, but the Kiwanis spirit has shown through.”

Just looking at the itinerary, you get a feeling for how many people and organizations came together to make the project a reality.

The bus departs Gerber at 7 a.m. on Friday. Lunch for the kids will be provided by the Red Bluff Kiwanis Club out of nearby Red Bluff, Calif. The No Excuses University organization also chipped in and will provide road snacks for the group as they work their way north.

Upon arrival in Portland, the group will tour Portland State to learn more about college life before heading to their accommodation for the evening.

Sentinel Kiwanis has lined up pizza and a place to stay at the French International School, which provides beds, showers, playgrounds and even a projection screen so the group can watch movies.

After taking a tour of Nike HQ in the morning, the group will arrive early to Hillsboro Stadium where they will be treated to a pregame tailgate party courtesy of the M Store in Missoula who donated snacks and matching Griz t-shirts for the kids to wear.

After the game, the group will meet with Sprunk and the rest of the Grizzlies on the field at Hillsboro stadium, where over a year of friendship will be rekindled face to face.

“I feel like I could have a hundred pen pals and it would never be like it has if it weren’t for Cooper,” said a grateful Spengler. “I feel like God lined him up to meet with us and then he put Michelle in our path to make this whole thing come together. It’s definitely been a blessing.”