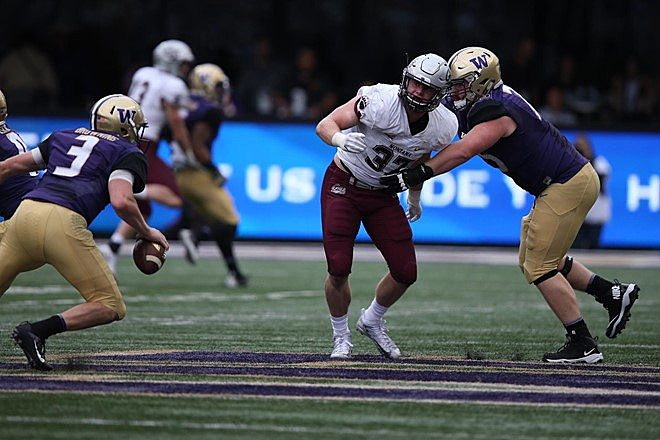 It was no secret the Montana Grizzlies were in for a fight when they took the field against the Pac-12 powerhouse Washington Huskies in Seattle on Saturday.

While the 63-7 score line may look bad on paper, the Griz showed they were able to compete with arguably one of the best college football teams in the nation, who moved up to No. 6 in the AP Top-25 poll Sunday afternoon.

Case in point: in the first half, Montana found itself in a rhythm, putting together drives of 9 and 15 plays for 40 yards each and converting 3-of-5 fourth downs against the power-five team that many selected to repeat as Pac-12 champions and return to the college football playoff.

Defensively, Montana can also hang its hat on a 36-yard pick-six from Josh Sandry (quickly becoming the sophomore’s signature play), and five tackles-for-loss, among other highlights. Tucker Schye – himself responsible for a pair of TFLs – put a big play on tape for the defense just three plays into the game, stuffing Husky receiver Chico McClatcher for a loss of six yards.

When the team met Sunday evening to watch the game as a group for the first time, head coach Bob Stitt didn’t focus on the score, but rather on the several positives he found on film.

“We were actually playing pretty good football on both sides of the ball,” said Stitt after rewatching the game Sunday morning.

“Nobody wants to lose, but we feel like we got something out of this game. We’ve got to look at the individual play, and the coaches are going to be pretty happy about it, and so are the players.”

Senior quarterback Reese Phillips made his second career start in Seattle, and was already looking forward to watching the tape after the game Saturday night.

“There’s so much we can take away from this game. It’ll be so much easier once we watch the film but there were so many moments where we were moving the ball, with I won’t say ease, but we were doing what we were coached to do,” said Phillips in the post-game press conference. “When we get deeper into the season, this is a game we can look back on. We aren’t going to be nervous in any more games because we just played a playoff caliber team and they are the real deal.”

As the Griz prepare for Big Sky play on Sept. 23, perhaps the biggest positive from Saturday’s game in Seattle is that UM came out relatively unscathed on the injury front, with Stitt alluding to not much more than your typical “bumps and bruises” after going toe-to-toe with the ranked Huskies.

The Grizzlies fell to 1-17-1 all-time against Washington in the series that dates back to 1920. UM will get another crack at the Huskies in 2021, when the Griz travel back to Seattle to open the season on Sept. 4.

Montana now turns its attention to taking the lessons learned from the Washington film and applying them toward a clean performance against Savannah State (0-1) of the Mid-Eastern Athletic Conference (MEAC), who come to Missoula this coming Saturday, Sept. 16, from Savannah, Georgia.

The Tigers opened their season on Saturday, also playing up against an FBS opponent at Appalachian State, falling 54-7. Like the Griz against UW, Savannah State’s only touchdown came on from their defense when Stephen Dorsey returned a Mountaineer fumble 45 yards in the fourth quarter to avoid the shutout.

Tacoma, Wash., native and senior offensive lineman Robert Luke was one of three game day captains on Saturday, getting the chance to lead the team in his hometown. Also earning the captaincy were Phillips and senior safety Justin Strong, who played against the Huskies back in 2014 when he was a freshman at Oregon State.

Strong looked right at home against a Pac-12 opponent on Saturday, leading the Grizzles with nine tackles (six solo) and a half of a tackle-for-loss.

Senior Korey Alexander made it two-for-two this season as Montana’s coin-toss captain, winning the flip against UW and following through on coach’s orders to defer until the second half. Alexander won the job of calling the toss for the Griz this season following a loser out team competition during fall camp where he was the last man standing.

PLAYER OF THE WEEK NOMINEES

We’ve already made note of Strong’s team-high performance with nine tackles as well as Josh Sandry‘s pick-six for a touchdown, both of which earned the two standouts this week’s defensive award.

The “production belts” are two boxing-style belts that double as traveling trophies, awarded to the top defensive stars for the Griz each week.