The Montana Grizzlies will renew a century-old football rivalry with the University of Idaho beginning in 2018 when the Vandals become full members of the Big Sky Conference for the first time since 1995.

The Big Sky recently finalized the process of integrating the Vandals into its 2018 and 2019 football schedules after UI accepted an invitation to move its football program back into the league on April 28, 2016.

With its return, Idaho will replace Eastern Washington as one of the Grizzlies’ two protected rivals, ensuring the schools will play each other every season on a rotating home-and-home basis.

Montana is the current holder of the “Little Brown Stein”, a traveling rival trophy awarded to the winner of the Montana/Idaho contest. 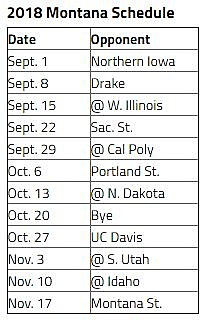 “I have heard from so many Griz fans about the intensity of the Grizzly-Vandals matchups on the football field. It is great to have the University of Idaho back on the schedule,” said Montana director of athletics Kent Haslam. “I know our fans will be excited to rekindle the football rivalry between these two great universities.”

The Grizzlies are 27-55-2 all-time against their rivals to the west. In games played in Moscow, the Griz are 11-29-2, and 15-25 in Missoula dating back to 1915. However, since Washington-Grizzly opened in 1986, the Griz have the upper hand with a 5-3 record over the Vandals and are currently riding a four-game win streak over UI as an FBS team. Montana is also 1-1 against UI when playing at a neutral location. 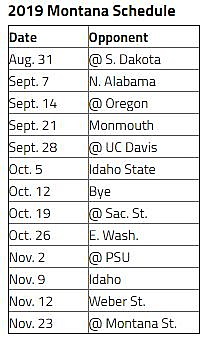 The last time Montana played Idaho was in 2003 at Washington-Grizzly Stadium when the Griz came away 41-28 winners. Now a coach at UM, then-running back Justin Green rushed for a game-high 122 yards and a touchdown, while the UM offense totaled 344 yards and five rushing TDs.

With the addition of the Big Sky slate of games, Montana’s 2018 and 2019 season schedules are now complete.

Montana opens the 2018 season against FCS powerhouse Northern Iowa in Missoula on Sept. 1, before hosting Drake on Sept. 8. The Griz wrap up the nonconference schedule in Macomb, Ill., against Western Illinois.

In 2019, the Griz will play a four-game nonconference schedule thanks to an extra Saturday on the calendar that falls between the NCAA-allowed dates. UM opens at South Dakota that year, before returning home to host North Alabama. Montana then takes on the Pac-12’s Oregon Ducks in Eugene before wrapping up the nonconference schedule against Monmouth in Missoula.

The Griz travel to UC Davis to open the league schedule, and also make trips to Sacramento State, Portland State, and Montana State. Home games for the Griz that year include Idaho State, Eastern Washington, Idaho, and Weber State.