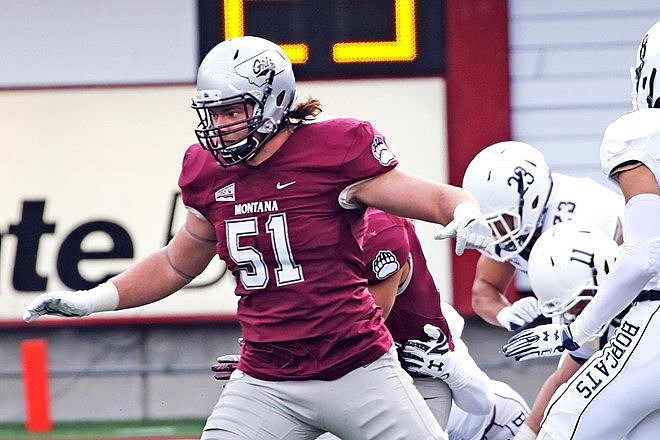 And for good reason. At 340 pounds, preseason All-America defensive tackle Vita Vea is about as inconspicuous as a bulldozer at the ballet.

But in the post-game analysis, one of the groups that graded out best for the Griz was the offensive line, who took on a D-line laden with NFL prospects like Vea (a rumored first-rounder) and Greg Gaines and turned heads with a strong performance.

A year ago, Montana’s offensive line struggled at times during UM’s 6-5 season. But with a core group of seniors leading the way in four of the five positions in 2017, the Grizzly front is bringing that DOLA attitude back to Washington-Grizzly Stadium.

“The longer you’re in it, you’re either going to get better, or you’re going to get worse. I feel like all these guys have improved steadily in the time that I’ve been here and I really think the confidence level is growing and getting to where we need it,” said veteran O-line coach Chad Germer.

With Big Sky play right around the corner, Germer thinks his group might be hitting its stride at just the right time, passing a test against the best in Seattle, coming out injury free, and preparing to make a run toward the FCS playoffs.

“I think the game was good for us. Getting used to playing that caliber of competition is a good thing.” Germer added. “Preparing for UW, watching the speed of that film and studying that style of play will be great for us as we move forward.”

When Montana takes the field on Saturday against the visiting Savannah State Tigers, the Grizzlies’ O-line will be the most experienced group on the field with a combined 79 starts to their name. Fifteen of those starts come from senior guard Robert Luke, who both Stitt and Germer pointed to as being a standout in the battle with the Husky big men.

Luke’s journey to a leading role for the Griz has been a long one. The three-time Academic All-Big Sky player was thrust into action as a true freshman in 2014, playing in 10 games as injury cover for the Griz.

He found early success that year as well, earning Montana’s nomination for Big Sky Special Teams Player of the Week when he blocked a fourth-quarter field goal attempt that would have won the game for North Dakota on the road in Grand Forks.

He proceeded to start all 13 games for the Griz in 2015 as a sophomore at center before finding a role as a versatile backup his junior year. Now as a senior, his 34 career appearances worth of experience are paying off, as evidenced by his game in Washington.

“He’s got more and more confidence every time he goes out there and straps it on. I think he played with a lot of confidence in a big-time environment against a really good front, and I thought he really responded well,” said Germer.

The game against the Huskies was a homecoming of sorts for Luke, who hails from just down I-5 in Tacoma.

Not only was Luke familiar with his surroundings on the shores of Lake Washington, he was familiar with the culture of his opponents as well, adding to his comfort level on the big stage, which he says will pay off come Big Sky Conference play.

The Polynesian Football Hall of Fame has Vea on its watch list for the 2017 Polynesian College Player of the Year, an award that has previously gone to college stars like Heisman winner Marcus Mariota and Sefo Liufau.

“They’re a great D-line. I have a lot of respect for them, and they played really well. We fought our butts off, and I think the better player you go against, the better it will prepare you for someone else,” Luke added.

But comfort with your opponents can only get you so far in a game against the seventh-ranked team in the nation. Luke credits a change in the mental approach to the game at UW for the offensive line’s improvement against the Huskies.

“We didn’t look at the scoreboard, every play we gave our all, all the way to the very end we gave 100 percent effort. We didn’t panic or anything,” said Luke. “What’s really important is that people took the stand, didn’t care about what anyone else was doing and just did their job.”

At Washington, senior journeyman Mike Ralston made only his second-ever start on the offensive line at right tackle having played in four different positions during his college career. The Oregon native and two-time Academic All-Big Sky performer has moved from tight end to defensive end, to wide receiver before finding a home on the O-line. And while he knows there is always room for improvement, the credits the tightness of the group as one of its major strengths.

“I think we’ve done well so far. Obviously, every game we’ve got stuff to improve on so it’s been enlightening to turn on the film,” said Ralston. “We’ve got a good relationship with each other, and I think carrying that into each game we’re going to get better and better.”

Montana takes on Savannah State Saturday before turning its full attention to rival Eastern Washington who pays a visit to Missoula on Sept. 23 to open league play.

When the Griz face the Tigers this weekend, they will be led into battle by Ralston and Cooper Sprunk, two offensive linemen that will serve as game day captains, and will take the lessons learned from playing up and put them toward starting a winning run in the Big Sky.

“I think it’s good knowing that’s probably the best unit we’re going to face, and if we can take that good momentum we had against them into the next few games we’ll be doing well,” Ralston added.