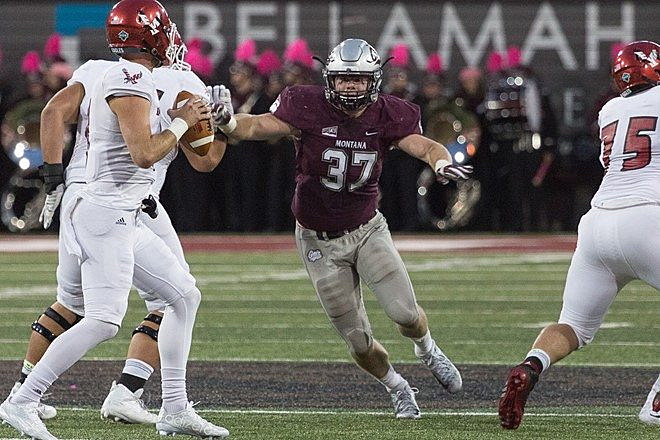 The Montana Grizzlies continue Big Sky Conference play this week, traveling to Portland State in the team’s first road game of the league season, looking to right the ship after a tough loss to rival Eastern Washington.

Against the Eagles – who moved up to No. 9 in the national polls this week – Montana put up over 500 yards of total offense led by freshman QB Gresch Jensen‘s 358 yards of passing.

Both Jensen and Schye will be called on once again to lead the Griz against a Viking team that was on the cusp of upsetting a pair of FBS teams to start the season.

“They played BYU very well, and they should have beat Oregon State,” said Montana head coach Bob Stitt. “They’re a good team, and they went toe-to-toe with a couple FBS programs. We’re definitely going to have our hands full. They’re loaded with a lot of talent.”

THE GAME: The Griz (2-2, 0-1 BSC) travel down the Columbia River to Portland, Ore., to face the Portland State Vikings (0-3, 0-0 BSC) for the first time since 2015, and for only the fourth time since 2011 due to an unbalanced Big Sky schedule. Both teams will be looking for their first conference win of the year when the two meet on Saturday, Sept. 30, in Rip City.

The UM/PSU game was moved to Hillsboro Stadium (7,600) due to scheduling conflicts with the Portland Thorns soccer team at Providence Park, the usual home of Portland State football. Kickoff is set for 2 p.m. (PT), 3 p.m. (MT).

TAILGATE IN PORTLAND: The Grizzly Scholarship Association is hosting a tailgate party for Griz fans in Portland for Saturday’s game. Admission is free, with proceeds from food and beverage sales going to support scholarships for student-athletes.

The GSA tailgate will take place at Ron Tonkin Field, home of the Hillsboro Hops minor league baseball team, located right next to Hillsboro Stadium. The party starts two hours before kickoff at noon, and runs until 2 p.m. Entrance to the party is located along the right-field fence. Keep an eye out for the Griz flag flying high.

If you live outside the state, the game will be available on in select markets on the Altitude Sports Network, or you can watch worldwide for free via web stream at WatchBigSky.com or via the Pluto TV app on any over the top device such as Apple TV or Roku. For more details visit the “Where to Watch” page on GoGriz.com. Check local listings to find the ABC/SWX Montana channel in your area.

LISTEN: “Voice of the Griz” Riley Corcoran will have the call of Saturday’s game in Portland, supported by long-time color commentator Greg Sundberg in the booth. Fans can tune-in statewide to hear the call on the Montana Grizzly Sports Network, or visit gogriz.com to listen to the audio-only web stream worldwide.

SERIES HISTORY: The Griz lead the all-time series with Portland State 29-12, and are 12-9 in Portland dating back to the first meeting between the two in 1965. Since the Vikings joined the Big Sky Conference in 1996, the Griz hold a commanding 15-3 lead in the series.

LAST MEETING: While Montana holds a comfortable lead over the Vikings in the all-time series, the Griz travel to PSU with redemption on their minds and dreams of a sunny day in the Pacific Northwest.

The Griz last faced the Vikings on Halloween weekend, 2015, in a torrential rainstorm that soaked players, coaches, and fans alike down to the bone.

Then-quarterback Makena Simis made the second start of his UM career, filling in for the injured Brady Gustafson and Chad Chalich. After tying a school record for touchdown passes in a game the week previous, Simis was tasked with going against a Viking defense led by future professionals Xavier Coleman and Patrick Onwuasor in the driving rain, throwing three interceptions.

Meanwhile, the PSU offense was right a home in the storm and rushed for over 300 yards in the 35-16 win for the Vikings.

LET’S PLAY TWO! Montana’s game at PSU is the first in a two-game road stretch for the Griz that both hold important Big Sky implications. After facing Portland State on Sept. 30, the Griz then head to Pocatello, Idaho, to face the upstart Idaho State Bengals, who defeated the Mountain West’s Nevada Wolfpack 30-28 two weeks ago in Reno.

With three of the Grizzlies’ last five games coming at home, the next two weeks of Big Sky play on the road will be key to UM’s playoff hopes down the line.

OFFENSE IS CLICKING: The Grizzlies have scored an average of 47 points in their first three games against FCS opponents this season, landing them at the top of several Big Sky stats categories.

After four games, UM is ranked No. 1 in total offense in the Big Sky, averaging 450 yards-per-game and racking up exactly 1800 yards on the season.

Despite a change in quarterback, Montana’s passing game is ranked No. 9 in the nation with an average of 314.3 YPG and No. 10 in the FCS in offensive first downs with a total of 88 (the most in the Big Sky).

The two quarterbacks responsible for that output (Jensen and Reese Phillips before him), sit at No. 5 and No. 6 in the league in terms of pass efficiency with a 144 and 148.7 rating, respectively.

Jensen – the first UM quarterback to see time as a freshman since Jordan Johnson in 2010 – attempted 51 passes against EWU, the second most passes in the Big Sky this season. The most passes in a game? Gage Gubrud’s 65 attempts versus the Griz last week.

SPLITTING THE UPRIGHTS: Brandon Purdy is one of five players in the Big Sky to remain at 100 percent on the season kicking PATs, but with 20 attempts the Kalispell native has split the posts more than anyone else in the league.

Purdy also set a new career-long last week with a 39-yard field goal in the third quarter. He’s now three-for-three on field goals this season with one make from 39 yards and two from 24 yards.

RED ZONE SUCCESS: The Griz remained perfect in the red zone this week with 16 scores in 16 visits inside the opponents 20 with 14 touchdowns and two field goals.

Montana is one of only five teams nationally at 100 percent in the red zone, but those 16 scores are the most of any other FCS team. Two teams in the Big Sky are perfect from the Red Zone, Montana, and Northern Colorado. The Bears, by comparison, only have six appearances to UM’s 16.

DEFENSIVE STARS: Schye’s honorable mention for national Player of the Week wasn’t a fluke. The senior from Malta leads the conference in tackles-for-loss with 7.5 on the year and is tied at No. 3 in the Big Sky in sacks with 4. Nationally, Schye sits at No. 10 in sacks and No. 14 in TFLs. His three sacks and four TFLs against EWU were both career highs.

As a team, Montana has the most TFLs in FCS football with 38.

Josh Buss had another excellent outing against EWU, notching a career-high 17 tackles, a sack, and 2.5 TFLs. The junior from Boise has the sixth-most tackles in the Big Sky this season with 39, averaging 9.8 takedowns per contest.

Montana’s leader in tackling, however, goes to James Banks who, with 41, has the second most in the league. Banks also set a career-high in tackles against the Eagles with 14.

YOUTH MOVEMENT: Despite a strong upperclassmen presence on the offensive and defensive lines, the Griz are spreading the majority of reps to underclassmen across the board.

GRIZ IN THE POLLS: Montana missed a chance to break into the national polls this week against Eastern Washington, currently sitting just outside the polls with 38 votes in the STATS FCS media poll and six votes in the FCS Coaches Poll.

With a 41-point, 500-plus-yard outing against the top-10 Eagles, the Griz may be the best 2-2 team in the country not currently ranked.

GRIZ QUICK HITS: Gage Gubrud threw for 549 yards and four TDs against the Griz on Saturday. The last player to do that? Gage Gubrud in 2016. Nic Sblendorio and Nsimba Webster each caught passes for 100-plus yards last week. The last two receivers to do that against UM? Future professionals Cooper Kupp and Kendrick Bourne for EWU in 2016 as well.

Passing performances like that against Montana are rare, however. Last time an opponent passed for more than 400 yards against the Griz was way back in 2012 when North Dakota’s Braden Hanson threw for 660 in Grand Forks.

BIG PICTURE: Not to say Montana’s loss to EWU didn’t sting (It did), but in the history of Washington-Grizzly Stadium, losses have been a rarity. In fact, it was only the 30th loss for UM in the history of the stadium dating back to 1986, and only the 130th overall loss for the Griz in Big Sky Conference history.

PLAYS ON PLAYS: Montana and Eastern Washington each ran 96 plays from scrimmage last week. For the Griz, that 96 is just three plays shy of tying the school record of 99 plays in a game set at South Dakota State in 1970.

FOUR DOWNS WITH THE VIKINGS

Portland State is also a young squad with 11 true freshmen playing a role on the active roster so far this season. PSU has played 26 underclassmen in total.

The Vikings have three backs that are averaging around 50 yards rushing per game in Za’Quan Summer (58), Jalani Eason (55.3) and Jason Talley (46). PSU is outrushing its opponents so far this season 208-166 yards on the ground.

Eason is also Portland State’s leading passer. The dual-threat freshman QB from Los Angeles has thrown for five touchdowns and 397 after three games.

Defensively, PSU’s leading tackler is Artuz Manning with 26 tackles. The Vikings have seven defenders with a double-digit tackling total.