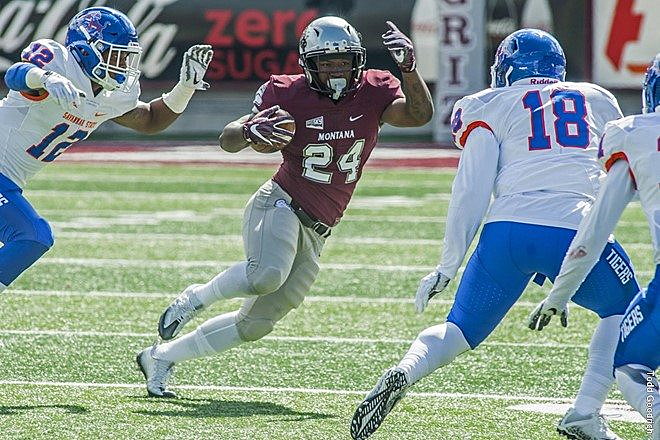 Montana put together a complete performance in all three phases of the game on Saturday, scoring eight touchdowns and keeping Savannah State out of the end zone in a 56-3 victory over the visiting Tigers.

Quarterback Reese Phillips completed his first 13 passes for 148 yards and Alijah Lee scored the first two touchdowns of his career to give the Grizzlies an early 14-0 advantage. However, the game took a turn early in the second quarter when Phillips went down with a leg injury and had to be carted off the field.

“I thought it was a great day of football,” head coach Bob Stitt said. “It’s hard to think about what we did when we had one of our players go down like Reese did – especially knowing his story and how hard he’s worked and how well he’s been playing – but I’m proud of our players and how they lined back up and got a really good win.”

The Grizzlies didn’t skip a beat. In came redshirt freshman Gresch Jensen, who on the next series rushed for his first career touchdown. The score was set up by the defense and special teams, with the D forcing a three-and-out – all three plays resulted in lost yardage – and Jerry Louie-McGee taking the ensuing punt 41 yards to the Tigers 12-yard line.

The defense wasn’t done, though. Just three plays after Jensen’s touchdown, Ryan McKinleyintercepted TJ Bell’s pass and returned it 53 yards for a touchdown. It was UM’s second game in a row with a pick six.

The Griz defense totaled eight sacks, 15 tackles for loss and two interceptions – the other being by Josh Buss in the first quarter. In addition to the interception, Buss finished with 3.5 tackles for loss, two sacks, and eight tackles, despite not playing for the majority of the second half.

Unexpectedly forced into action, Jensen was phenomenal, completing 11 of 15 passes for 178 yards and three touchdowns, in addition to his rushing score.

“As far as mentally, it’s the same stuff,” Jensen said about going in mid-game. “Just trying to execute and move the offense and try to have fun.”

His coach also spoke highly of him: “I’ve never had a quarterback that’s more prepared every single day, every single week, even though he wasn’t the starting quarterback. He’s in the film room late at night. He knows how to attack the defense. That’s why he could go into that situation today, and that’s a special thing.”

The blowout allowed for several Griz players to make their collegiate debuts or see extended action, including Caleb Hill – who entered the day as the No. 3 quarterback and finished 4-of-6 for 42 yards.

“We’ve got a lot of really good players on this team, and that’s what you want in a game like this, is to play quality football, but then when you put your backups in they play great football as well,” Stitt said. “We felt like every unit we went to – we got to some 3s and 4s – they’re all doing their jobs, and that was really fun to see.”

Overall, the Grizzlies more than doubled the Tigers’ total yardage (561 to 254), despite running fewer plays and holding the ball for 11:32 less. The offense totaled 26 first downs and was a perfect 7-for-7 in the red zone.

As good as the offense was, though, the defense deserves plenty of credit for limiting Savannah State to three points – coming on a field goal on the final play of the first half.

The Tigers reached the red zone on their first two drives of the game but came away empty-handed both times. On their first drive, Buss intercepted Bell’s pass at the 6-yard line, resulting in a UM touchdown six plays later. On the Tigers’ second drive, they reached the 8-yard line, only to have a 25-yard field goal blocked by Josh Sandry.

“I was really impressed with our defense,” Stitt said. “We’re giving up some yards, but we’re going to tighten up the screws on you in the red zone and not give up big plays.”

Two other times, Savannah State was in field-goal range before sacks pushed them out and forced them into punting situations. The second instance happened in the third quarter when Savannah State reached the 13-yard line before a Randy Rodriguez 14-yard sack on third down. The Tigers’ punt was downed at the 1-yard line, but on the first play, Jensen completed a bubble pass to Toure, who ran 80 yards to the Savannah State 19-yard line. UM completed the 99-yard drive three plays later with Curran’s second touchdown of the half. The final score came early in the fourth quarter when Treshawn Favors found the end zone for the first time in his career.

The dominant victory improves the Grizzlies to 2-1 on the year, including 2-0 at home, where they’ll take on Eastern Washington next Saturday at 6 p.m. MT. The Eagles shared conference title in 2016 and were picked to finish second in the 2017 preseason poll.

SPLIT-THE-POT: A winner has not come forward yet for Saturday’s Split-the-Pot drawing. The winning ticket was orange, number 656469 totaling approximately $7,238.