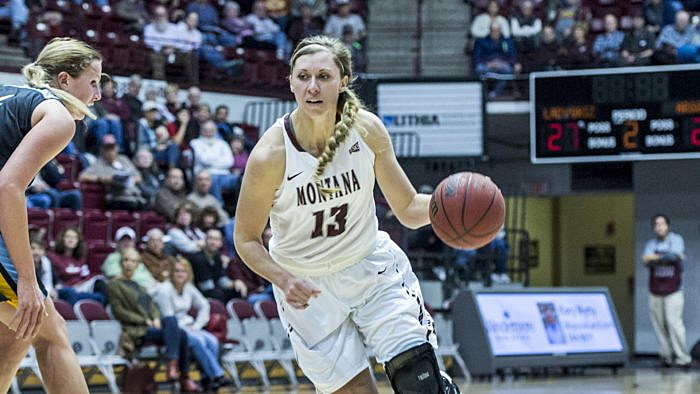 For Alycia (Sims) Harris, the spirit was always willing. In the end it was her body, or more specifically her battered left knee, she couldn’t overcome.

The 6-foot-2 forward, who would have been a fifth-year senior this winter for the Lady Griz, stepped away from the game for good last week, no longer able to play through increasing levels of pain.

Harris suffered a season-ending knee injury last November, but it was her other knee, the one she first injured as a freshman in high school, that led to the decision after a scrimmage last week.

“I haven’t been able to play hard or play to the level I want because of the pain. I remember going to cut to go get a rebound and feeling sharp pains and almost stopping,” she said. “It’s not fair to me or the team if I can’t go out there and play hard.

“I’m incredibly competitive and also pretty hard on myself. I want to be able to perform to the highest level I can for the team. Emotionally it was draining me, knowing I was pushing myself to go out there but not performing anywhere near where I know I can.”

It marks the end of a long journey for Harris, who rarely played pain-free since her days at Stevensville High.

Even so, she didn’t miss a single game during her Lady Griz career, playing 99 straight, from her seven-point, 10-rebound debut in November 2013 to the moment when last year was cut short.

“She is truly one of the toughest competitors we’ve ever had,” said coach Shannon Schweyen. “When I think of Lady Griz who have played in pain throughout their careers, she’s right up at the top. We’re going to miss her a ton.”

Harris had her first knee injury as a freshman in high school. She tore her left ACL “and about everything else,” she said.

“I didn’t know anything about knees. I thought I could tough it out and go back out and play. I lasted another 10 seconds and went down again, which didn’t help. I ended up doing quite a bit of damage.”

Following surgery and rehab, her knee was mostly fine until her junior year at SHS. But it’s been troublesome ever since, the pain always there, always nagging, always slightly holding her back.

She arrived at Montana damaged, but no one would have known if it hadn’t been for the sleeve she at times wore over her knee. She was a key reserve on Montana’s WNIT team as a freshman in 2013-14 and its NCAA team as a sophomore in 2014-15.

It was her junior year when she made the jump from contributor to mainstay, a player who at times was simply dominant. She averaged 9.8 points and 9.3 rebounds per game that season, with eight double-doubles.

She was never better than an early-February weekend in 2016 when she put up 17 points and 16 rebounds on Sacramento State, then two days later had 29 points on 13-of-17 shooting and 15 boards against Portland State to earn Big Sky Player of the Week honors.

It was never flashy, more workmanlike. Jumpers from the elbow within the offense. Rebound putbacks when she just outhustled everyone else to the ball. She rarely stood out, until you saw her final numbers. That was the true beauty of her performances.

Everything, then, was set up for last season. A new coach. Kayleigh Valley coming off a record-breaking season. And Sims, hurting, but as reliable as the arrival of winter.

Then everything went wrong. Valley was lost for the season the first week of practice. And just as Montana was getting used to a new normal — Sims leading a group of inexperienced players — she went down in the team’s first game. This time it was her right ACL.

Everyone knew Valley would be determined to get back for this season. After all, it was her first setback. Sims was more of a question mark. Because how much could one person endure? Now she had a pair of damaged knees to worry about?

“When I had surgery on my right knee (last winter), they went in and I had quite a bit of arthritic tissue and bone chips and multiple things that needed to be cleaned up in my old knee, as I call it,” said Sims, who has also had meniscus damage to that knee over the years.

Still, no matter the size of the obstacle before her, she made the decision to return.

This isn’t a story about the knee she injured last season. The rehab for that knee went well, and Harris has few issues with it. As it has been for years, it was that old knee, the bane of all things hoped for.

“I had an MRI two months ago, and the arthritis had completely taken off. (The doctor) described it as severe arthritic condition. It had aged decades in the last few months. Bone bruises were developing, and then there were all the issues that come along with arthritis,” said Harris.

None of us would want to try to live a non-athletic life with a knee in that condition. Sims was attempting to play Division I basketball. Until she no longer could.

There was hope early on that she could do what her coach, who had a bum shoulder, did her senior back in the early 90s: sit out most practices, save everything for the games, even if the minutes would be limited. Harris was going to be that valuable to team this season.

“She is a tremendously hard worker. She did everything she could to get her body in the best physical condition it could be in,” said Schweyen. “We knew what she could give us would be limited, but we were hopeful.”

Was it worth it? To feel those brief moments of hope, when her knee gave her a short reprieve from the worst of the pain, only to have other times when it returned, somehow more unforgiving than ever?

Harris believes so. Because the torment that would have hung on for life had she not tried would have been even worse.

“If I would have hung them up without giving this an opportunity, I would have regretted it,” she said. “I feel very confident in my decision. It’s the right one for me and my long-term health.

“It wasn’t an easy decision. It’s bittersweet, with a whole lot of bitter right now. But the right decision isn’t always the easy choice. I’ll look back and know I did everything I could.”

After going through a 7-23 season last winter, Montana, with Valley and Harris returning, was positioned just weeks ago for a return to glory.

But just days before she was going to be announced as the Big Sky Conference preseason MVP, Valley did it again, to the same knee. Her season was over before it had a chance to get started.

Three days later, following a morning scrimmage, Harris made the decision to put an end to her own comeback attempt.

“I wasn’t afraid of another injury. I know injuries are part of it. What (Valley’s injury) did make me do was take a step back and really look at the toll that this has been taking on me physically and emotionally,” she said.

“Telling Shannon and the girls was really hard, but it was a huge relief for me. It immediately lifted so much weight off my shoulders. It was emotionally taxing, going back and forth every day, not knowing if I could do it, then finally making that decision and coming to a resolution.”

And so she’ll head off into the sunset, but not really going anywhere. She graduated in May with degrees in both psychology and health and human performance, and she got married last summer.

She has started a master’s program in public administration, and the Harrises have purchased land in Stevensville and are starting to build a house.

It’s tempting to think it might be the competition she’ll miss most, or running out of the locker room and onto the floor of Dahlberg Arena as the cheers of a devoted fan base wash over her. Or the pursuit of more championships. Important for sure, all of it.

But what’s most important is something she is not going to have to go without at all.

“I’m really close with (teammate Jace Henderson). She has a family with some little girls who she’s close with. She let them know I was no longer going to be playing, and one of them said, ‘I’m really sad, but I’m really happy you’re going to be healthy. But most important I’m happy that you and Jace are still going to be best friends,’ Harris said.

“That hit home for me. It reminded me that this experience has been so much more than just basketball. Those friendships and relationships are what are going to stick with me forever.”