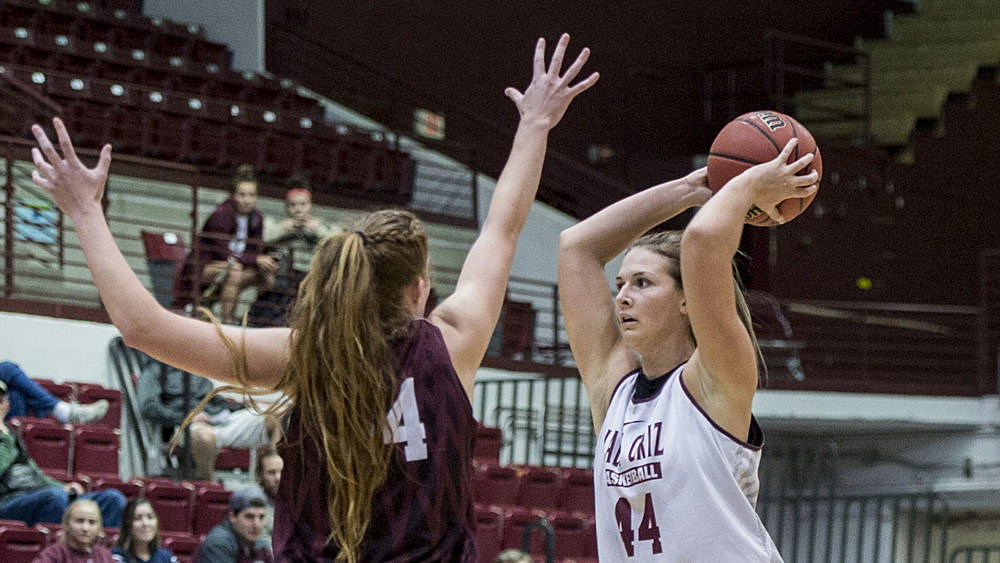 The Montana women’s basketball team will play the first of its two preseason exhibition games on Monday when it hosts Carroll at Dahlberg Arena. The Lady Griz and Saints will tip off at 7 p.m.

Coverage: The game will air locally on KGVO AM 1290/FM 98.3, with Tom Stage and Dick Slater calling the action, and carried on Pluto TV (channel 237) and WatchBigSky.com.

Opening tips: Montana is in year No. 2 under coach Shannon Schweyen. … The Lady Griz went 7-23 last year and finished 11th out of 12 teams in the Big Sky Conference at 4-14 in league. … Montana returns five starters in 2017-18 but lost expected starters Kayleigh Valley and Alycia Sims for the season earlier this month with knee injuries. … Valley was voted the Big Sky Conference Preseason MVP earlier this month for the second consecutive season. … In voting that was done with the assumption that the Lady Griz would be at full strength, Montana was picked third in the Big Sky preseason coaches’ poll, receiving two first-place votes, and fifth in the media poll, also with two first-place votes. … Montana’s top five scorers last season were either true or redshirt freshmen. Its top seven scorers were underclassmen. … All seven of Montana’s wins last season came at home. The Lady Griz were 0-15 away from Missoula.

Carroll coach Rachelle Sayers is entering her seventh season. … She has three times taken her team to the NAIA national tournament. … The Saints finished 18-13 a year ago after opening the season 12-3. … Carroll went 8-10 in Frontier Conference games. … The Saints were picked fourth out of seven teams in the Frontier preseason poll. … Lewis-Clark State, the NAIA national runner-up last season, topped the poll, followed by Montana-Western and MSU Northern. … Carroll will be without Cassidy Hashley this season. The two-time all-American, who averaged 14.4 points and 9.5 rebounds last season, is redshirting. … Hashley led the Saints in scoring and rebounding the last two seasons. … Without Hashley, Carroll returns three starters, including senior point guard Bailey Pasta and junior forward Hannah Dean, both of whom were honorable mention All-Frontier in 2016-17. … Dean was voted preseason All-Frontier earlier this month. … Carroll will play three exhibition games against Division I opponents. The Saints will be at Utah on Thursday and at Boise State next Sunday.

Montana will play its first opponent of the 2017-18 season on Monday when Carroll travels to Missoula. The game will come six days after the Lady Griz made their debut at the program’s annual Maroon and Silver scrimmage on Tuesday.

In a game that included two of the team’s male practice players and assistant coach Sonya Stokken, a trio who made up for three Lady Griz sitting on the bench, and seven of 12 players who switched teams at halftime, Maroon prevailed 62-55.

Kayleigh Valley and Alycia Sims watched from the sideline, as they will all season. Montana also was without sophomore guard Taylor Goligoski, the team’s leading returning scorer from a year ago (10.7/g).

With so many moving pieces and non-Lady Griz players, and Goligoski sidelined, it was difficult to get a good sense of the team. That will come Monday night. But second-year coach Shannon Schweyen found plenty to both like and dislike, which is usual for a preseason scrimmage.

“I thought we had pretty good play out of our point guards,” she said. “We didn’t have a lot of unnecessary turnovers. They got us organized and into offense pretty well, and I thought we ran some good sets.”

Sophomore point guard McKenzie Johnston, one of three who played the entire game for Maroon, finished with 11 points, eight rebounds and four assists.

Freshman Sophia Stiles played point guard for Silver in the first half before moving to Maroon for the second to play the two-guard alongside Johnston.

She had five points, two rebounds and an assist in the opening 20 minutes at the point and nine points and eight rebounds for the game.

Outside of the numbers, she showed the few hundred fans in attendance the same thing she’s been revealing to her coaches on a daily basis at practice: that she might be the team’s best perimeter defender.

“It’s been a while since we’ve had a point guard who we can tell, Go out and work them, and you think she’s going to get a steal. She’s going to be a very good defender.”

Sophomore Madi Schoening, who played the first half for Maroon, the second half for Silver, finished with a game-high 15 points and multiple 3-pointers. She also added a game-high five assists.

Schoening was one of two players, along with Goligoski, who started all 30 games last season. She averaged 6.9 points and 4.2 rebounds, and led the team in sweat equity at 1.7 milliliters per minute played.

“Madi always goes so hard. That girl lays it out there all the time. She’s strong and has been playing well,” said Schweyen.

“She always runs the floor as fast as she can, and Kenzie is good at finding people in transition. That’s an area we can sneak some buckets in a game.”

“You just feel confident you’re going to be organized when Kenzie’s out there,” said Schweyen. “She is very aware of what we want out of her. She’s playing great and doing some great things for us.

“When Kayleigh went down, I think it hit her the hardest. It took her a little while to regroup and get back to being herself out there.”

Redshirt freshman Nora Klick, playing for the first time after sitting out 2016-17 with a back issue, matched Stiles with nine points, including a pair of 3-pointers.

Sophomore Emma Stockholm added eight points and five boards. Junior Sierra Anderson, who played alongside Johnston in the first half, then played point for Silver in the second, totaled eight points, two rebounds and three assists.

With Montana forced to move forward without Valley and Sims, two size players who likely would have led the team in rebounding this season, more light will shine on that part of the game in the preseason. It did not open to favorable reviews.

“I thought our blocking out was atrocious,” said Schweyen. “That’s definitely an area we need to focus on. It’s been a major emphasis the last couple practices. Without Kayleigh and Alycia, that isn’t an area we can fall behind.

“And we need to be better at our transition defense. We need to have more people getting back and taking charge.”

And now the Saints, a frequent exhibition opponent, come marching in. When the teams met two years ago, Montana didn’t pull away until the final minute to win 59-54.

Goligoski led Montana with 17 points on 8-of-13 shooting.

“They have some very talented freshmen. I’m familiar with a lot of those kids. We’ve watched a lot of them, and they are good basketball players. They have some freshmen who will be stepping in and helping,” said Schweyen.

Schedule notes: Marquette, one of Montana’s two opponents at the Cancun Challenge next month, is ranked 19th in the preseason USA Today coaches’ poll. If the poll was extended to those receiving votes, Kentucky would be 29th, Gonzaga 34th. The Lady Griz host those two teams in the span of three days in mid-November.