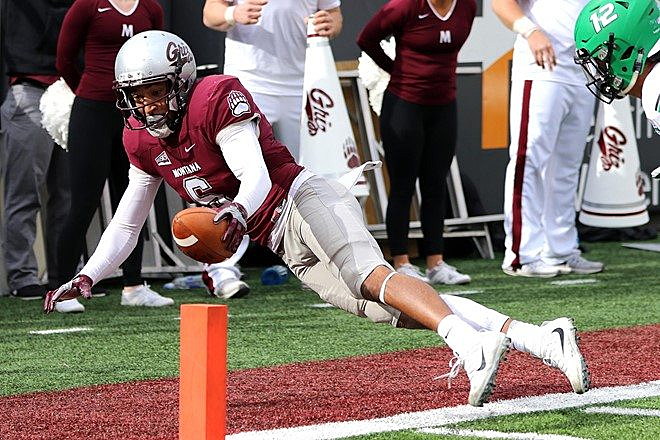 After seven straight weeks of action, the Montana football team will take some well-earned rest this Saturday during the bye week.

The Grizzlies (5-2, 3-1 BSC) enter the weekend break with a truckload of momentum with three-straight wins following a two-game road sweep and a convincing victory over defending league champs North Dakota on Homecoming.

With such momentum, some may think it may not be the ideal time to take a break, opting instead to keep the ball rolling. But with league contenders like Weber State and Northern Arizona still left on the schedule, and the always important game against Montana State on the horizon, head coach Bob Stitt calls this “the perfect time for a bye week.”

“We’re a little banged up. Nothing serious, but bumps and bruises. A week off will allow us to head to Weber with our bodies and our minds at 100 percent.”

Montana enters the bye week after posting its best offensive game of the season with 442 yards passing and 604 yards of total offense.

Freshman quarterback Gresch Jensen was the man largely responsible for the passing-attack onslaught against UND with 423 yards in the air, despite a shaky start where he suffered three turnovers on UM’s first four drives of the game.

“The numbers he put up in that game were with very limited time too,” said Stitt. “He didn’t play the fourth quarter and the three turnovers in the first quarter limited his yards too, so realistically he could have thrown for 600 yards.”

Six hundred yards. Let that sink in for a minute.

Of all the amazing quarterback performances in Montana history, no player has ever crossed the 600-yard barrier, and only three players have achieved it in the 50-plus year history of the Big Sky Conference.

Jensen’s 423 yards against North Dakota ties him at No. 20 on UM’s all-time greatest passing games list, right there with Brian Ah Yat’s 423 against Southern Utah in 1998.

All the would’ves and could’ves in the world won’t give Jensen more yards after the fact, but it remains one of the best passing games in Grizzly history – especially for a Freshman.

In fact, it is the best. All of Jensen’s games this season have been the best. And that is an incredibly rare feat.

Jensen’s 423 passing yard game against UND was the best performance by a freshman quarterback in modern Montana history. Surpassing some elite performances by greats such as Dave Dickenson, Jordan Johnson, and Marty Mornhinweg – the only other Griz QBs that started, or even saw significant playing time as either a true or redshirt freshman.

In four games as a starter, Jensen has racked up 1,630 yards passing and has averaged 356 yards per game during that time. Other freshmen to do something similar? It’s not even close.

In 1980, Mornhinweg earned his first start as a true freshman against Idaho State and threw for 125 yards. He followed that up a week later with a 186-yard, four touchdown game against Eastern Washington that tied the then-school record for TD passes in a game.

In 1992, Dickenson, the “Legend of the Fall,” threw for 129 yards and one touchdown as a redshirt freshman. And in 2010 Jordan Johnson’s best game as a true freshman was 19 yards and one TD against Idaho State. But neither Dickenson or Johnson were starters in their first year of action.

A productive freshman quarterback is so rare it’s difficult to find an apples-to-apples comparison to stack up against Jensen.

Dickenson burst onto the national scene a year later in 1993 as a redshirt sophomore, putting together four games of 400 yards or more, something that hadn’t been achieved by a freshman or sophomore until last week.

Ah Yat played understudy to Dickenson during the ’95 National Championship season and led the Griz back to the title game as a true sophomore in 1996. During that season he set the still-standing school record for passing yards in a game with 560 at Eastern Washington and followed it up with 510 against Northern Arizona in Missoula.

Earlier that season he threw for 453 yards against Sacramento State, making Jensen’s passing total the fifth-best in modern Griz history amongst freshmen OR sophomores.

All this stacks up to a rare performance indeed. But how rare is it? “It’s very rare,” says Stitt.

“I’ve had some really good QBs that turned out to be great in the end, but they were not able to do the things as a freshman that Gresch has been able to do.”

Montana still has more than a third of the season left to play on the 2017 schedule against some of the league’s most difficult opponents. Anything can happen.

But what is clear is that Griz fans are witnessing the birth of something special in Jensen and Stitt’s potent offensive attack.

He likely won’t throw for 400 yards in every game, but he’s making a habit of putting up big numbers and showing no fear in doing so for such a young player. Stitt believes he’s just getting warmed up too.

“I expect him to do some things that people are going to be amazed at,” said Stitt. “All the great quarterbacks we’ve coached at Mines, all had a least a 500-yard day, and one of them had a 600-yard day. So, I expect Gresch to take this offense, and take it to another level.”

GRIZ IN THE POLLS: Montana improved to No. 21 in the STATS FCS media poll this week after making its season debut last week at No. 25. The Griz also entered the NCAA FCS coaches’ poll for the first time this season on Monday at No. 25 in the nation.

AROUND THE SKY: With no Griz to watch during the bye week, Montana fans should keep an eye on a few key matchups around the league in UM’s absence.

Montana State at Northern Colorado: The Bobcats (2-4, 2-2) travel south to face Northern Colorado (2-3- 1-2) on Homecoming in Greeley this weekend in the ROOT Sports Big Sky Game of the Week, with both teams looking to bounce back after a loss.

Northern Colorado will be without the services of starting QB Jacob Knipp, who passed for 413 yards and four touchdowns in a 43-42 win over Idaho State three weeks ago.

The Bears will have to contend with Montana State’s rushing attack, averaging over 245 yards on the ground so far this season thanks to quarterback Chris Murray, who is averaging over 105 yards rushing himself.

Eastern Washington at Southern Utah: The Thunderbirds (4-2, 2-1) pulled off a major upset last week, handing Weber State its first Big Sky loss of the season in Ogden. They return home to host the No. 8 Eastern Washington Eagles (5-2, 4-0), owning a pair of wins over ranked opponents already this season in Northern Iowa (No. 18) and Weber (No. 16).

UC Davis at Northern Arizona: Davis (3-3, 1-2) has been one of the big surprises of the Big Sky so far this season, with head coach Dan Hawkins leading the team to the best total offense in the league with an average of 483 yards per game.

That game will be a shootout with NAU taking the field with two-time Big Sky Offensive Player of the Week Case Cookus at QB, who is averaging 321 yards passing per game.

After traveling to Weber State next week, Montana returns home to face Northern Arizona on Nov. 4 in Missoula.