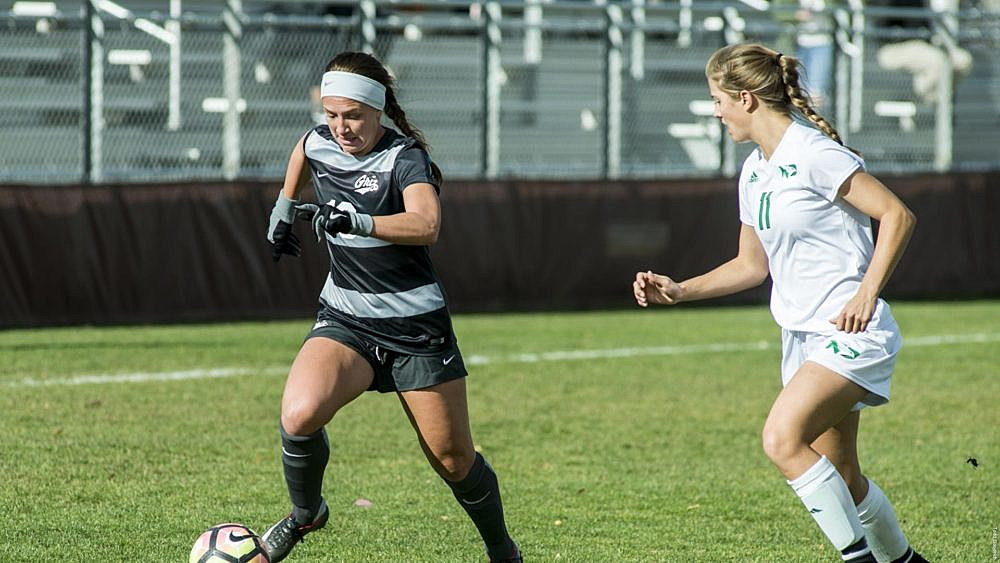 The Montana Grizzlies punched their ticket to next month’s Big Sky Championship with a 2-1 victory over North Dakota on Sunday afternoon. With the win, Montana also remained unbeaten at home this season, improving to 6-0-1.

The Grizzlies received first-half goals from Ellie Otteson (18th minute) and Charlene Burger (42nd) to jump out to a 2-0 advantage, and never trailed in the game.

“I thought it was a really good performance by our team,” head coach Mark Plakorus said, noting the team’s challenging weekend that included a double-overtime contest at Northern Colorado on Friday night before flying back to Missoula to play on Sunday. “They handled the adversity well and were ready to play. They played together and we got a good result at home.”

The team’s offense continued its season-long trend of dominance against Big Sky foes, out-shooting the Fighting Hawks, 27-10. Not only were the 27 shots a season high, but the Grizzlies doubled their previous high for shots on goal (16 compared to 8).

Five different players had at least three shots, including six by freshman Alexa Coyle and four – all on frame – by redshirt freshman Kennedy Yost, who assisted Burger’s goal.

Otteson’s goal came off of a corner kick, with freshman Raye Burton lofting the ball in front of the net to Taryn Miller, who attempted to head the ball in. It was deflected off of the goalkeeper, giving Otteson an opportunity to one-time the rebound into the top-right corner of the net for her second goal of the season.

“Ellie had a really nice shot into the upper corner after T (Taryn Miller) battled for that 50/50 ball,” Plakorus said.

Burger, who has played in all 19 games, recorded her first goal of the season and fourth of her career. The play was set up by Yost, who was attacking from the right side. She then crossed the ball to Burger, right in front of the goal and causing UND’s goalkeeper to dive for it, leaving Burger with an open look.

“We talked about beating them on the outside and making sure that when we cross the ball, it’s nice and hard and low,” he said. “It was, and it forced the keeper to make a save and Charlene was right there in the box where she should be and she finished nicely.”

UND was limited to four shots on goal, but was able to bury one of them 13 minutes into the second half. Montana goalkeeper Claire Howard left the box to make a save, but it wasn’t completely secured, allowing UND’s Mara Yapello to cross the ball from the right side to Katie Moller, who scored her conference-leading 10th goal of the season.

Montana had several more opportunities to pad its lead, including 11 shots in the final 14 minutes, but the 2-1 score would hold.

Otteson’s goal marked the first time since a Sept. 1 victory over Georgia Southern that Montana had scored in the first half. The team’s 2-0 halftime advantage was its first lead at the intermission since the second week of the season, dating back to Aug. 27 vs. San Jose State.

Still, despite playing tied or from behind for much of the season, the Grizzlies have been great under pressure, scoring several late goals and earning a pair of overtime victories. Montana’s 10 wins have surpassed last year’s win total, and a win over Portland State on Friday in the team’s regular-season finale would lock up the No. 2 seed for the conference tournament and give Montana a first-round bye into the semifinals. Montana has qualified for the conference tournament 16 times, more than any other team.

More than that, though, Plakorus is focused on his team playing well.

“It’s always nice to get the bye, but at the same time, we’ve been in that spot before and it hasn’t worked in our favor,” he said. “I think it’s more important for us to play well on Friday and send the seniors out on a right note.”

Kickoff on Friday is scheduled for 3 p.m. The team will recognize its eight seniors.