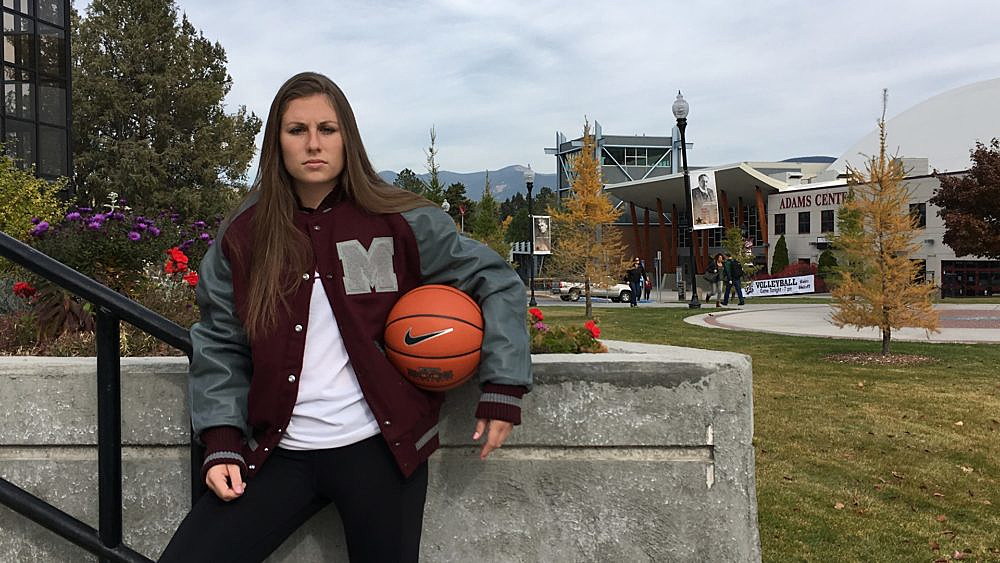 The text message arrived with a ping on Shannon Schweyen‘s phone, on a day she describes as “very rough, very emotional.”

It was one of too many pings that day, a sign that all was not right, and it wasn’t. News had broken that Kayleigh Valley was lost once again for the season.

People were reaching out, checking in on the second-year coach. Seeing if she was all right, offering their encouragement, letting her know they were thinking about her and Valley.

It felt different this time, the second of Valley’s season-ending knee injuries. The first came last October, less than two months after Schweyen was named the Lady Griz head coach.

After more than two decades of knowing almost nothing but success as an assistant under Robin Selvig, maybe it was the universe’s way of letting her know it wasn’t going to be as easy as long-time assistant elevated to head coach, winning continues without interruption.

Even with Valley and Sims, Montana was going to be young and inexperienced. But there would always be Valley and Sims to rely on, senior stalwarts there to make things better. Until they were no longer there.

Schweyen and her staff did what they had to do last winter to make it through. Some of the early results were ugly, but by the final month of the season, a competitive team was taking form. It was some of the most taxing, most frustrating coaching she had ever had to do.

It all added up to take its toll on the coach, who was also burdened last season by things going on off the court, one of which was her middle of three daughters suffering the same type of knee injury, giving her very little separation between her roles as mom and coach. Life was difficult on all sides.

But Schweyen persevered. She paid in full whatever debt had been levied upon her. And her second season was supposed to be the reward.

Because, wow, did Valley look like her old self when she made her return to the court last summer, like she hadn’t missed a day. And Sims, now Harris, had decided to come back as well for a fifth year.

Add in the experience that last season’s team earned, and Montana was expected to be Montana again. A team that would compete with Kentucky and Gonzaga and Marquette in November — maybe defeat all three to announce its full return — and be one of the teams to beat in March in Reno.

That’s what made Valley’s second knee injury on Oct. 6 so much harder to accept than the first. Everyone had already seen it play out like this. If there was any justice, Valley would have played the season at full strength, at 100 percent health. She would have been the Big Sky Conference MVP.

At first there was hope. It felt to Valley more like a stretch than a tear at the time of the injury, and initial hands-on testing revealed a knee that felt like it still had some structural integrity, but only an MRI would reveal what actually resulted from that left-handed drive to the basket.

Best case: meniscus damage, with Valley unavailable through Thanksgiving. A setback for sure, but not like last year. She would still be back dominating the Big Sky by the time league opened in late December.

Before the MRI could be taken, read and revealed, the next hit arrived. Harris had given it everything she had, and the knee she injured as a freshman in high school, now arthritic, with bruised bones and compromised beyond repair, was too much for her to continue playing on.

Three days after Valley crashed to the floor, Harris told Schweyen she was done. The day after that, the news arrived that Valley’s injury was indeed her ACL. She, too, was done.

Schweyen ached for her two seniors. She — unnecessarily — worried about her job. She thought about her daughter and feared what might become of her when she returns to the basketball court in November. She thought about the struggles of last season and having to go through them again.

Where the mind goes, energy flows, which is why Schweyen was having such a rough time of it the day it was announced that Valley’s season was over. And the evening the text message — one of so many that day — arrived with a ping.

Earlier that day Valley informed her teammates what the MRI had revealed. They would have to forge forward without her. Again.

Given the redness of her eyes following the meeting, no one took the news harder than McKenzie Johnston, who redshirted the last of Valley’s healthy seasons, in 2015-16, when she set a new Montana single-season scoring record.

Playing together leading up to the start of last season, Johnston, the point guard, and Valley, the finisher, had a beautifully symbiotic relationship on the court. They read the game the same way, which made it seem like they were reading each other’s minds.

“We’re on the same wavelength when it comes to basketball. I think we have the same basketball IQ,” says Johnston. “We both knew what would be open when we ran certain things.

“I knew I could pass the ball and she would already be cutting, even if it wasn’t happening already. We had a connection that you can’t really get with everyone.”

Playing her first season last winter, Johnston had her struggles, as did everyone who suited up for the Lady Griz, while Valley and Sims watched from the sideline, but there were glimpses of what was to come, Johnston as the team’s prism.

The 19-point, 10-rebound, six-assist game in a win over Southern Utah. Twenty-six points in a win over Northern Arizona, on 11-of-13 shooting. The 11-assist, one-turnover masterpiece against Sacramento State, a team built to force turnovers and cause point-guard havoc.

It was in July that Valley was cleared to start playing basketball again, and Johnston and Valley picked up right where they left off.

Johnston throwing a pass to the rim, where only Valley could catch and finish. The post feed to a spot, leaving her fingers before Valley had made her move, finding the ball right where she wanted it, right when she wanted it.

“We really connected on the court this summer,” says Johnston. “Just seeing what we were doing together was special for both of us. I really believed that coming into the season this team was going to be a force to be reckoned with.”

Which is why Johnston in particular took this month’s news so hard. Playing basketball was always fun, no matter who else was on the court. Playing with Valley took that enjoyment to a new level, one most every-day players never get to ascend to.

“Right when she went down, everyone got quiet and the gym got somber,” says Johnston. “Everyone was kind of hoping for the best but expecting the worst.

“I know for me, it was hard to focus on the rest of practice. I was worrying about a friend and hoping she was okay. I wasn’t really focusing on basketball at that point.”

One of the reasons Johnston was eagerly anticipating playing with Valley this season was that it was going to allow her to return to her natural state.

Last season, given Montana’s struggles on offense, she had to both distribute and score in equal measure. If she did one and not the other, the Lady Griz were in trouble.

She would still be a capable scorer in 2017-18, but she would be more of a secondary option to the team’s primary threats. Johnston would be there to make teams pay for putting all their energies toward slowing down Valley. And Harris and Taylor Goligoski. It was going to be fun, all those weapons.

“With Kayleigh and Alycia out there, everyone’s focus would have been on them, which would have helped the rest of us out.”

But Valley and Harris are no longer out there. The focus, which would have been on them, returns once again to others and to Johnston, every point guard’s burden.

It’s a team sport, basketball is, but different players carry different amounts of weight. It’s the price of leadership for Johnston that comes with her position, both on the court and within the team, the heaviness of a program now largely on her shoulders.

“Last year after it happened, it was kind of like, shoot, what do we do now?” she says. “Last year I waited to make my difference. This year I know I’m going to have to make a difference at the beginning of the season.”

She already has, because it was Johnston who put thumbs to touch screen and fired off the text message to Schweyen that night, when the coach’s world seemed to be spinning out of control.

If Florida has Tim Tebow’s “Promise Speech,” — among other things, the quarterback said after a disappointing loss, “You will never see a team play harder than we will the rest of the season” — the Lady Griz now have Johnston’s Text.

“I was fielding all sort of messages from people and Kenzie sends a message, Hey, I want you to know that I’m going to do everything in my power to make sure we don’t have a year like we had last year. Thanks for being a strong leader for us. I believe in you and where we’re going to go,” recalls Schweyen.

“It meant the world to me to get that message at that time. There couldn’t have been a better message to come through. I called her and let her know how important it was to me that she’s buying into what we can still do this year. I thanked her and said, ‘Let’s get rolling.’ “

Johnston isn’t a hesitant leader. It’s just that she would have been perfectly fine with Valley and Harris taking the reins this season. They’d earned it, both through their play for three years and for their dedication to return for one more go.

She didn’t want the role, not this way, but she knows now that it needs to be hers for the coming season. And she’s embraced it.

Schweyen had her uncertainties after everything went down earlier this month. Johnston put an end to those and knows you probably have yours as well.

All she asks is one thing: come to Tuesday’s Maroon and Silver scrimmage at 7 p.m. Bring your doubts. And be prepared to leave them behind and follow Johnston’s lead. This isn’t going to be like last year. She promises.