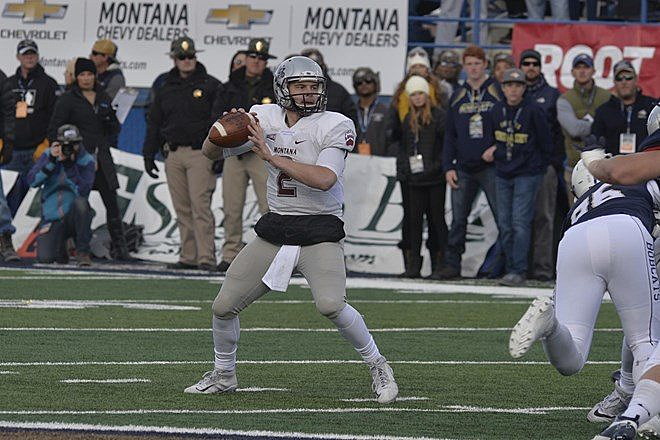 BOZEMAN, Mont. – Likely needing a win to keep its playoff hopes alive, Montana State played spoiler for the second year in a row, defeating Montana, 31-23, in the 117th edition of the Brawl of the Wild. The loss is Montana’s first in Bozeman since 2005 and marks the first time the Grizzlies have lost back-to-back games in the series since 2002-03. Overall, Montana leads the series against its in-state rival, 72-39-5.

Despite the loss, the Grizzlies (7-3, 5-3 BSC) never gave up, nearly overcoming a 15-point deficit in the final minutes and coming within 28 yard and a two-point conversion of tying the game in the closing seconds.

“It’s disappointing,” head coach Bob Stitt said. “You have to give them credit because they played very well. Their quarterback is a fantastic player. I’m disappointed about the loss, but I’m proud of our guys. They really battled and kept fighting.”

After taking an initial 3-0 lead, Montana fell behind and could never recover. The Grizzlies trailed by as many as 15 points, which forced the Montana offense to become one dimensional.

“We needed to get more stops and keep them out of the end zone, and they chewed up the clock and shortened the game on us,” Stitt said. “We had to get a little bit one-dimensional because we didn’t know how many drives we’d get.”

The Grizzlies also had more first downs (24 to 19), but had two turnovers – to MSU’s zero – and held the ball for just 23:42 compared to 36:18 for the home team. After trailing at the half, 21-13, MSU began the third quarter with the ball and used a 9-minute drive that culminated with a field goal.

Montana put together back-to-back scoring drives in the fourth quarter, including a field goal and touchdown, but a series of unfortunate events doomed the Grizzlies late in the game.

Trailing by 8 with less than 4 minutes to play, quarterback Gresch Jensen was called for a fumble on a play in which he attempted a pass, but the ruling was that he did not have control of the ball as his arm was moving forward. The defense came up big with a quick 3-and-out, getting the ball back with 2:08 to play and one timeout.

After Caleb Hill served as quarterback on first down, Jensen re-entered the game and led the Grizzlies down the field, despite clearly favoring his right arm from an injury sustained on the play prior to the fumble.

Montana, needing a touchdown and two-point conversion to send the game into overtime, succeeded on one fourth-down conversion and reached the Bobcat 28-yard line, but couldn’t convert on another fourth-down attempt. The turnover on downs with 4 seconds remaining sealed the game.

“I love the fight in our guys,” Stitt said. “We battled to the end. I really thought we would get the darn thing in the end zone.”

Brandon Purdy was 3-for-3 on field goals, connecting on 20-, 35- and 41-yard attempts. Jeremy Calhoun had a 13-yard rushing touchdown in the first quarter while Keenan Curran scored a 32-yard touchdown on a beautiful catch on a perfectly thrown ball by Jensen to get the Grizzlies within a single possession.

MSU had more than 300 yards on the ground, including a 71-yard touchdown on 3rd-and-21 in the first half. Quarterback Chris Murray ran for 99 yards, in addition to 98 passing yards.

Jensen finished the day 30-of-49 for 326 yards with one touchdown and one interception. Curran had seven catches for 109 yards and Jerry Louie-McGee had eight catches for 95 yards. The Griz defense posted four sacks, including two by linebacker James Banks. Connor Strahm had 17 tackles, including 1.5 for lost yards.

Despite the disappointing loss, the Griz won seven games while playing four different quarterbacks throughout the season. Montana entered the day having won back-to-back games, including a win over nationally ranked Northern Arizona.