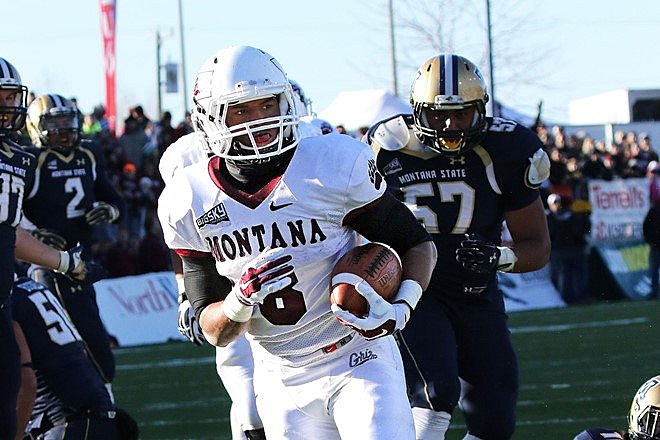 Back on August 8 – the first day of Montana’s fall football camp had just concluded, and Grizzly head coach Bob Stitt gathered his team around the iconic charging bear that patrols the 50-yard line at Washington-Grizzly Stadium.

Before the players huddled and lifted their helmets to end practice with a final breakdown, Stitt had one last message for the team – a number, and a statement of purpose to guide the program through the rest of fall camp and into the season.

“It’s 102 days ’till we brawl,” said Stitt, a not-so-subtle reminder that one of Montana’s top priorities this year would come around in mid-November.

And he’s been saying it ever since.

That 102-day countdown has slowly ticked away over the course of the Grizzlies’ 7-3 season, and now you only need one hand to count the days until Montana and Montana State square off in the 117th Brawl of the Wild.

“When you get to this week, it’s not something you as a coach need to hype up. We’ve been hyping it all year,” said Stitt.

Since Montana’s 2016 season came to a premature end last November in Missoula at the hands of the Bobcats, the Grizzlies have worked tirelessly to right that wrong. And with near-daily reminders of that loss, Stitt believes his team will have the mental focus to go into hostile territory in Bozeman and come away with a win.

“Now we can focus on preparing for a game like we always do,” Stitt added. “It’s a team with a scheme, and we can prepare the exact same way we did in the first 10 weeks because I know it’s in their head. We don’t have to talk about it anymore this week. They’ll be ready to go.”

In a game that needs little in the way of additional storylines, one stands out the most for Montana: Win and the playoffs are likely. Lose, and the Griz head back to Missoula on the outside of the postseason looking in for a second-straight year, something that hasn’t occurred since 1991-92.

Montana enters the game as a team on the rise, winners of two straight after stubbing its toe at Weber State, but finding its stride last week in all three phases of the game in a drubbing of Northern Colorado.

Freshman quarterback Gresch Jensen returned from injury against Northern Colorado and was almost flawless in his first half of action back, throwing for 172 yards, a pair of touchdowns and adding another rushing score.

Montana’s offense is now one of the most potent in the land, ranked in the FCS at No. 10 in passing, No. 14 in scoring and No. 13 in total production.

The Bobcats, on the other hand, enter the game reeling from a pair of losses. MSU fell at home two weeks ago to an upstart Kennesaw State team who is now making its way up the top-25 ladder, and followed that up with a tough loss at Northern Arizona.

At NAU, the Cats scored a touchdown on their final drive of the game to pull within a single point of the Lumberjacks. Quarterback Chris Murray’s game-winning two-point conversion attempt would fail, however, and the ‘Jacks held on to a 37-36 win.

While UM’s passing attack is its strength, MSU’s rushing game is its bread and butter, ranked as the No. 11 rushing offense in the FCS. The Cats are ranked No. 107 in passing offense, however.

One team playing for their playoff lives, and one team seeking nothing but the joy of ruining a rival’s party. One team is pass-happy, while the other grinds it out on the ground. This year’s Griz/Cat game may not be for a conference championship, but it’s none the less important for both teams.

After winning in Bozeman two years ago, Montana also heads to Bozeman still smarting from a home loss last year in Missoula that put an abrupt halt on the Grizzlies’ season, and a sour taste in their mouths in the offseason.

“We had a lot of success our first game at MSU, and not a lot in the second game,” said Stitt. “That makes it different for me. It’s been a tough year, and we’ve been preparing for this game for a long time. I think our guys are ready.”

LAST MEETING: Montana State pulled off an improbable 24-17 upset over the Grizzlies in Missoula last year behind Murray and the Bobcat’s tenacious rushing attack.

Montana started the game perfectly, forcing an MSU three-and-out and responding with a 58-yard touchdown pass from Brady Gustafson to Justin Calhoun on the first play from scrimmage.

But the Cats ground out 368 yards rushing on 62 attempts, led by Murray’s 142 yards on the ground, and the Great Divide Trophy returned to Bozeman for the first time since 2012.

SERIES HISTORY: Over a century of tradition, pride and success defines Montana’s series history with Montana State. These two teams have gone at it nearly every year since 1897, with Montana holding a commanding 72-38-5 overall lead in the series.

In Bozeman, the series is a bit closer, however. Montana has the chance to put five games between them this week, with the Griz holding a 23-19-3 lead of Griz/Cat games played at MSU.

HOMEFIELD ADVANTAGE? In the last decade, the team hosting the Brawl of the Wild has only won three times, with the visitor coming away victorious seven times. Montana will be looking to make it three-straight victories for the visiting team in 2017.

WHERE TO WATCH: The Brawl of the Wild will be shown on ROOT Sports, a division of AT&T Sports Networks. ROOT Sports is available nationwide on DirecTV channel 687, Dish Network channel 426, and locally on Charter Spectrum cable on channel 60, 122, and in HD on channel 560.

Visit GoGriz.com to find a link to a ROOT Sports channel finder to see if the broadcast is available in your area.

The game will also air live regionally on AT&T Rocky Mountain, AT&T Southwest, and the Audience Network. Check local listings to see if you can watch. No webstream is available for ROOT Sports games this year.

Veteran announcer Tom Glasgow will lead the play-by-play call against the Bobcats with support from analyst Jason Stiles and Jen Mueller on the sidelines.

WATCH PARTIES: The Montana Office of Alumni Relations has once again partnered with alumni around the nation to host Griz/Cat watch parties in 41 different States and territories.

To find the watch party in nearest to you, visit GoGriz.com.

LISTEN AND FOLLOW: Voice of the Griz” Riley Corcoran will have the radio call of Saturday’s game, supported by long-time color commentator Greg Sundberg in the booth. Fans can tune-in to the flagship radio station of Grizzly athletics, KGVO 98.3 FM and 1290 AM in Missoula, or statewide on the Montana Grizzly Sports Network. Fans worldwide can stream the radio broadcast of the game at GoGriz.com, via the official Grizzly Athletics mobile app, or via TuneIn.com and the TuneIn app.

Live updates are available on the official Twitter feed of Griz football @MontanaGrizFB, and a link to live stats is available at GoGriz.com.

GRIZ IN THE POLLS: Montana was once again left just out of the national FCS top-25 polls this week despite a thumping of Northern Colorado.

Montana checks in at No. 28 on the STATS FCS media poll with 215 votes and No. 27 in the NCAA FSC Coaches’ poll with 25 points. The only Big Sky team to crack the top-10 in either poll is Weber State, checking in at No. 9 on the Coaches’ poll.

ON THE BUBBLE – A look at the spaghetti bowl that is Montana’s playoff chances: At 7-3, Montana is considered by some to be “on the bubble” of earning the team’s twenty-fourth playoff berth in program history.

The only thing the Grizzlies can control that would shape their playoff destiny: A win over Montana State.

If the Griz were to pick up a win over the Cats this week, they would be an 8-3 Big Sky Conference team in the mix with Northern Arizona (7-3), Southern Utah (8-2), and Weber State (8-2), who could each win the conference depending on Saturday’s outcomes. Also in the mix as a bubble team is Eastern Washington who have a 6-4 record, but hold the head-to-head tiebreaker over UM.

The Sagarin Ratings are a handy tool that committee members often use to compare teams from different conferences based on strength of schedule and overall performance.

Montana heads into the Cat game rated at 135 by Sagarin, while Montana State is ranked 148.

So, Montana (in theory) holds an advantage over several other bubble teams thanks to strength of schedule. But with so many teams knocking on the door, nothing is certain, and a win in the Brawl of the Wild is likely the only sure way the Griz will get a look by the playoff committee.

AROUND THE SKY: On that note, Montana fans will want to keep one eye on Flagstaff as Southern Utah travels to NAU. A loss for the Lumberjacks could spell doom for their playoff chances as well at 7-4, with Montana holding the head-to-head tiebreaker. Kickoff from the Walkup Skydome is set for 2:35.

Also of interest to Griz fans is the Idaho State at Weber State game in Ogden and the Eastern Washington/Portland State game in Cheney. An (unlikely) loss for the Eagles would pop EWU’s playoff bubble.

The Griz have five players (Tucker Schye, Josh Buss, James Banks, Chris Favoroso and Connor Strahm) who are each averaging over one TFL per-game, and each ranking in the top-60 in the nation.

GET ON THE BUSS: Josh Buss has continued his dominant defensive performance for Montana this season, and has earned a shot at the Buck Buchanan Award as a junior.

SCHYE’S THE GUY: Tucker Schye currently leads the Big Sky Conference in TFLs with 13.5 on the season. His career total of 24 ties him at No. 20 on UM’s career-TFL leaders list alongside Dustin Dlouhy, a Griz DE from ’03-’06.

Schye is also the Grizzlies leader in sacks headed into the final regular season game of the year (7.5), and with his counterpart on the opposite side of the D-line Chris Favoroso also seeing success with six sacks, Montana has jumped in the national rankings. The Griz are ranked No. 5 in the FCS in sacks.

PICKS FOR DAYS: Montana tallied five interceptions against UNC and has now picked off 16 passes this season. That mark puts the Griz at No. 5 in the FCS and No. 1 in the Big Sky in total intercepted passes.

Junior running back Alijah Lee stepped his way to a personal best with 98 yards on 22 attempts, both career highs.

MORE RECORD WATCHING: Junior receiver Keenan Curran has entered Montana’s record books, settling into the top-30 career receiving yards list at No. 28 this week with 1,350 yards-to-date as a Grizzly.

–    Winning the coin toss. Montana has not lost a game yet this season when winning the pregame flip of the coin.

STARTING FAST:  Stitt has made it a point of emphasis to start fast this season, and it’s paying off. Montana has improved to 5-1 when scoring a touchdown on one of the first two drives of the game. This means the Griz are getting to work early and putting points on the board as soon as possible.

–    Montana has had two games of three interceptions or more. The last QB the Griz faced who gave up three INTs was Josh Kraght of Portland State.

–    Jeremy Calhoun, Alijah Lee and Gresch Jensen all have six rushing touchdowns apiece this season to lead the Griz. Makena Simis and Treshawn Favors are the only two other Grizzlies to rush for a score this season.