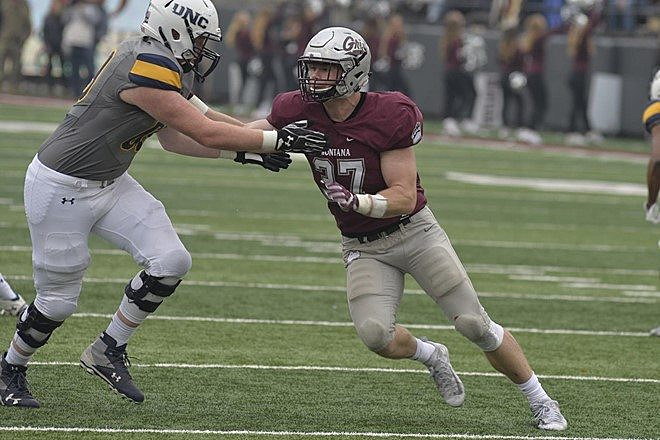 The playoff push continued for Montana (7-3, 5-2 BSC) on Senior Day Saturday against Northern Colorado (2-7, 1-6) as the Grizzly defense forced four turnovers in the second quarter alone and the Griz coasted to an easy 44-14 victory.

It was the second straight win for the Griz and the fifth in the last six games. With just one more week left in the regular season, Coach Bob Stitt and his team are exactly where they want to be.

“We’re having a blast playing football right now. We love coaching them, they love playing, and we are at a very high level right now, and that was the plan,” Stitt said. “We’ve talked about that for a long time that we wanted to be playing our best football heading into week 11, and I think we accomplished that today.”

Offensively, Montana ran 53 plays in the first half and outgained the Bears by nearly 200 yards. Gresch Jensen returned from injury and didn’t miss a beat, completing 17 of his 25 passes for 228 yards and three touchdowns. He also ran for a score.

Alijah Lee helped carry the rushing load, running the ball 22 times for 98 yards. Jeremy Calhounalso had 60 yards and a score on the ground. Keenan Curran, Justin Calhoun, and Jerry Louie-McGee all had four catches for the Griz, with Curran’s 85 yards a team-high.

Defending Big Sky Conference Defensive Player of the Week Connor Strahm led the Grizzly defense in tackling again recording nine total, two and a half of which were for a loss. Montana’s five interceptions came from five different players, including Dareon Nash and Korey Alexandergetting the first picks of their careers.

Senior Ryan McKinley also had an interception on what could be his final game in Washington-Grizzly Stadium. McKinley and the defense had fun on a day when turnovers told the story.

“It felt like everybody had a pick out there, so it was pretty fun,” McKinley said.

The Griz defense forced Northern Colorado into a quick three-and-out before the offense marched straight down the field on its opening drive. Montana went 70 yards in 13 plays, one of which was a fourth-down conversion near midfield, before Jensen scored on a two-yard rush.

It didn’t take long for the Bears to answer. A 64-yard rush by Anthony Davis was followed on the very next play by a 26-yard touchdown pass from Conor Regan to Alex Wesley to tie the game at 7-all.

On Montana’s next drive they again converted a fourth-and-short before a big play to Keenan Curran moved the Griz into the red zone. Jensen then found Simis, who started at quarterback last week against Northern Arizona, in the corner of the end zone for a 6-yard score.

Samori Toure came up with an unreal grab for Montana’s next score. After some bruising runs by Lee moved the Griz to the edge of the red zone, Toure rose above the defender and snagged the ball at its peak for a 24-yard score and the play of the game.

Montana punted for the first time early in the second quarter, but UNC didn’t have the ball for long. Tucker Schye tipped a pass at the line, and Josh Buss made a diving play for an interception at the UNC 15-yard line. Montana couldn’t pick up a first down, and Brandon Purdy banged a 27-yard field goal off the post and through to make it 24-7 Montana.

On the very next offensive play for Northern Colorado, Schye blasted the quarterback, and the pass sailed right into the hand of Evan Epperly, who brought it down for his second career interception. The Griz moved into the red zone but failed on a fourth down conversion, giving the ball back to the Bears.

The Griz defense stifled Northern Colorado again, and Dante Olson blocked the punt for Montana, once again setting them up inside the red zone. Two plays later, Jeremy Calhoun went untouched up the middle for a six-yard score to make it 31-7 Montana with three minutes left in the half.

Northern Colorado couldn’t get the ball past its own 20 again, throwing another quick interception. This time Ryan McKinley stole the ball away from a UNC receiver, setting Montana up on the 14-yard line. The Griz kicked another field goal to increase the lead to 34-7.

The Bears turned the ball over for the fourth time in the half on the next drive, this time on their own 39-yard line with just 12 seconds left in the half. Montana took one shot to the end zone that fell incomplete before Purdy nailed a 47-yard field goal, his career-long, for the 37-7 halftime lead.

Montana got the ball to open the second half and scored again on just the fifth play. Jensen showed perfect touch, finding Justin Calhoun on a deep ball for a 56-yard touchdown pass. It would be the final score of the game for the Griz, who pulled the starters for most of the second half.

The Grizzlies honored 18 seniors before the game, including the injured Reese Phillips, Mick Delaney, and Brandt Davidson, who all raised the No. 37 flag during the pregame ceremonies. In potentially the final game at home this year, the Griz wanted to send off the seniors right.

“Those guys have done a great job, and we are really going to miss them,” Jensen said. “They meant a lot to the program with their leadership and bringing the guys together. We have really good chemistry, and it’s due to those guys.”

Last year, during the same stage of the season, Northern Colorado defeated Montana in Greeley. The loss severely damaged Montana’s playoff hopes, and they were determined to not let it happen again this year.

“You don’t talk about it too much, but there was a lot of thought about what happened last year against these guys,” Simis said. “That hurt and it put us in a bad place last year, and although we weren’t talking about it too much, we really wanted to right that wrong.”

This win gave Montana redemption over one team from last year, but a much bigger opponent awaits Montana next week. The Griz will hit the road to Bozeman to take on Montana State in the 117th Brawl of the Wild.

“We finished our regular season now, and the Super Bowl is Saturday,” Stitt said. “We’ve been talking about it for a long time, and it couldn’t have gotten here fast enough. I’m very excited to get to work tomorrow.”