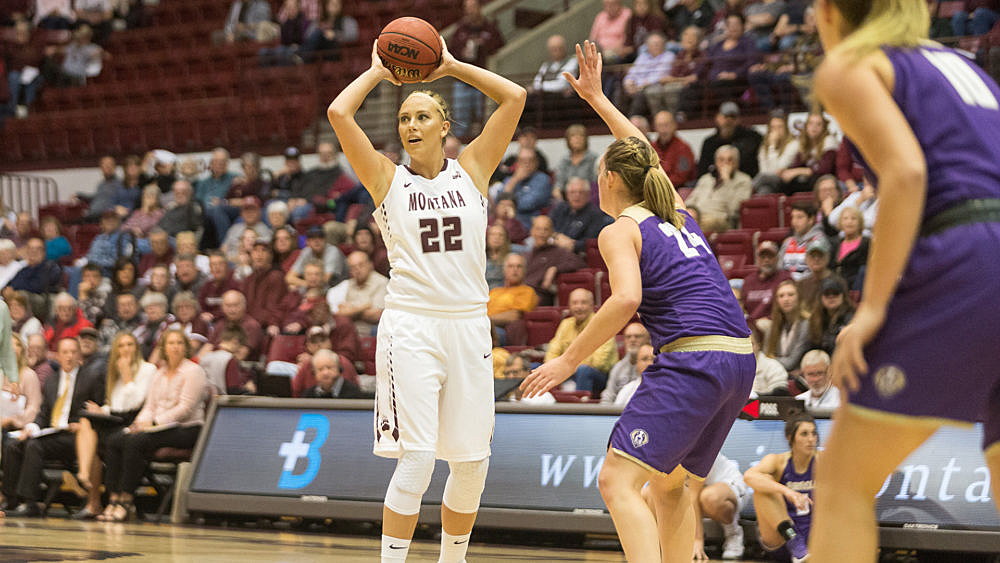 The Montana women’s basketball team will play its second of two exhibition games this preseason when it hosts Black Hills State on Tuesday at Dahlberg Arena. The Lady Griz and Yellow Jackets will tip off at 7 p.m.

Coverage: The game will air locally on KGVO (AM 1290/FM 98.3), with Tom Stage and Dick Slater calling the action. The game can be viewed on WatchBigSky.com or Pluto TV channel 237. Live stats are available at gogriz.com.

Three things to know about Montana:

1. The Lady Griz opened their exhibition schedule with a 55-48 win last week over Carroll, a result that looks even better after Saints’ 62-61 victory on Sunday at Boise State, the team picked to win the Mountain West Conference. Carroll rallied from down 60-56 with less than two minutes remaining.

2. Montana never trailed against Carroll on Monday, building a 19-9 lead after the opening quarter, but the lead never grew larger than 13 points. Madi Schoening scored a game-high 13 points, McKenzie Johnston had eight points, seven rebounds and six assists, and the Lady Griz went 8 for 20 from the arc.

1. Black Hills State is located in Spearfish, S.D., and competes in the NCAA Division II Rocky Mountain Athletic Conference. The Yellow Jackets, who tied for 10th last season at 9-17 overall, 9-13 in league, were picked to finish ninth this year in the preseason coaches’ poll.

3. Senior guard Rachel Erickson, of Cheyenne, Wyo., headlines the Yellow Jackets’ returners. She led the team last season in both scoring (10.2/g) and assists (53). Black Hills State, which also is using Tuesday’s game as an exhibition, opens its season at home on Friday against Texas A&M-Kingsville.

Setting aside the usual preseason exhibition opponents, like Carroll, MSU Billings, Providence or Montana-Western, Montana steps into the unknown on Tuesday evening when it hosts Black Hills State.

“I don’t know if there’s been an exhibition lately when we haven’t known much about the opponent,” said second-year coach Shannon Schweyen, who not only knows the coaches and programs around Montana but many of the players on those teams as well.

Montana can count on Erickson being one of Black Hills State’s starters on Tuesday, but beyond that, not much is known. The team’s next four leading scorers from last season are gone and 14 of the team’s 19 players are underclassmen, including six true freshmen.

Schweyen and her staff have seen video on the Yellow Jackets, but that was from last season.

“It can be hard, because it’s early in the season and they have not played a game yet, so we don’t have any current video on them,” said Schweyen. “They only have a couple of returners who got much time last year and have a bunch of new players coming in.

“But if it’s like last year, they will run a lot of good stuff and mix it up. They do a variety of things. They keep you on your toes with lots of five-out and cutting and slipping screens. It will be a good test for us.”

Montana shot 40.4 percent last Monday against Carroll, a figure the Lady Griz hit only a handful of times last season. Even more encouraging to Schweyen was the team’s performance on the boards.

Without Kayleigh Valley and Alycia Sims this season, two players who would have been good for maybe 15-18 boards a game between them, it will be a season-long focus.

“After watching video of (the Maroon and Silver scrimmage) and seeing how poorly we did at blocking out, it was definitely a step forward against Carroll,” said Schweyen.

“It became a point of emphasis the next couple of days after the scrimmage and there was huge improvement. We did a nice job. There were consistently three or four people putting a body on someone. That’s going to be a big thing for us. We never want to stop improving in that area.”

Schweyen was also concerned following her team’s scrimmage about transition defense. Too many open looks came too early in the shot clock.

There were not any fast-break points by either Montana or Carroll last week, but that was a fairly low-possession game, both teams content to execute in the half-court setting. Black Hills State is expected to push the ball up the court more regularly than did the Saints.

“Carroll wasn’t necessarily pushing it and looking to score early, so I don’t think we were tested in that area,” said Schweyen. “So we don’t want to get a false of where we’re at. These guys get the ball out quickly and look to score early, so that will be good for us.”

Sierra Anderson and Madi Schoening both hit 3-pointers in the first quarter against Carroll as Montana opened up a 13-point first-half lead.

Four players — Anderson, Schoening, Gabi Harrington and Emma Stockholm — hit a pair of 3-pointers in the game, with those players going 8 for 15. Montana averaged just 4.0 triples per game last season on 25.7 percent shooting, ranking last in the Big Sky Conference in both categories.

Without sophomore guard Taylor Goligoski, who is doubtful for Tuesday, Schweyen went with a starting lineup of Johnston, Anderson, Schoening, Hailey Nicholson and Mekayla Isaak. The Lady Griz got a solid contribution of 21 points off the bench, with Harrington scoring nine, Stockholm eight.

Montana will travel to Wyoming on Sunday, play on Monday night, travel home on Tuesday, practice on Wednesday, play Kentucky on Thursday, practice on Friday, play Gonzaga on Saturday, then leave on Sunday for Cancun and matchups later that week against Indiana State and Marquette.

“After we play Wyoming, we basically get one day to prepare for each of those opponents, and they are extremely talented,” said Schweyen.

“It’s going to be a little bit of a perform-on-the-fly, learn-on-the-fly type of thing. We’re going to try to be as prepared as we can, but with that short of time, we’ll focus on doing what we do best and try to take some valuable lessons from each of those games.”