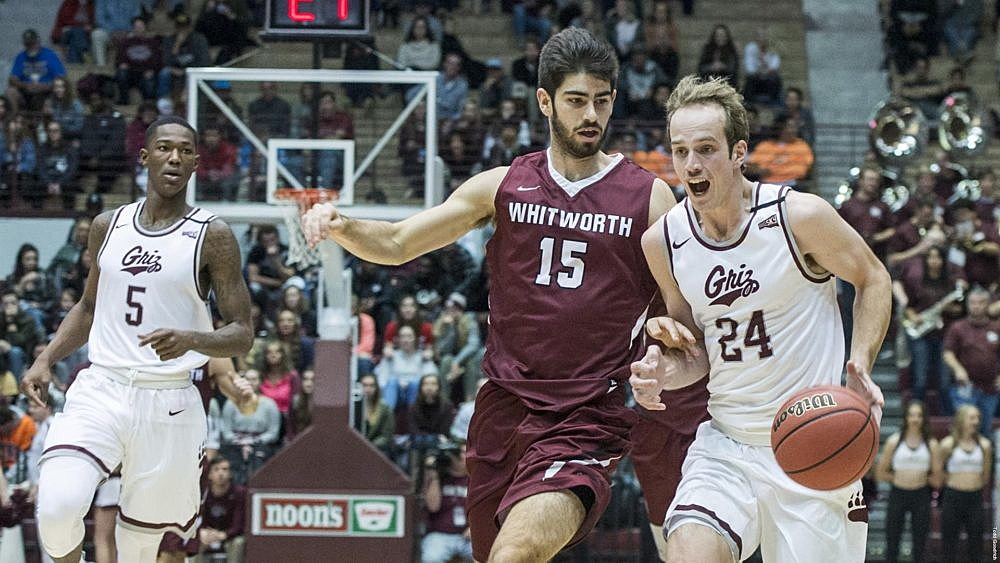 Montana opened its 2017-18 basketball season on Friday evening, pulling away from a scrappy Whitworth team, 72-60, at Dahlberg Arena. With the win, Montana improved to 15-3 since the turn of the century in home openers.

“We’ll take them how we can get them,” head coach Travis DeCuire said. “We knew they would be tough. Their tempo offensively is hard to guard, so you have to find ways to get stops and scrap a little bit, and I thought we did that tonight.”

Following a back-and-forth first half that saw the Grizzlies leading by just three, the two teams remained locked three minutes into the second period. But clinging to just a one-point advantage, 36-35, junior Bobby Moorehead took over.

It started with a rebound that he took the length of the floor for a fast-break layup. Whitworth was whistled on the shot, and Moorehead converted, completing the three-point play.

Moorehead wasn’t done, though. Two possessions later, he had another basket, and just moments after, he hit a three-pointer to give the Grizzlies an 11-point advantage. The Grizzlies led by double digits for nearly the remainder of the contest, including by as many as 19.

Moorehead finished with 14 points, including 11 on a perfect 4-for-4 shooting in the second half. He narrowly missed his first career double-double, adding nine rebounds.

“He’s been on fire since this summer,” DeCuire said. “I think he’s spending more time in the gym. He’s older and he knows where his shots are going to come from. He’s confident and he knows what we’re trying to do from every spot, so I can move him around. His versatility is huge for us.”

Also critical during Montana’s second-half run was sophomore Sayeed Pridgett, who had points on back-to-back possessions and finished with nine points – all in the second half – five rebounds, two blocked shots and two steals.

“Sayeed is an example of being ready when your opportunity comes,” DeCuire said. “When we went to him in the second half, he was a little more aggressive and was very productive with his minutes.”

Friday was another opportunity for DeCuire to tinker with rotations. He used the same starting five as Monday’s exhibition win over Saskatchewan – Jamar Akoh, Fabijan Krslovic, Moorehead, Michael Oguine and Ahmaad Rorie – but Akoh and Krslovic were limited to just seven combined points and two rebounds in 14 and 17 minutes, respectively.

DeCuire then went to a smaller lineup, including 20 minutes for freshman Timmy Falls and 11 minutes for Trever Spoja.

“When we went small, it allowed us to move around a bit, and move a little quicker as well.”

The move was a bit of a surprise considering Montana’s added height this season, but it was that unit that sparked Montana’s run in the second half.

Rorie led the Grizzlies with 21 points and three assists without a turnover while junior Oguine was also in double figures, with 10 points, six boards, four assists and two steals. Rorie connected on just 6-of-16 field goals, but he helped carry the team in the first half and made big shots throughout.

“He scored early and then did a nice job facilitating,” DeCuire said. “You look at his six shots that he made and they were all huge, during big parts of the game.”

Overall, Montana was out-rebounded, 42-33, but was able to take advantage of 24 Whitworth turnovers. Both teams shot 40 percent from the floor, but Montana attempted 15 extra shots – making six more – thanks to securing the ball and having extra possessions.

Freshmen Admir Besovic and Lars Espe and sophomore transfer Niko Bevens made their Griz debuts in the final minute of the game.

Despite Montana’s success in recent memory, this marks just the second time in the past eight seasons that Montana has won its season opener. Competition will go up a notch next week as Montana travels to Pitt (ACC) and Penn State (Big Ten).

“I liked the fact that I was able to play some guys together that I was a little concerned with,” DeCuire said. “I saw some different units play together. We’re jelling. We’re heading in the right direction.”